On Thursday, Alex Albon's red hairdo spread through the Barcelona Formula 1 paddock like wildfire as the Williams driver helped dye fellow team members. Barcelona's red hair craze was not just a bit of innocent fun though, but the result of Albon putting his weight behind a heart-warming charity push in Thailand.

When former Red Bull and Toro Rosso driver Albon was signed by Williams it seemed like a coup for both parties. For Albon, a way back into a race seat after spending 2021 on the sidelines. And for Williams it presented a chance to fill the void left by the Mercedes bound George Russell with a fast and experienced replacement.

But a quirky twist of fate surrounding Albon's Williams drive also presented him with a chance to start making his mark outside the cockpit.

Since his ascent through the ranks to become Max Verstappen's teammate at Red Bull halfway through 2019, Anglo-Thai driver Albon has become a celebrity in Thailand, the country he represents on his racing licence.

But by signing for Williams he found out from team boss Jost Capito that he now gained another connection to his mother's native country.

Capito's younger brother Volker has been a Bangkok resident for over two decades. In the '80s he was part of the crew when his brother Jost and their father won the 1985 Paris-Dakar for trucks.

While Jost continued a successful career in motorsport, which included stints at BMW, Sauber and Volkswagen, the Dakar sparked Volker's sense of adventure as he moved to Thailand to run an event planning consultancy. With his logistical expertise he is a pillar of large scale events such as the annual Race of Champions, but otherwise he isn't involved in racing like his brother.

Since 2004 Volker has made it his personal mission to help out the roughly 2500 underprivileged children that call home the Wat Sakaeo orphanage, some 100km north of the sprawling Thai capital. 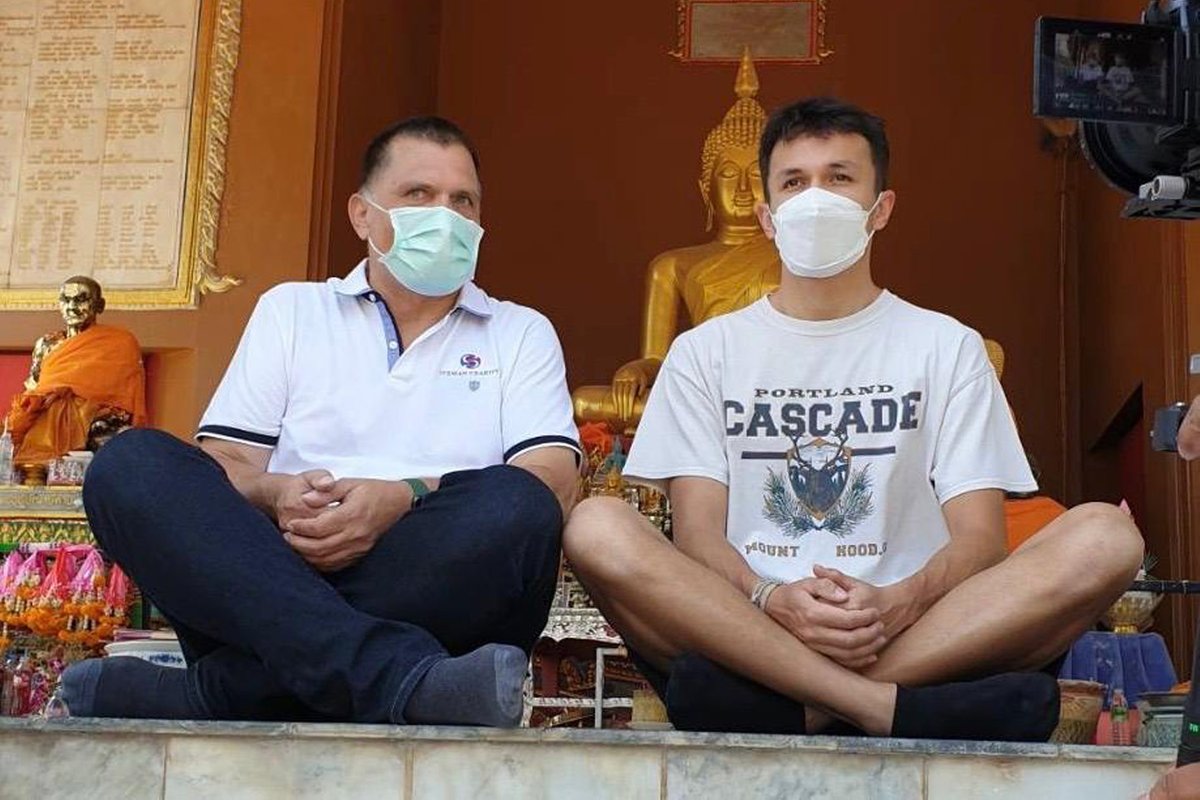 After an orphanage visit in April, Alex Albon threw his support behind the Iceman charity set up by Volker Capito (left), the brother of Williams team boss Jost Capito

In the Buddhist country, New Year's Eve doesn't merit the celebration it does abroad, but many people use the occasion to do a good deed. To mark the start of 2004, Capito and a friend decided to donate 25kg of rice to the Wat Sakaeo orphanage. Next time around, Capito donated 2500 ice creams instead, which earned him the nickname Iceman from the children.

"I saw an immense need in the orphanage," recalls Capito. "I thought, these kids probably never had an ice cream, so next time I organised to bring ice cream instead. Let me tell you, it was a big challenge to try and get 2500 ice creams in without melting...!

A tradition was born and through the inevitably named Iceman Charity Capito continued to ramp up his involvement in the orphanage, from ensuring there's enough food coming in to feed 2500 mouths to improving the orphanage's facilities, which had quickly grown after the devastating 2004 tsunami that ravaged South East Asia and left many children both without a home or parents.

While the school is paid for by the government, the orphanage relies on outside donors to raise the living standards above the bare minimum. Over the years, Capito's Iceman charity has raised around 80 million Baht, roughly 2.2 million euro in today's money.

When Albon joined Williams, Capito was quick to point out the quirky coincidence that connected his new driver with his brother's extraordinary story, and when Albon was due to pass through the country in April ahead of the Australian Grand Prix, a visit to Wat Sakaeo was set up. 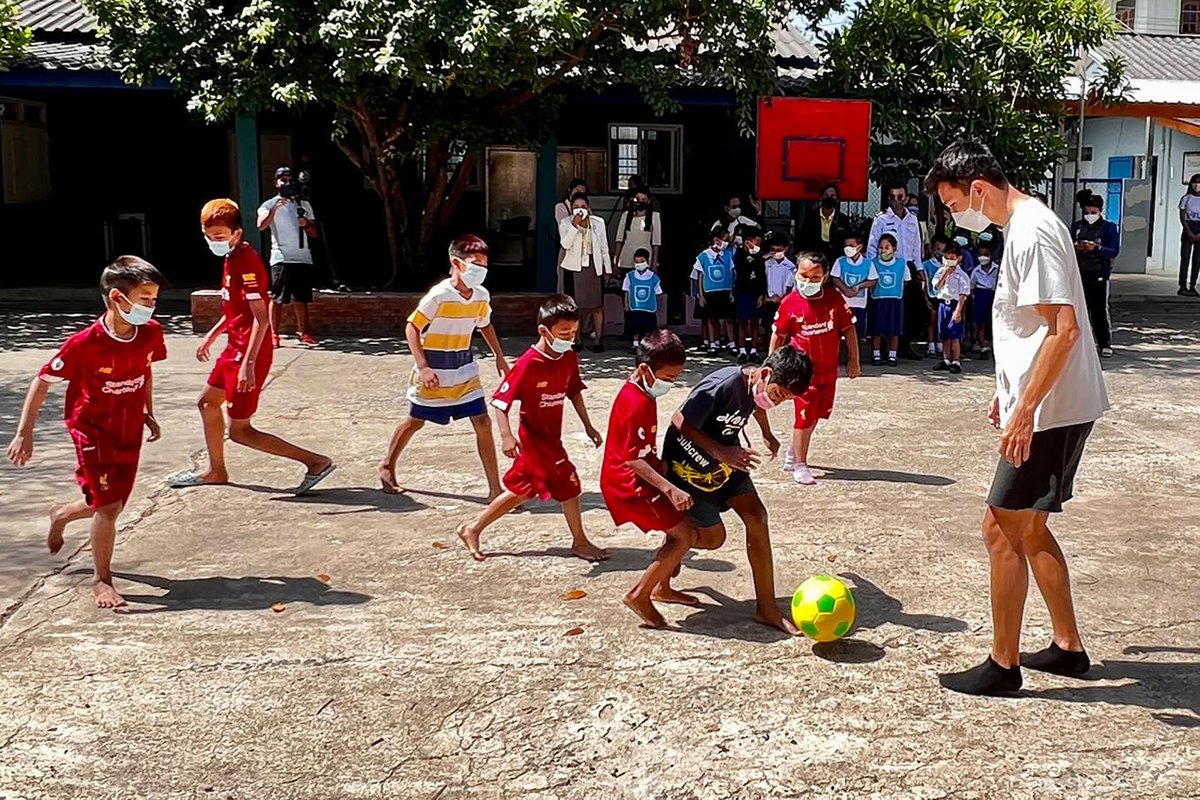 Images emerged of Albon playing football with the kids and taking his time to help distribute lunch - of course, with ice cream as a dessert treat - and he was blown away by the orphans' positive outlook and self-discipline.

"Jost was talking to me about his brother's charity. He showed me the stuff they were doing and it is massive. It really is a huge village. And I had to go see it, so we made a day trip to go see the orphanage," Albon told Motorsport.com in the Spanish GP paddock.

"What impressed me the most was how grateful they were for everything despite their backgrounds, some have had terrible childhoods, whatever it may be.

"The imagery was really powerful, seeing these young kids being grateful and smiling. That will really stay with me.

"It hit me quite hard. How they can they be so positive? And that's testament to what they're doing at that orphanage.

"I'm not sure if it's part of just Buddhism in general, but you have to think that there's maybe one adult per at least 50 kids. The kids have to be well behaved. And they do their chores, they make their beds, the place is spotless, it's really impressive and they've done a great job to make it sustainable." 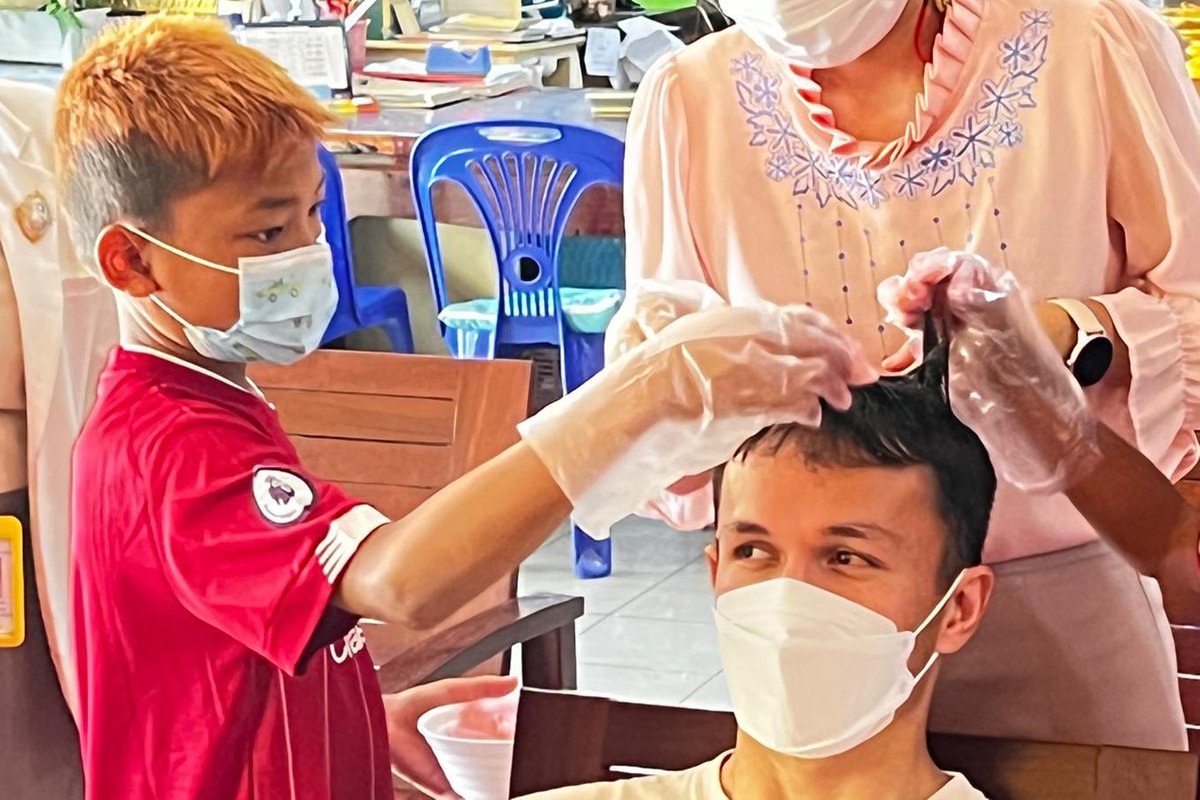 Wat Sakaeo aims to prepare children for adult life on the outside by teaching all sorts of life skills in addition to the more conventional language and maths classes, and as Albon found out first hand, hair dying is part of the curriculum on special occasions.

"These kids were Liverpool fans; in Thailand, Liverpool and Manchester United are like the biggest teams out there. Red is also a lucky colour in most of Asia, so the kids wanted to dye my hair. And of course, I just had to say yes.

"I spent the rest of the trip back to Bangkok with my hair still being dyed. We went straight to meet the Thai Tourism Board. They're quite big people... and my hair was glowing red! So, that was kind of the start of it, and then we had a great race in Melbourne. So yeah, the tradition continues."

It's clear that rather than performing a one-off PR exercise, Albon's heart is really in it. When he played football with the barefoot kids, he took his shoes off so both he and the kids would be on the same level. That's also why he instantly agreed to have his hair dyed, so he would have matching hairdos with the Liverpool supporting boys. A powerful gesture that was greatly appreciated in Thailand. 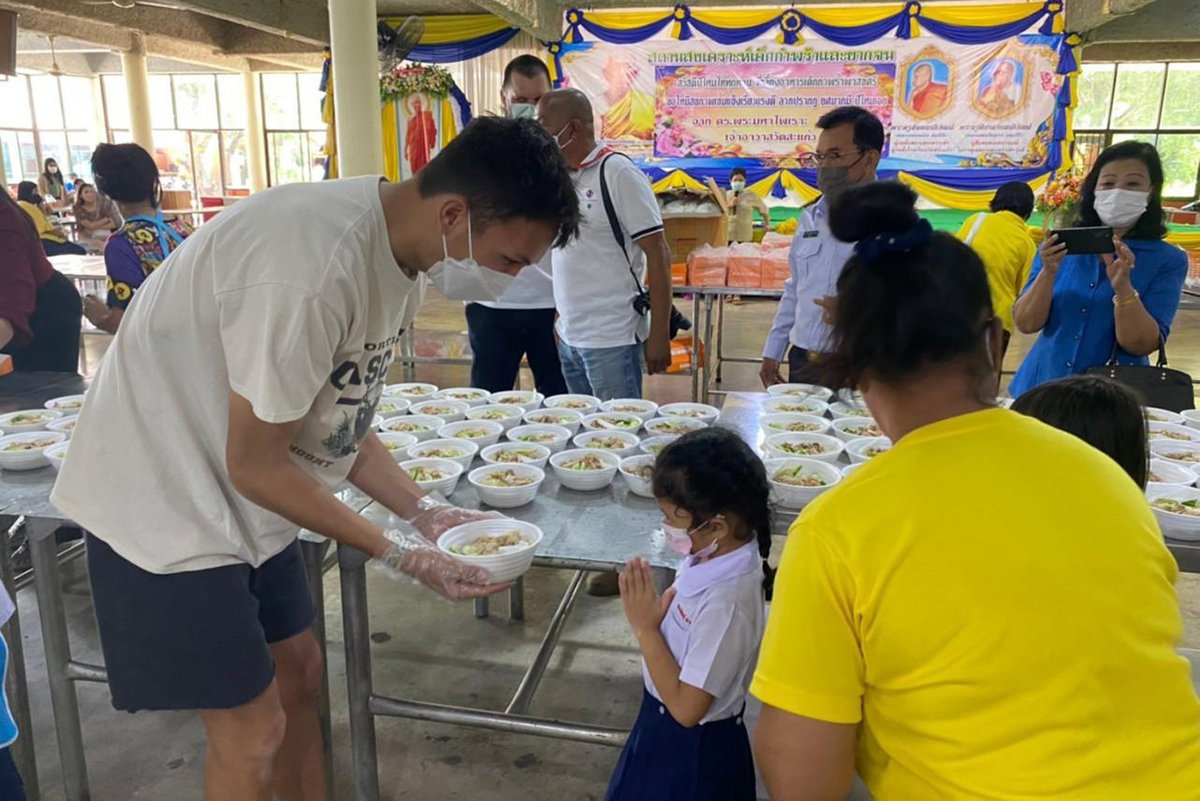 Whether positive karma or harmless superstition, red-haired Albon went on to take Williams' first point in Melbourne and then added two more in Miami.

The results were greeted by plenty of excitement in the orphanage, not in the least because since the start of 2021 team principal Capito agreed to make a personal donation to his brother's charity for every point his Williams team scores.

"I talked to Volker quite often because we're very close," Jost Capito told Motorsport.com. "And I said look, I want to be successful, and we do a certain amount per point that I donate to the orphanage. So, they were very happy after Spa [where Russell took a shock second place in a rain race halted after three laps]!

"If you go there and you see 150 boys living in one room and that's all they have, it's not easy to see that and I really appreciate what Volker is doing there."

Both in the orphanage and in the Barcelona F1 paddock red hair has since become a craze, with Williams setting up a booth outside its motorhome providing a free "Albono" hairdo, an offer several Williams team members - including Capito - and other paddock dwellers took up on Thursday.

But Albon's contribution to the cause doesn't just stop with a can of hair dye. Both he and Jost have become the Iceman charity's patrons and have thrown their support behind the charity's latest fundraiser to renovate the orphanage's barebones sports hall, which will be renamed the Alex Albon Hall upon completion.

The introverted 26-year-old might have been initially reluctant to embrace his celebrity status in Thailand, but the orphanage visit has crystallised a way he can use his raised profile to make a difference.

Inspired by watching his colleagues Lewis Hamilton and Sebastian Vettel champion topics like diversity and climate change, Albon is now all in.

"I'm not a very extroverted person. I'm quite shy and public things aren't my favourite things to be doing. But I do feel that there's an element of responsibility to be able to do good," he explained.

"And there's a lot of good examples. Just looking across to my colleagues, people like Lewis or Sebastian, they do amazing things for people outside of the sport.

"When the kids asked to dye my hair, the first thing was okay, I'm definitely going into Melbourne with bright reds. But it was a great way to put focus on the actual charity and the donation side.

"I do feel very much Thai and I want to do more and more projects that can give opportunities to people, to children, to whoever it may be in Thailand.

"Obviously, I feel like I'm in a great position to try and help. It's an opportunity for me to do the right thing. We've been able to donate quite a lot of money and we're not stopping, we want to keep going."

Albon's team boss said he was proud to see his driver use his status to make a difference and hopes more drivers will follow suit.

"I think it's important and they should do that," Capito added. "The impact it has on the kids to have somebody like this associated with them is massive."

"It's not just the money coming in, it's the feeling that somebody is on their side."