Not many Formula 1 technical gurus have the opportunity to re-engineer a car 20 years after they designed it. But that is the challenge now facing Mike Gascoyne, as Adam Cooper explains.

As such, he will be responsible for updating a car that is based on the 1998 Tyrrell 026 that he originally conceived, under the stewardship of the late Harvey Postlethwaite.

Although he had nothing to do with the original two-seater conversion, it’s still a neat piece of symmetry for former Jordan, Renault and Toyota man Gascoyne, who was back in the F1 paddock at the British Grand Prix for the first time since he left Caterham early in the 2012 season.

First seen at Barcelona in May, the two-seater project is one of the first major signs of Liberty’s attempts to spice up Grand Prix weekends. A pair of cars are running a limited programme this year, prior to a full season of 21 races in 2018.

And while there will be the usual quota of local dignitaries and showbiz personalities in the back seat, there will also be opportunities for fans to get a run – either through competitions and prize draws, or if they have enough money, by paying through the F1 Experiences organisation. 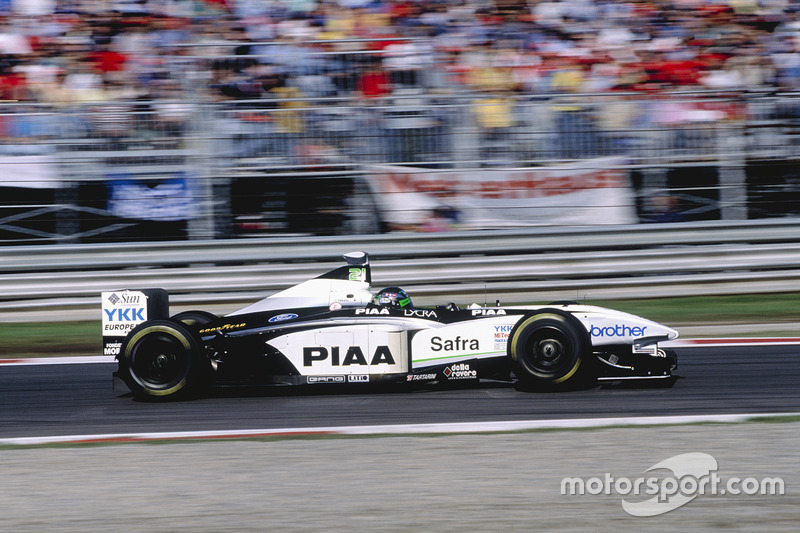 Although usually referred to as the “Minardi” two-seater – because the cars ran in the Faenza team’s colours before Stoddart sold out to Red Bull – at its heart the design is still a 1998 Tyrrell, as raced by Tora Takagi and Ricardo Rosset in the team’s last season.

“Paul bought all the Tyrrell assets when it folded,” says Gascoyne, who now runs his own design consultancy. “I wasn’t involved it in being stretched, as I was busy at Jordan and then Renault.

"A couple of guys who were at Tyrrell at the end stayed on and did the chassis mods. They recessed the seat back bulkhead, stretched it to get to the passenger in, and so on.

"Paul built eight cars – they were not cut up or elongated, they were all made new. They’ve never been retired. One was written off, and there are seven still in existence, of which Paul has five, as two others were sold to Abu Dhabi.

"Paul bought the rights to the Cosworth V10 engine, and all the bits for that, so he’s been able to maintain these cars very professionally.”

Gascoyne and Stoddart have long been mates, and when the latter decided that it was time to update the technology for 2018, he knew who to call.

“I actually raced with him in the BOSS series in his Tyrrell 022,” says Gascoyne. “And I drove one of the two-seaters at Donington and took some passengers round for him, which was great fun!

"He got in touch with me and asked me to look over the technical side of the programme, which is ideal. The fact that I designed the original car, the fact that I’ve driven it, makes it a very complete story.

“Basically over the last couple of years the programme has run down, and this year was due to be the last. Then obviously the contact with the new owners of F1 happened.

"They were looking for a two-seater programme, and if you want to run one efficiently and cost-effectively, there’s no better way to do it than this.” 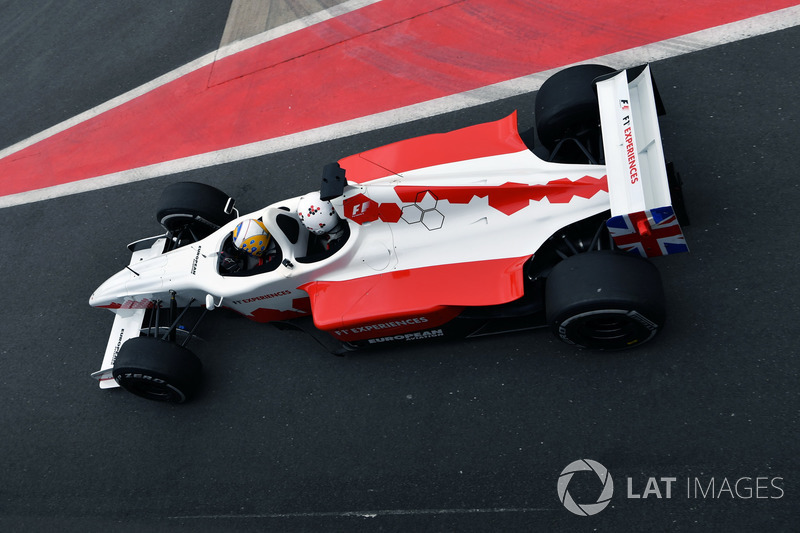 F1 technology has move on since Stoddart’s two-seaters were first built, so an upgrade is needed for 2018. The main focus will be on aesthetics, although it will go a bit further.

“Paul obviously wants to update these cars to give them a more modern look, and there are some things that we’ve got to do from a reliability point of view," adds Gascoyne.

"We’re certainly going to put a modern aero package on it, so a new front wing, bargeboards, and rear wing to reflect the current regulations.

“We’re going to make two new chassis, because we want to incorporate changes to improve driver fit, and get bigger passengers in, and make them more comfortable and safer.

"We’ll also put new electronics on, because they are probably the weak link from a reliability point of view – they are just not made any more.

"Also we can put dash displays in for the passengers, so they will be able to see where they are on the circuit.” 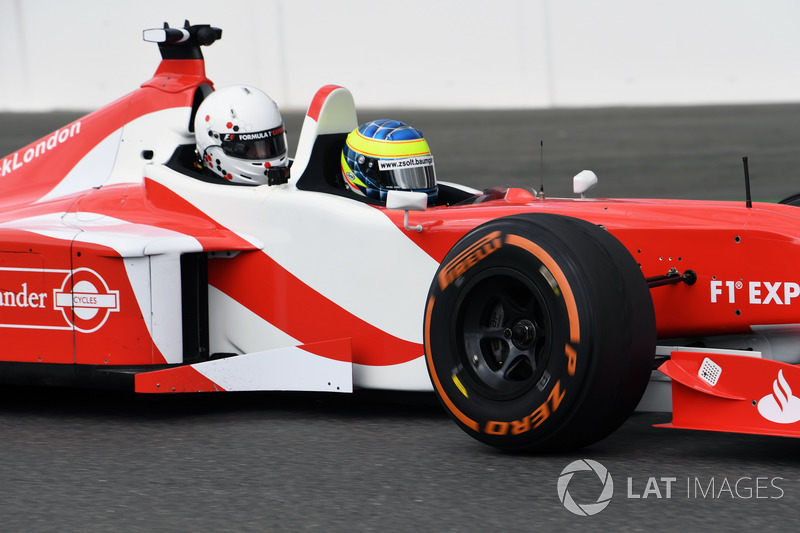 One of the downsides of the two-seater is that the passenger faces the back of the driver’s roll hoop, so vision is restricted. Gascoyne intends to address that.

“We can improve the view for the passenger – we can make that seat bulkhead quite a bit smaller," Gascoyne explains. "The reason these cars have run so reliably is actually that they are very over-engineered from a safety point of view. Without compromising on safety, we can improve it in lots of areas.

“Also, these chassis were done before you had huge composite stress analysis capability and all that sort of thing. They were kind of done with hand calcs!

"We’re now able to retrospectively do all of that work. We don’t need to take weight out of it or anything, what we’re looking at doing is improving the experience for the passenger, what he can see, what displays are available to him, comfort.

“For the passengers you don’t need to do more than two or three laps before it’s quite uncomfortable! We’ll improve all of that for the passenger, and also get modern cameras in there, so you’ve got a record.” 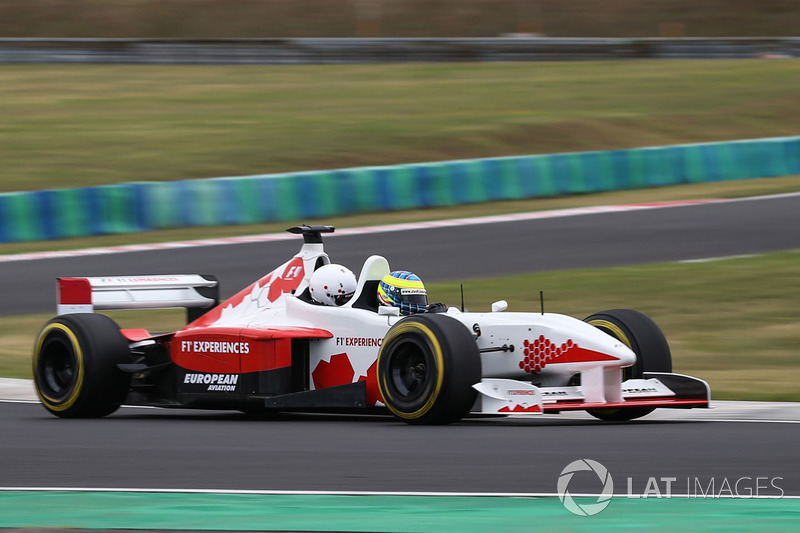 Reliability is key as well. The two-seater programme uses finely tuned slots on the weekend schedule – creating space is one reason why support race practice sessions are moving to Thursdays – and thus the cars have to run like clockwork.

“It’s not a technical challenge in terms of producing a competitive car, but you do have to produce a safe racing car that’s going to run for four days at every Grand Prix.

"It has to be safe and reliable, and it has to work every time. If you have a five minute slot to put two VIPs in it, it doesn’t look very good if the engine doesn’t start, or if it breaks down!”

The looks of the car may change, but underneath it will still be a 1998 Tyrrell.

“We won’t change all the running gear – if you change radiators or something the knock on effect of all those parts is massive, so there’s a lot you don’t want to change," Gascoyne adds.

"If you want to run these things cost-effectively, if you go to the complex engines they’ve got now, just running the hydraulic systems is biblical, and the cost of the programme wouldn’t sustain that. As a cost-effective solution, it’s a fantastic one.” 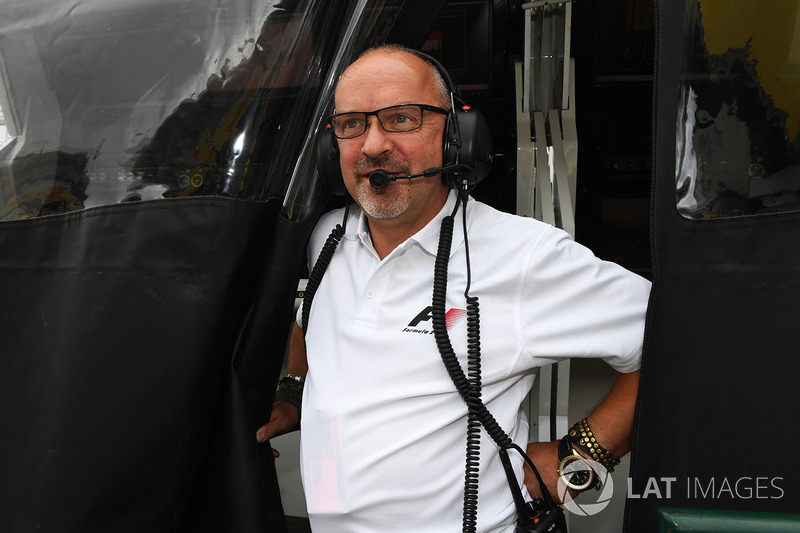 Stoddart see the programme as F1’s “11th team,” and the overall look of the ex-Manor garages, trailers and motorhome is very much in keeping with that aim. Gascoyne wants the operational side to run efficiently too.

“A lot of it is ensuring that we operate like a professional F1 team, and that’s really my job, just to improve our operational procedures," he says. "We’ve instigated all the normal briefings and debriefings, making sure that everyone on board knows what we’re doing, and how we’re doing it.

“We’re not going racing or qualifying, but we’ve still got to cope with half a dozen passengers turning up 20 minutes before they are due to get in and not knowing what to do, and yet we have to keep all our timings correct, and operate professionally.”

And there’s a sound reason why the two-seater team has to do that – it is a flagship for the F1 brand, and running in front of huge race weekend crowds.

“As I said to the whole team, we’ve got the F1 logo on our shirts and on the cars, and that’s what everyone’s looking at," concludes Gascoyne.

"At Silverstone the cars were out an hour before the start of the race in front of 120,000 people with two VIPs in them, and you’re representing F1, the press is looking at you, the crowd is looking at you, it’s got to go right. That’s important, and it has its pressure.”

F1 surges into gaming with launch of 2017 eSports World Championship