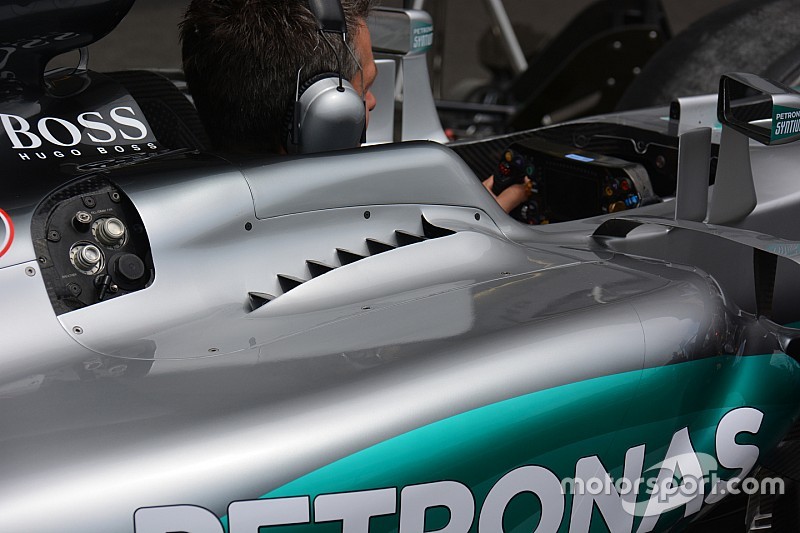 Giorgio Piola and Matt Somerfield look at how Formula 1 teams addressed the need for cooling in the scorching heat of the European Grand Prix.

The Baku street circuit posed many questions of the engineers ahead of the event, especially in terms of cooling, with a tricky middle sector sandwiched between two high-speed sectors.

Mercedes, just as many of the teams did, used maximum cooling to reject heat generated by the powerunit. The louvres used to displace heat from the sidepods were opened up alongside the cockpit (above).

Although both drivers thrived during Friday’s free practice sessions, Lewis Hamilton suffered when changes were made to both W07’s on Saturday to protect the cars for the race.

Marginal on temperatures, the team had decided that, to protect both the tyres and brakes during the race, it would need to make changes overnight, which suited Nico Rosberg more than Hamilton. 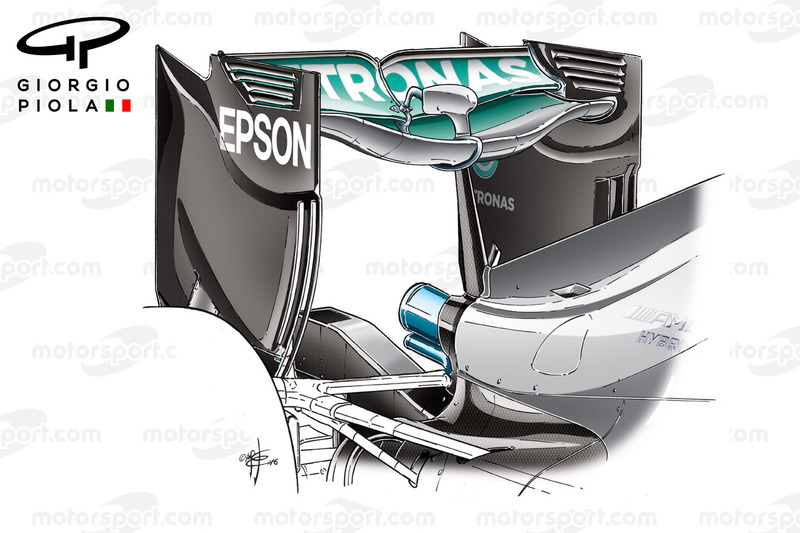 The W07 featured a new rear wing in Azerbaijan with a distinctive spoon shape, much like the design used at Spa and Monza last season.

We have already been gifted the first viewing of what the team would use, when Rosberg had the wing mounted on his car during FP1 in Canada.

For Azerbaijan though, the freshly applied hooped monkey seat was removed entirely, as Mercedes sought the maximum drag reduction available, primarily for the 2.2km straight.

The spoon design has been used by several teams down the years and in various guises, as it offers a similar surface area for downforce generation as a conventional wing but reduces drag, owing to the smaller chord lengths at the flap's outer sections, which change the airflows interaction at the flap and endplate juncture.

The design used by Mercedes last year was ultimately compromised by a mistake in the regulations that has been rectified for 2016.

The lower, central portion of the mainplane defies the intention of the regulations, which only permit the wing elements to reside in a box 600mm above the reference plane.

However, an exclusion zone lies 100mm from the car's centreline to permit the placement of the exhaust, wastegate exhausts, monkey seat and other such appendages.

As such, the central part of the wing can dip below the intended restriction, as long as it extrudes upwards at a point 100mm from the centreline to meet the restriction.

In 2014/15, wording carried over from the previous regulations only allowed the central portion to dip below the restriction within 75mm from the car's centreline, giving Mercedes 50mm more to play with in terms of geometry this year.

It was hoped that a resurgence from Ferrari in Canada would continue to propel the team toward the Mercedes in Azerbaijan.

However, its Achilles' heel for much of the season, maximising tyre performance seemed to bite them hard again, with their pace relative to the championship leaders somewhat adrift most of the weekend.

The unique characteristics of the Baku track, with its tight and twisty middle sector, are polarised by the unusually high-speed sections for a street circuit, which made it a difficult call in terms of aerodynamic setup.

Most teams opted for a low-downforce configuration in a quest for top speed along the circuits 2.2km straight but that clearly compromised the drivers' approach around the rest of the lap. 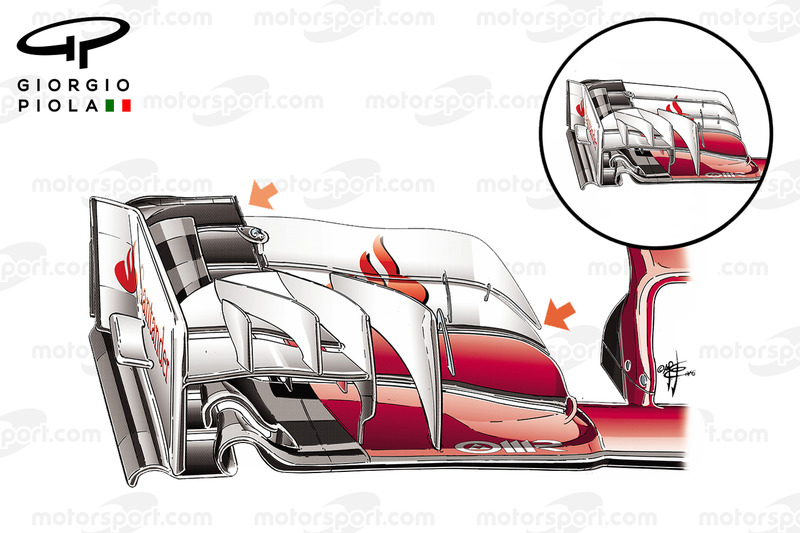 Having made changes to the SF16-H’s front wing in Canada, with an eye on shifting the aero balance, Ferrari trialed further amendments that ultimately weren't used in Azerbaijan.

Although overall the flaps were shorter (top arrow), the chord height of the new flaps was increased when compared with their predecessors, whilst the reduction in flap quantity changed the tip frequency and geometry that helps to shape the Y250 vortex (lower arrow).

All of these changes were keyed at changing the shape of the airflow as it moves down the car, reducing downforce and drag. 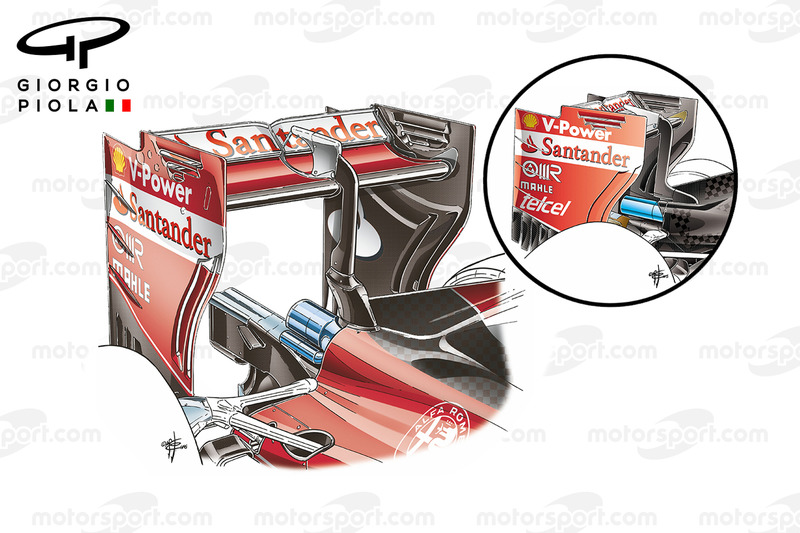 A new rear wing also adorned the SF16-H in an effort to reduce drag on the long straights that are a feature of the Baku street circuit.

The wing is much like the design employed in Monza in 2015 (inset) with a much shallower angle of incidence accompanied by only three endplate louvres to change the airflow's vorticity as the pressure gradients collide.

Owing to the shallower flap angle, the slots that usually reside in the endplate below them were completely removed too.

The low drag philosophy of Williams paired to the Mercedes powerunit really should have culminated in a much better result for the team but, like for many of its rivals, it appears its struggles centered around the thermal operation of the tyre.

However, the team should be lauded for its pitstops this season, having recorded the fastest stop at every round so far and dipping below two seconds for the first time in Azerbaijan. 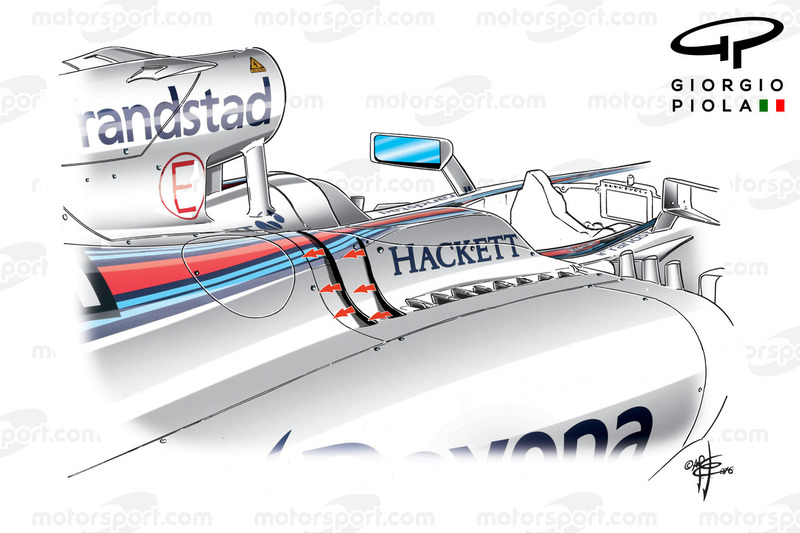 Like Monaco (above) the maximum cooling option alongside the cockpit and enlarged cooling outlet at the rear of the car was used to reject heat created by the powerunit in the twisty middle sector. 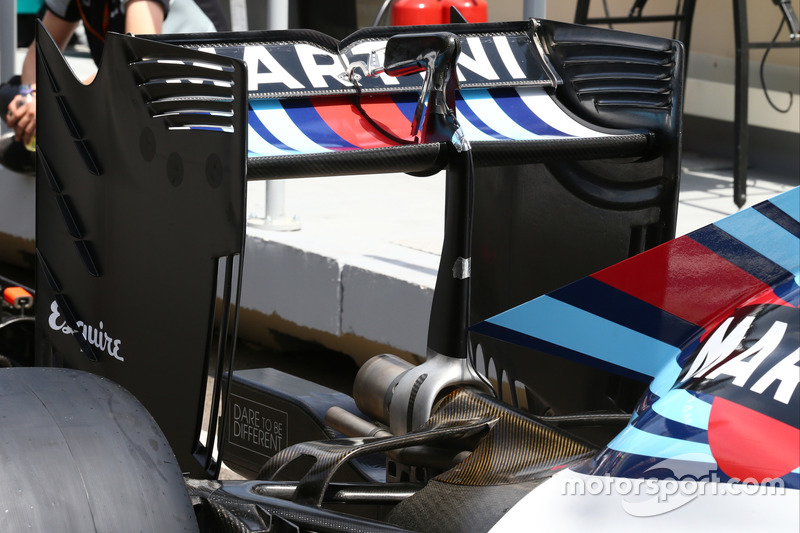 At the rear of the car the team employed a new rear wing, with reshaped endplate louvres to accommodate the much shallower angle of incidence as it looked to maximise downforce for sector 2 and reduce drag for sectors 1 and 3.

McLaren’s recent refinement of an all-new front wing concept abated in Azerbaijan as the team looked to concentrate on other areas of the car. 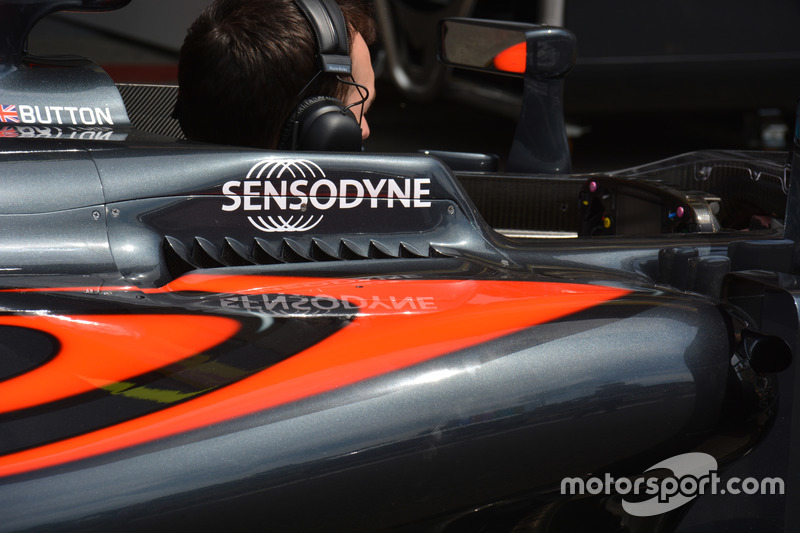 Cooling was one such area of scrutiny with the cooling outlet alongside the cockpit revised, allowing more heat to be rejected to help improve the powerunits performance. 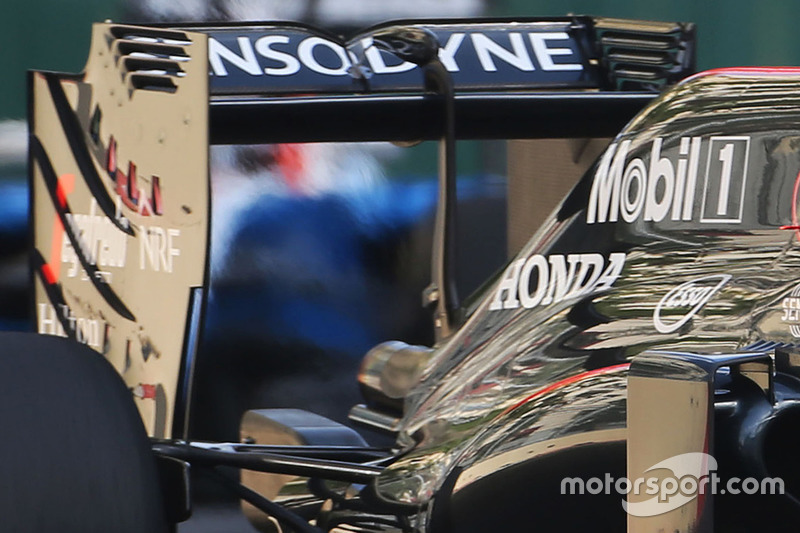 To reduce the impact of drag on the MP4-31 and marginalise its powerunit deficiencies along the 2.2km straight, changes were made to the rear wing, with the mainplane and upper flaps angle reduced.

Meanwhile, the louvres placed in the upper corner of the endplate, which help to change the tip vortex, were reduced from five to four. 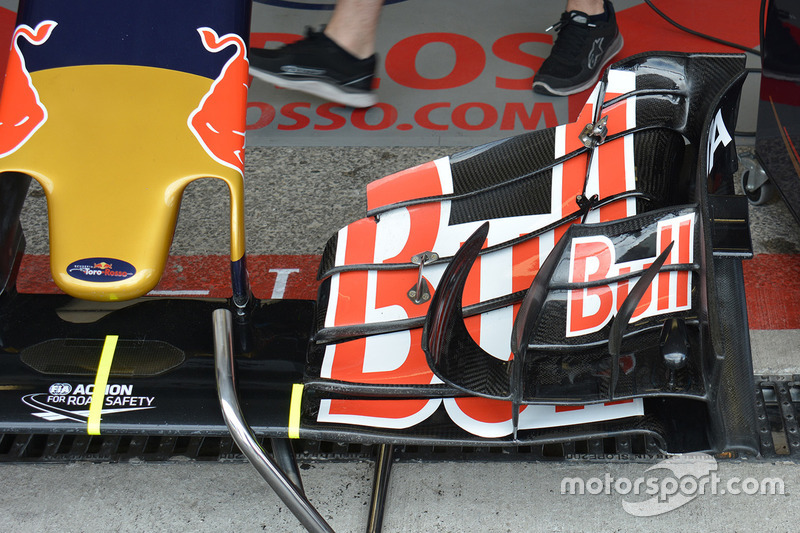 The Italian outfit took a fairly old-school approach in Baku as it tried to play around with the aerodynamic balance of the car.

Both drivers utilised a front wing where the flap had been cut down on site, changing the shape of the airflow shed by the wing, as the team looked to reduce drag and re-balance the car. 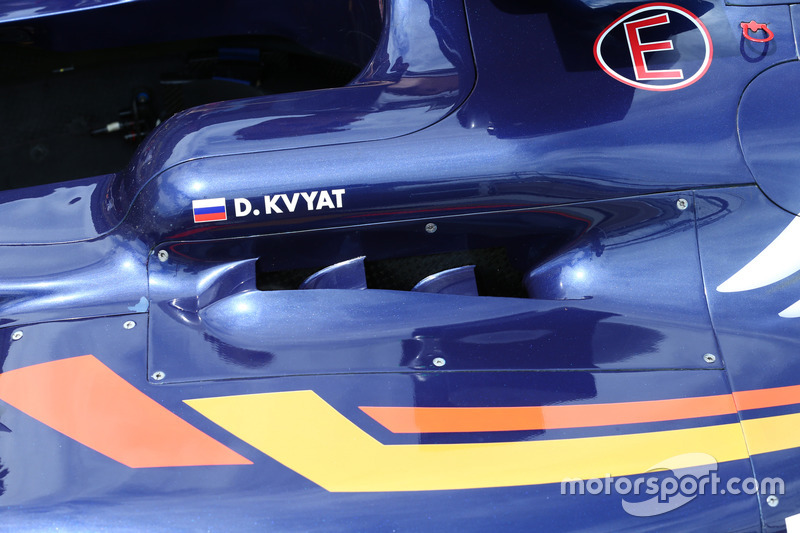 Whilst other teams opened up their cooling around the streets of Baku, Toro Rosso opted to go a different route, whilst continuing its trend of using asymmetric layouts.

On the left side of the car (above) it ran with an opening alongside the cockpit to reject heat generated by the powerunit and ancillaries, whilst on the right it remained completely closed.

Lewis Hamilton: "I need to get back on it in F1 qualifying"