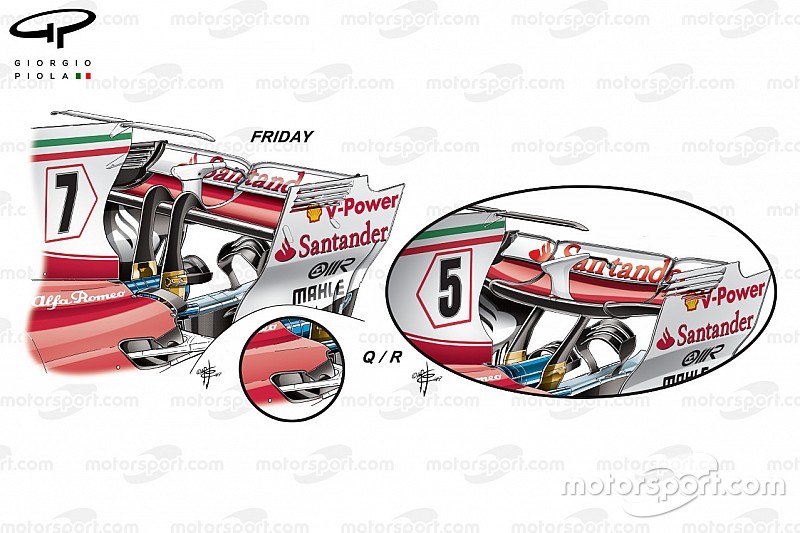 Formula 1's leading teams Mercedes, Ferrari and Red Bull all brought wing updates to the Azerbaijan GP, looking for a trade-off between drag and downforce at the atypical venue.

The Baku street circuit provides a significant challenge to both drivers and engineers in that the narrow barrier-lined sections are paired with the longest straight on the calendar.

This 2.2km straight cannot be overlooked when setting up the car, as having too much wing would just be performance thrown away.

As such, all of the teams had reconfigured front and rear wings available, as they looked to balance their top speed requirements with low-speed needs. 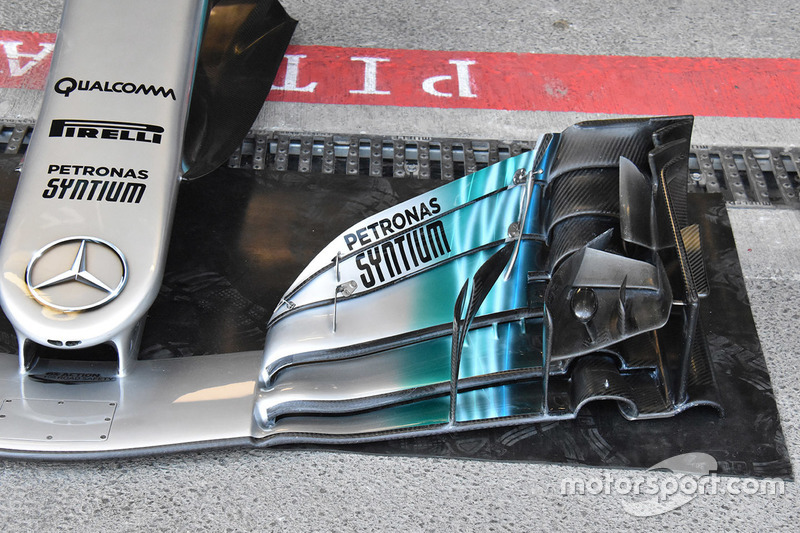 In light of these circuit-specific requirements, the Silver Arrows made a minor adjustment to the front wing, as the upper flap was trimmed down in order to reduce load on the front axle - balancing the changes made at the rear of the car. 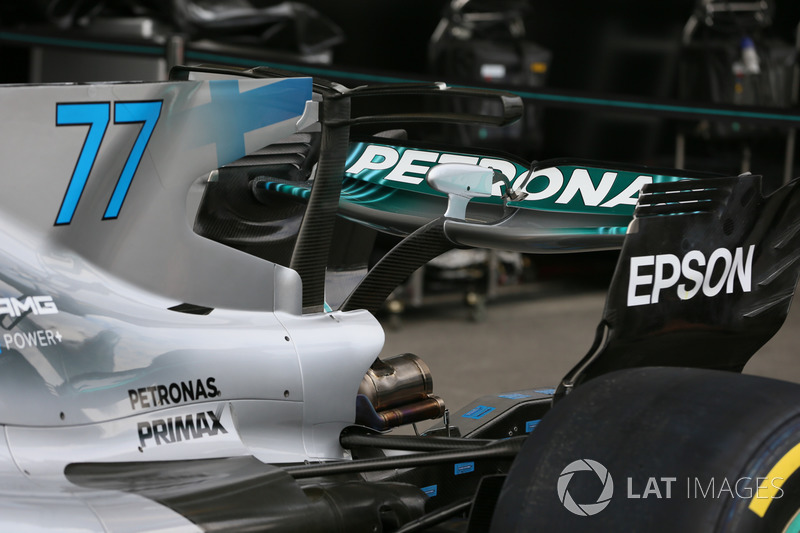 Mercedes has been utilising a ‘spoon’-shaped rear wing for the majority of 2017, the exceptions being Barcelona and Monaco, where the team opted for a conventional shape for peak downforce.

However, in Azerbaijan the team considered toning down the curvaceous styling a little as it tested a new wing, featuring a new mainplane, top flap and endplate louvres in order to reduce the downforce and drag being generated.

The general idea of the spoon-shaped wing is that the centermost portion of the wing still offers a decent serving of downforce, while the more slender outsection, where the drag-inducing tip vortices are generated, creates less downforce and less drag.

Allied to this the reduction in clearance and reshaping of the tip vortices, the endplate louvres, of which Mercedes prefers the open-ended style ones, were reduced from five to three. 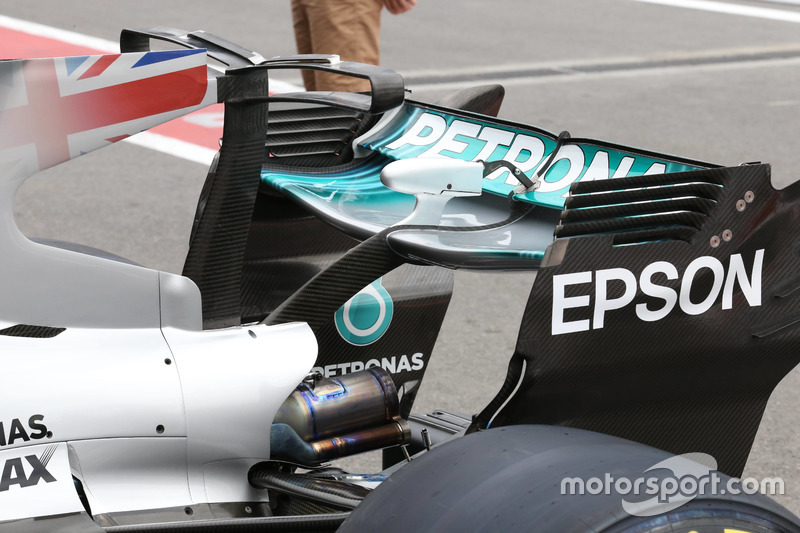 Although Mercedes had spent time analyzing this lower-downforce rear wing, the team opted to run the standard configuration for the race in the end, improving downforce at the cost of drag along the main straight. 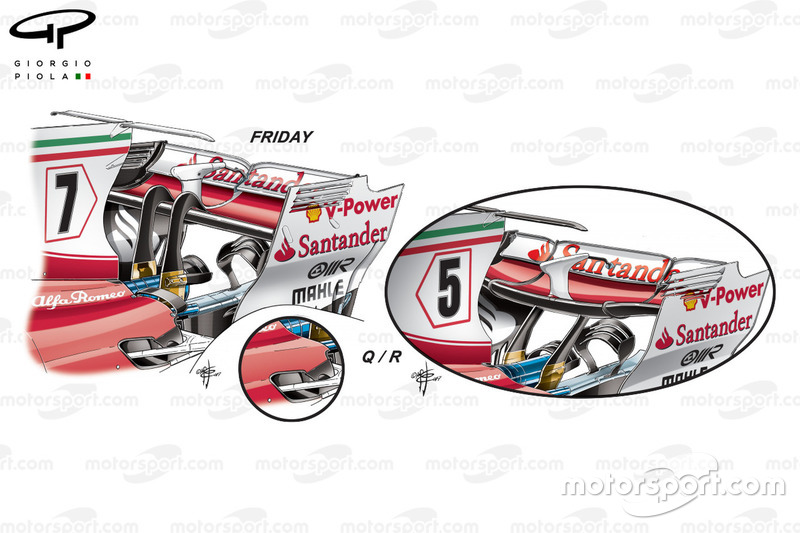 Ferrari trialled both versions of its rear wing during free practice, eventually opting for the lower-downforce spoon-shaped wing for qualifying and the race. However, rather than trim its front wing, Ferrari simply opted to reduce the flap's angle of attack, giving its drivers the right overall balance.

Cooling is also of paramount importance at Baku, with the power unit given a significant workout, in most cases requiring the maximum solution to evacuate the heat. Of course this has an impact on the amount of drag being created but it's a penalty worth taking in the performance trade-off.

Ferrari opted to run its maximum-cooling outlet at the rear of the car to help with this but also supplemented it with a pair of mini-flaps on the trailing edge (standard configuration in the small inset for comparison).

The mini-flaps are sited in the area that make T-wings possible and are used to improve the efficiency of the sidepods, be it internal or external flow, in much the same way a gurney flap might. 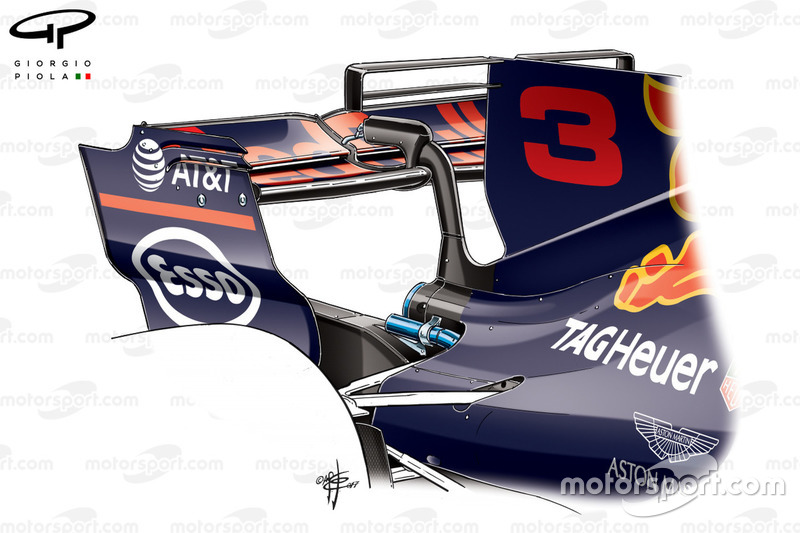 The deficit that Red Bull suffers from in terms of its power unit is well-documented and has often led to the team opting for a lower-downforce/drag configuration in order to marginalize it.

In Baku, the Austrian team outfitted the RB13 with a rear wing that catered for this, in what many were describing as a Monza level of downforce. 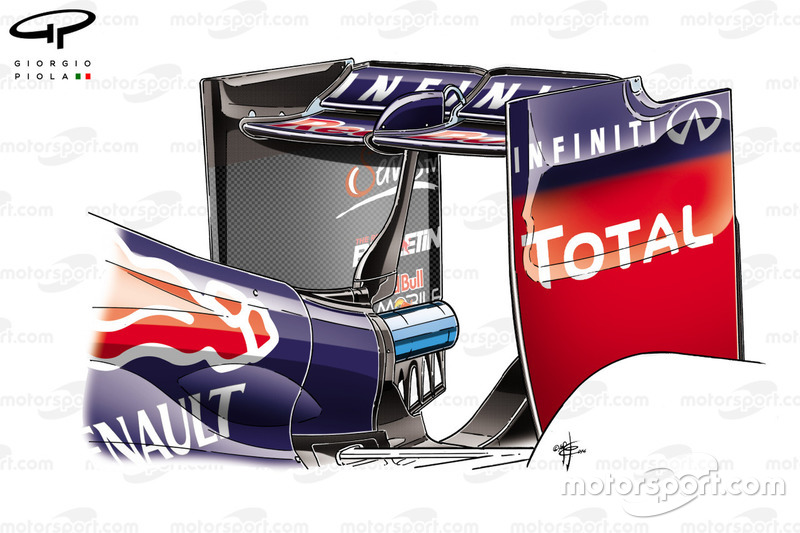 The wing, albeit much less aggressive, is not at the level we'd ordinarily expect Red Bull to produce for Monza (RB10, above), as the team would run with an exceptionally low angle of attack while the endplates would be devoid of louvres.

Even so, it is particularly low-drag and helped both drivers to achieve exceptional figures in the speed traps when compared with its closest rivals.