Giorgio Piola and Matt Somerfield look at the main tech topics in F1's midfield in the Japanese GP, including Haas' front wing success and the reason behind McLaren's miserable weekend.

McLaren and Honda have made huge strides this season but they'll have known ahead of time that the Japanese GP, the engine manufacturer's home race, was going to be a difficult weekend for the team.

The MP4-31 is conceptually very similar to the current and previous Red Bull cars, such is Peter Prodromou's influence on the aerodynamic direction it is taking.

This is by no means a bad thing, with the RB12 still identified as one of the strongest chassis' in the field.

However, Suzuka's marriage of mid-high speed corners and heavy braking zones did not bode well for the way in which the RA616H makes and uses its power, putting their aero philosophy out of kilter too.

Jenson Button even made reference to it in an interview: "We're very strong with heavy braking corners and low-speed corners, but not in the corners when you're not braking heavily. Floor not close to the ground, it doesn't work as well."

The McLaren driver clearly alluded to the steep rake angle that the MP4-31 is run at and the way in which the car makes downforce from the front wing to the elevated diffuser.

Characteristically then, the circuit just didn't suit the team, but whilst the result will be difficult to swallow, it didn't stop it looking forward. 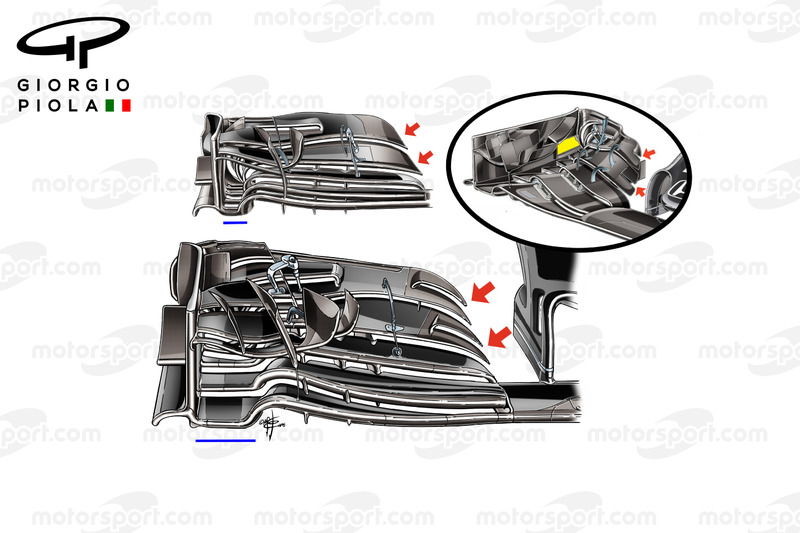 McLaren has consistently altered its front wing throughout the season as it's gone in search of extra performance, and whilst this iteration of the wing has been in play since Singapore, its complexity is worth our focus nonetheless.

One of the main areas of focus has been the flap tips, which now have slots placed halfway up their surface to double up the number of tips that can influence the air (arrows).

Each tip will shed a vortex, which is being used to control the shape of the main Y250 vortex that is created from the mainplane below. Initially these slots were just applied to the blunt edges of the flap, (see above) and then the changes were made in the inset. However, more recently this concept has evolved, with the slots following the a revised curvature of the flap.

You'll also note how the footplate inside the endplate has been increased in width (depicted by the blue line), changing the way in which airflow moves under the mainplane through the arc and then spills out around the front tyre.

You'll note that unlike the rest of the grid, who seem to instantly direct their arched or tunnel section outward, the new McLaren concept sees them direct the first few flaps of the arched section inward, before it funnels outward.

Seeing as most teams now seem to have at least one hand on their 2017 design philosophies, it makes you wonder if this is McLaren looking to get ahead of that curve and understand a concept it would like to carry over whilst also taking advantage of any performance benefits it can bring them this season.

Haas surprised many of the midfield runners in qualifying, not least the Williams duo of Valtteri Bottas and Felipe Massa, who it bested to make the top 10 shootout in qualifying.

Japan signalled the first time that Haas has used its updated front wing in anger though, having struggled with set-up in the last few GP's and leaving it with little time to assess the new wing.

First seen in Singapore, the new wing is an evolution of the concept used by the team since the start of the season and features several new elements that we've seen other teams use.

Although evaluation of the parts was curtailed in Singapore and other issues put its use on the back burner for Malaysia, the team quickly realised that the wing wasn't performing as intended and strengthened it ahead of FP3 and qualifying in Japan. 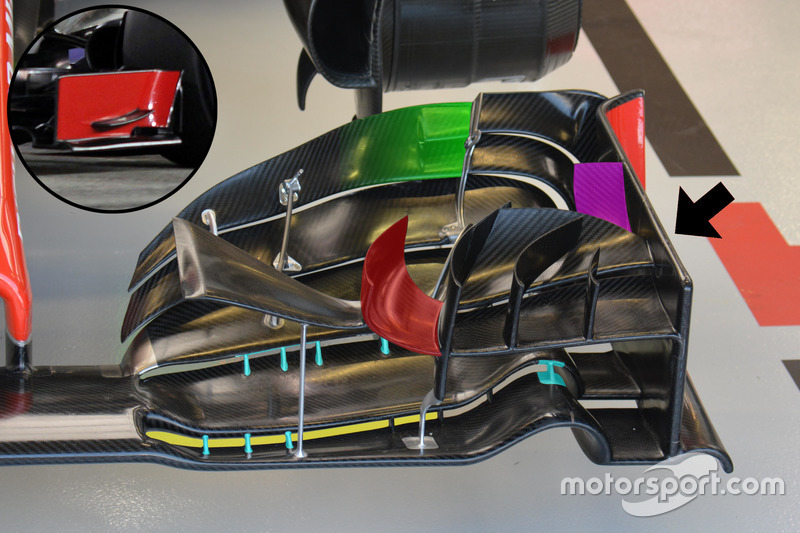 The new wing features a full length slot in the mainplane (highlighted in yellow) whilst vertical dividers are placed between the flaps to prevent the gap from reducing under load, which may cause airflow instability.

These dividers also deter marbles from collecting in the gaps for much the same reason (highlighted in light blue).

The 'r' cascade has been replaced by a 'c' cascade (highlighted in red) that mounts to the side of the main cascade, rather than to the mainplane to tidy up flow with its predecessor simply in the flap's way.

Upwash canards have been added on either side of the endplate (highlighted in purple and arrowed/inset) to assist the other devices on the wing to move airflow outboard of the front tyre, improving efficiency.

Lastly, the upper flap's adjuster has been moved inboard which has allowed the team to introduce a slot in the uppermost flap (highlighted in green).

Over the last few races, we've seen Sauber adopt numerous new parts, and whilst there is nothing revolutionary it's at least good to see that the team is improving with known concepts.

In Japan, the team had several more parts to try, building on the improved performance it has already seen. 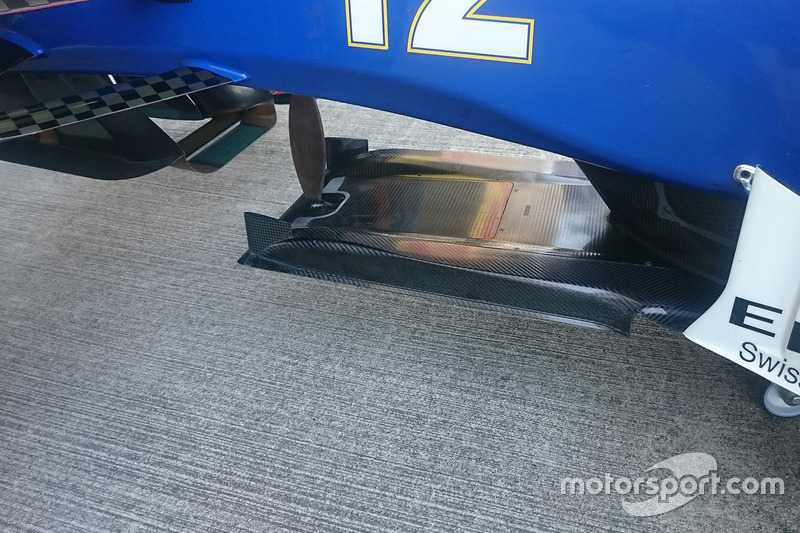 The revised splitter, much like the trend that has appeared amongst the other teams already, features vertical fins on the outer leading edge. These fins are used to frame and control the oncoming airflow, improving how it operates downstream. 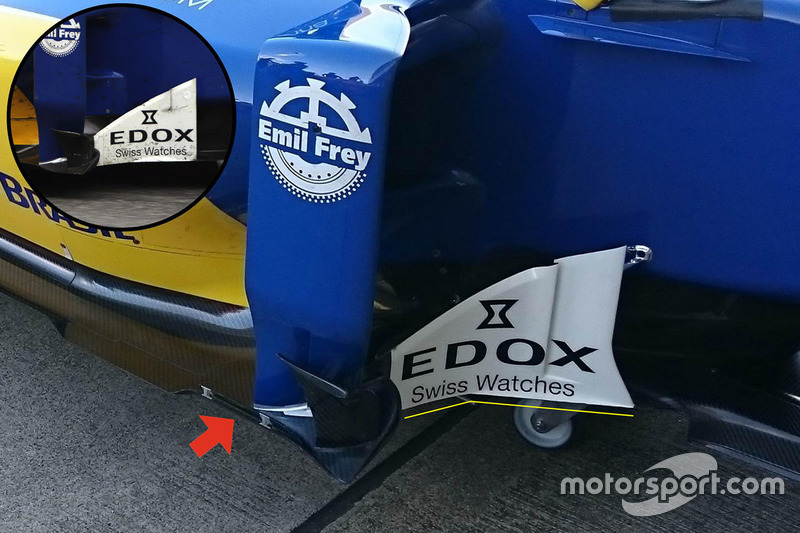 The bargeboards have been completely overhauled, with the leading edge shape completely changed to feature a steep incline at the base before reverting to a straight vertical edge.

Furthermore, the slot which previously only intersected with the surface a few centimeters has been significantly increased in height and set back a little further from the leading edge than before.

These changes are focused on overcoming the steeper angle that the bargeboards surface is designed with (highlighted in yellow), as the team looks to maximise the performance of that area of the car.

It has also followed another trend, adding a detached floor scroll to the periphery of the C35's floor (arrowed). 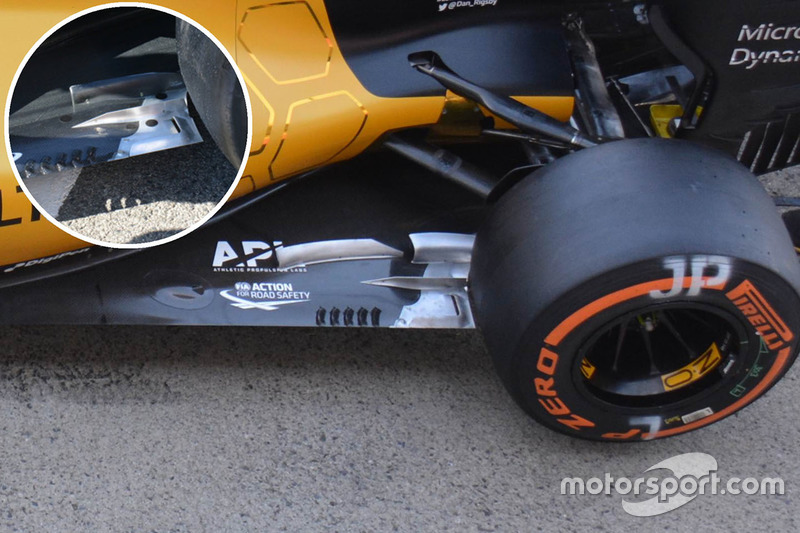 Renault, like many of the teams, has insisted that its development focus is already firmly fixed on 2017, however, there are still parts in the pipeline and the Japanese GP provided the backdrop for the use of one of them.

In search of more rear downforce and improved balance, the team revised the area ahead of the rear tyre on the RS16's floor.

The inner of the two vertical strakes has been discarded and replaced by two strakes instead, with the more forward of the two reaching much further up the car's floor and arching around to collect the airflow that's moving around the sidepod's curvature.

The trailing upper edge of this leading strake also declines more steeply, imparting a particular airflow structure that should assist the taller 'r' shaped strake that lies in behind.

These strakes, along with the various other slots and strakes placed in or on the floor ahead of the rear tyre are used to control 'tyre squirt', this is a phenomenon caused by the rotation and deformation of the rear tyre, which squirts airflow latterly into the diffuser when the tyre is under load.

The strakes and slots condition the airflow around the tyre in such a way that it should limit how much airflow is squirted into the diffuser's path, increasing peak performance and improving balance in transient conditions.

Red Bull surprised by how Ferrari gave up Japan podium