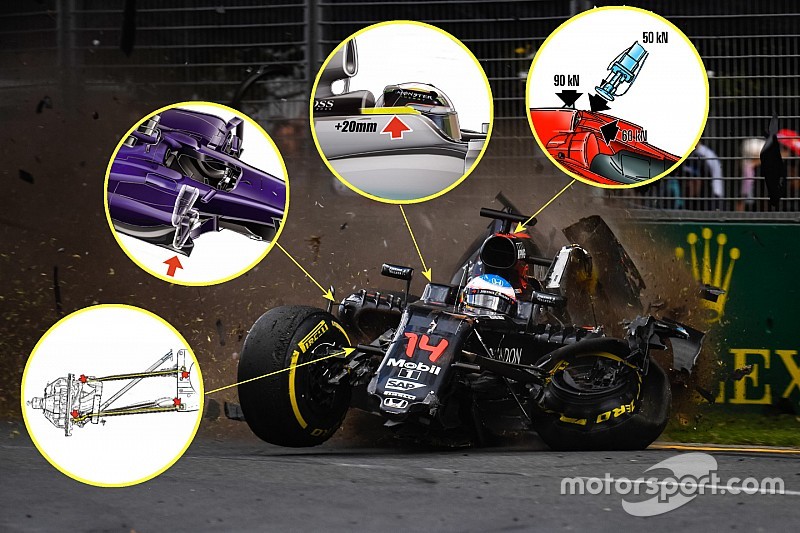 Fernando Alonso walking away from his accident at the Australian Grand Prix was a testament to the safety measures of modern Formula 1. Matt Somerfield and Giorgio Piola look at how F1 protects its drivers.

Formula 1's omnipresent pursuit of safety usually remains under the radar and it is only on occasions like we witnessed in Melbourne that it is brought into sharp focus just how far F1 has come in the field of protecting its drivers.

A huge amount of research and development goes into understanding how to dissipate the energy created when bodies collide. 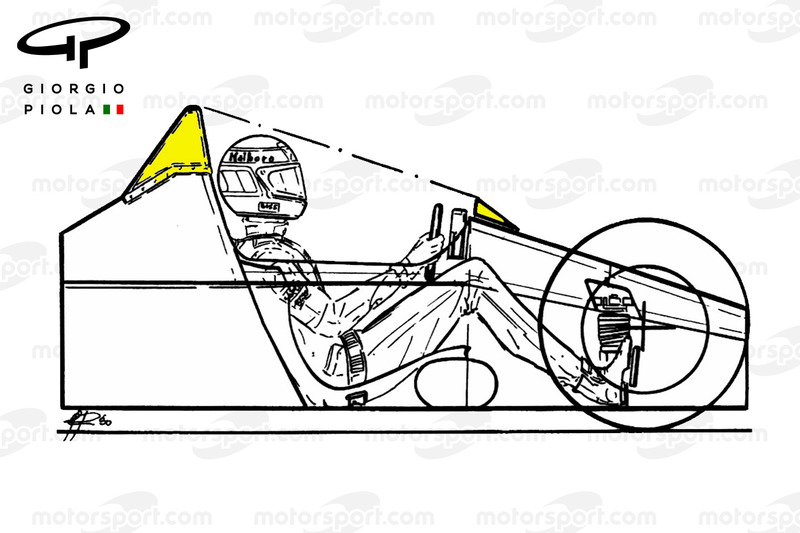 Crashes like the one that befell Alonso on lap 17 may look spectacular but arguably even more fascinating are the various structures and mechanisms that played their part in making sure he could escape unharmed.

Rather than being as rigid and incompressible as possible, as was the case a couple of decades ago, structures of the car are now placed with the express intent of them decelerating a foreign body, absorbing the kinetic energy as the structure is crushed.

In order so that accidents can be controlled in a similar fashion, the FIA regulates the dimensions of many of the areas of the car, whilst several key structures must also undergo stringent load and crash tests. 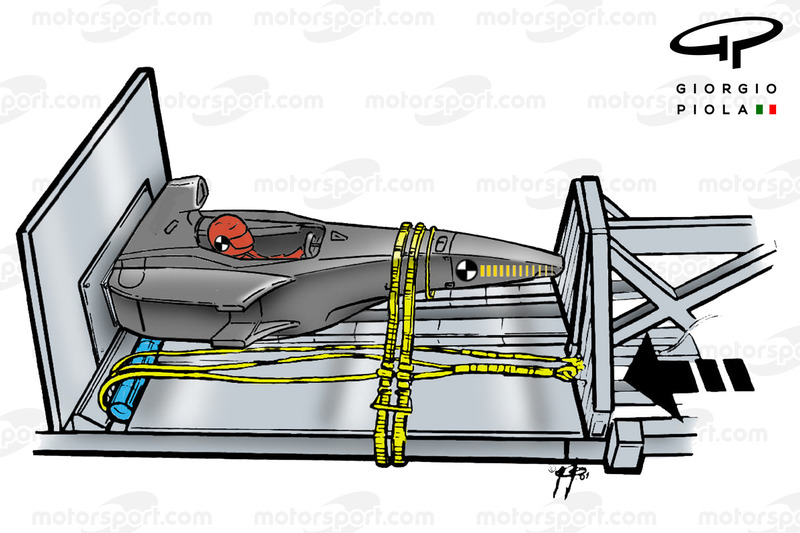 The nosecone undergoes the most tests, not because it is more important but because it is also in a prime aerodynamic position, forcing teams to chase ever-demanding geometric shapes to save weight and improve aero whilst still passing the crash tests.

In order to maximise the global performance of the car within the current regulations, the teams are currently pursuing avenues which allow for the shortest nose possible, placing even more demand on them, as this means decelerating the car over a shorter distance. 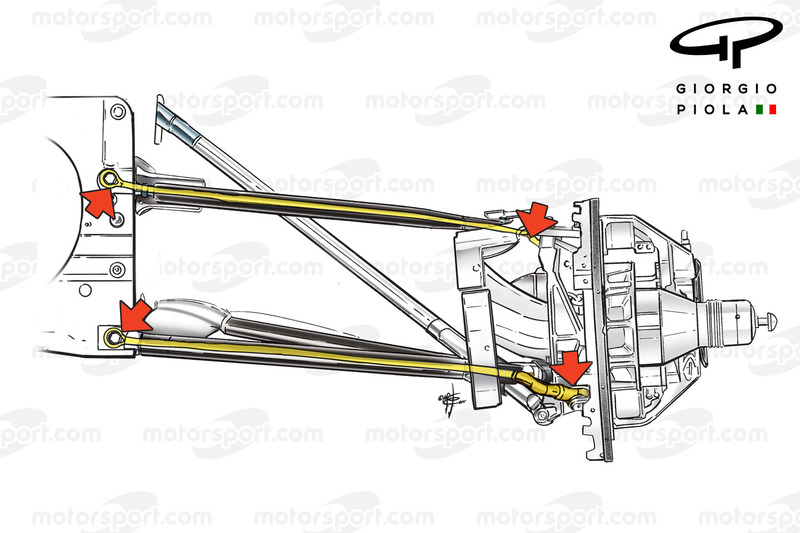 Wheel tethers have been used by F1 teams since 2001, in an effort to reduce the chances of a wheel coming loose during an accident and impacting with the driver's head or threatening spectators and officials.

Following the tragic accident involving Henry Surtees, who was killed in a Formula 2 race when a competitor's wheel became detached and struck him on the head, the FIA updated the wheel tether requirement.

In 2011, the FIA revised the frequency of the tethers, as each wheel is now fitted with not one, but two tethers, each of which must have a minimum energy absorption of 6kJ.

During an accident, a wheel may be ejected at velocities in excess of 150km/h relative to the car, which corresponds to a linear kinetic energy of 17kJ for a 20kg wheel assembly, making it essential this energy be controlled.

The 2017 regulations will see further amendments, taking into account the change in the cars' width, increasing the minimum absorption to 8kJ. 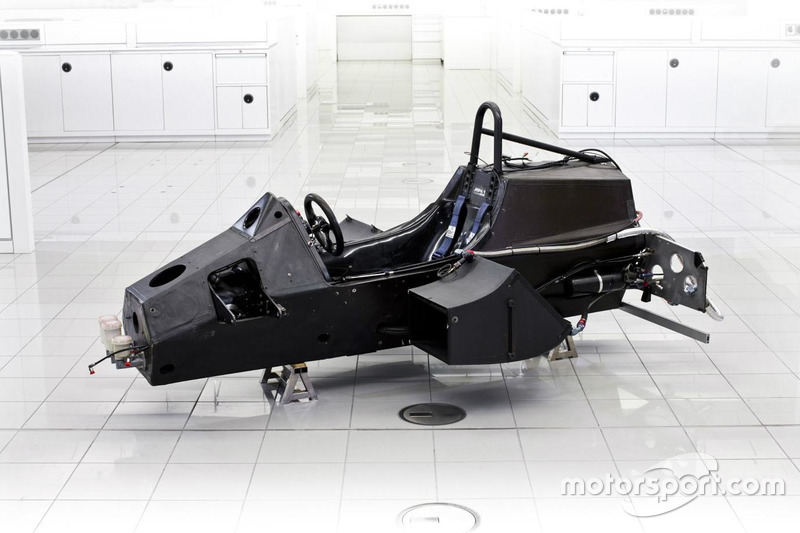 At the heart of the car is the monocoque, made up predominantly of carbon fibre. First introduced by McLaren in partnership with Hercules in 1981, it subsequently went on to revolutionise the sport.

At first, there was scepticism from within the sport that the material and design were not up to the task but, before long, all of the teams were planning their own and out went the metal structures that had been used before.

The composite material is both lighter and stronger than anything that went before and it has since allowed teams to build complex structures that would otherwise be impossible with conventional methods and materials. 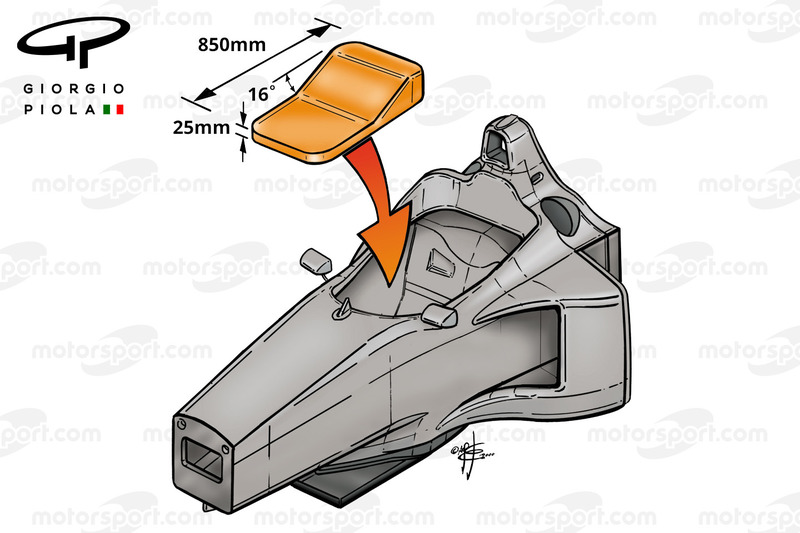 The 'survival cell' has minimum external dimensions to ensure that the drivers are adequately protected, whilst the cockpit opening is heavily regulated, ensuring that all of the teams' designs are the same, acting as a further control measure in the event of an accident and allowing swift departure by the driver from the car.

Since 1988, the drivers' feet have been required to be behind the front wheel centreline, following several accidents that had resulted in broken legs in the preceding seasons.

This resulted in a dramatic change in the driving position, with drivers' feet raised, which is in sharp contrast to the ordinary seated position they'd be used to. 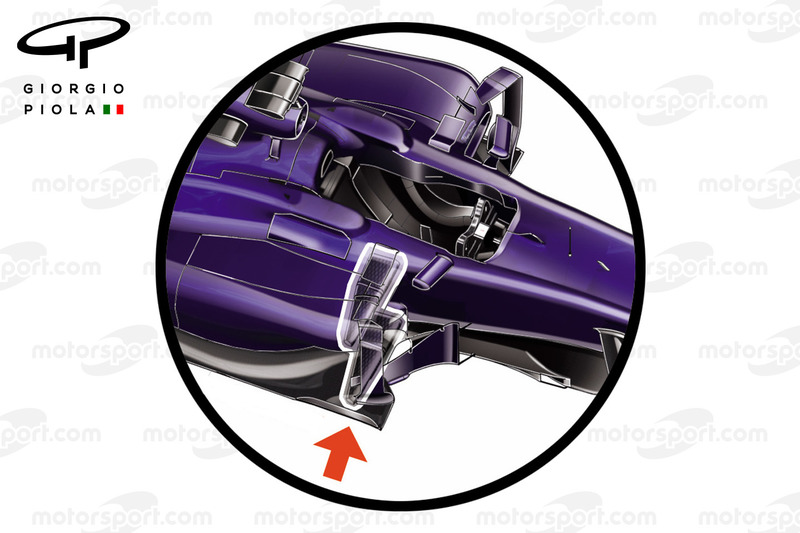 The wide, sweeping regulation changes for 2014 were accompanied by a change to the side impact protection spars, which are the first line of defence in a side on impact.

Following Robert Kubica's huge crash in Montreal in 2007, the FIA in collaboration with a number of teams conducted additional research into crash structures when hit at an oblique angle.

It is this research that led to the spars that are currently being used, the original design of which stemmed from the Marussia team and was subsequently refined by Red Bull Racing.

The spars are now able to absorb almost 40kJ of energy, in both normal and oblique impact directions. 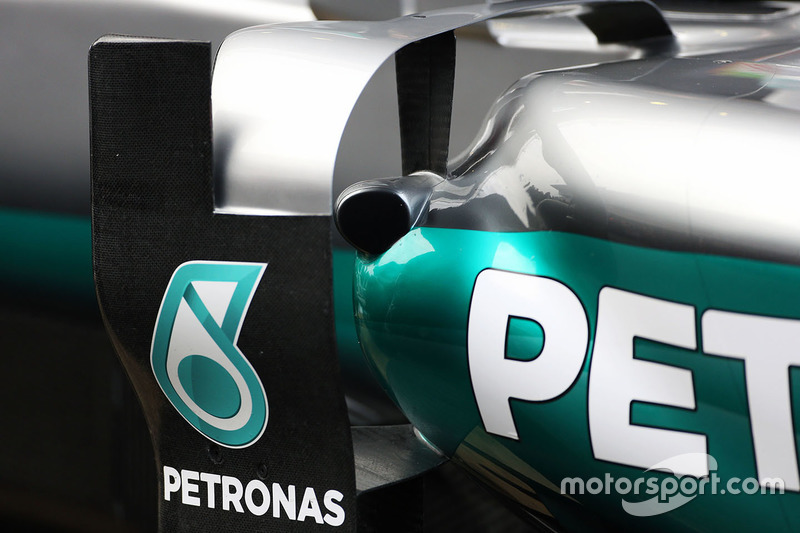 The standardisation of these side impact spars has seen many teams resorting to creating blisters on their sidepods shoulders [see Mercedes above], in order that they house the spars but improve aero in quite a sensitive area. 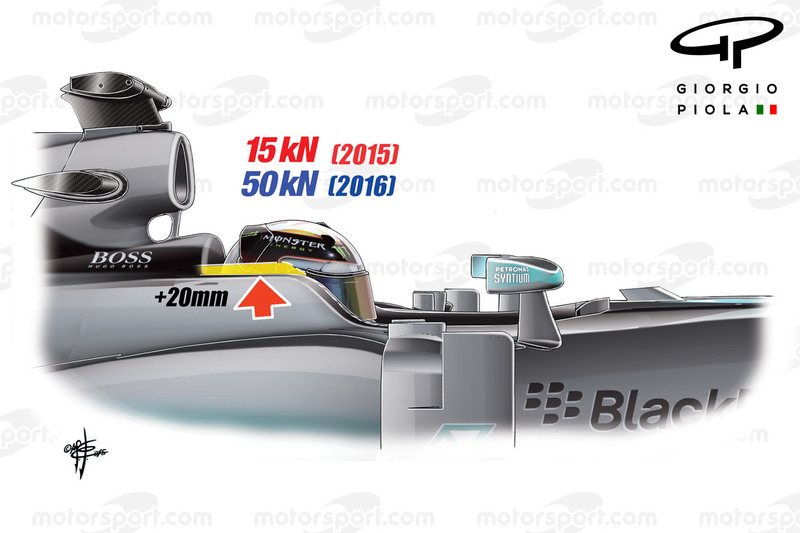 In 2007, the FIA introduced measures which required the teams to flank the cockpit with Zylon strips, Zylon is used in bulletproof vests owing to its remarkable tensile strength.

The FIA earmarked the material as a way of further protecting the driver from ballistic shards that could otherwise penetrate the cockpit.

The Zylon is mounted around the inner edge of the cockpit template, the height of which was increased by 20mm for 2016, whilst the load test was increased from 15kn to 50kn. 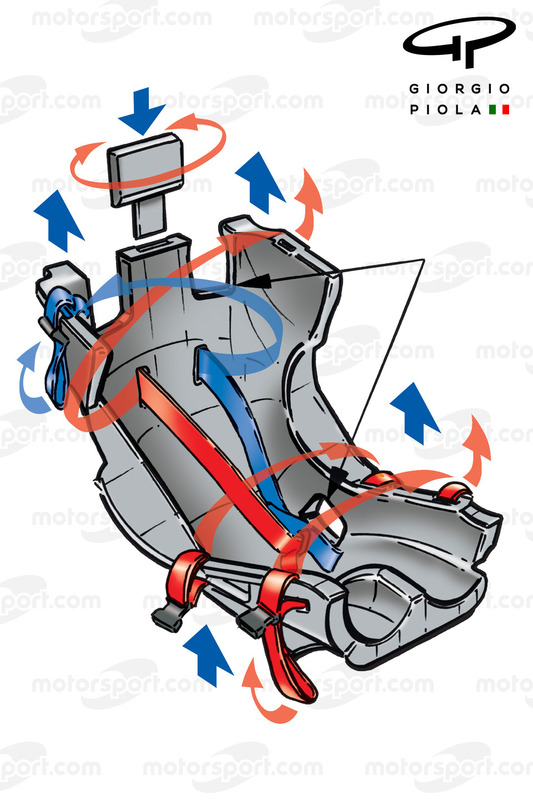 You'll often hear reference to a 'seat fitting' on the lead-up to any F1 season - this is when a driver goes to the factory to have their seat prepared for the upcoming season.

During the seat fitting, they will sit on a bag inside the cockpit, which is filled with a resin that, once dry, forms the negative mould for the carbon layup. The finished seat is a lightweight carbon fibre construction that can be easily removed from the cockpit along with the driver if they cannot exit of their own accord.

The seat is held to the chassis with two bolts, which can be released using a standard tool, issued to all rescue crews. Although it seems almost unthinkable now, the six point harness that holds the driver to this removable seat only became mandatory in 1972.

The seat has further straps attached to it in case the driver needs to be extricated, whilst a slot is added to the upper surface so that a stabilizer can be inserted by the medical team to support the driver's head and neck whilst they are removed from the car. 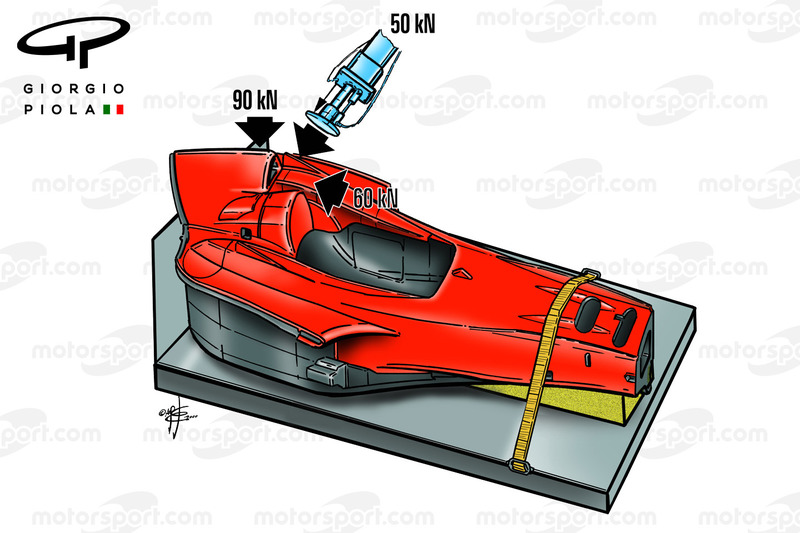 The monocoque has two roll structures in case of inversion: one ahead of the steering wheel, atop the chassis [secondary] and one that must be placed at least 940mm above the reference plane, 30mm behind the cockpit template [primary].

The triangulation of these two points means the driver's helmet should never come into contact with the ground, should the car roll over.

The primary structure is constructed taking into account the airbox, which feeds air to the internal combustion unit.

Great effort is made in order to shape this structure to improve aero whilst reducing weight. After all, this is the highest point on the car and has a genuine effect on the cars CoG.

However, the FIA insists that the structure be able to withstand a load equivalent to 50kN laterally, 60kN longitudinally in a rearward direction and 90kN vertically, as a failure of this roll hoop would be catastrophic. 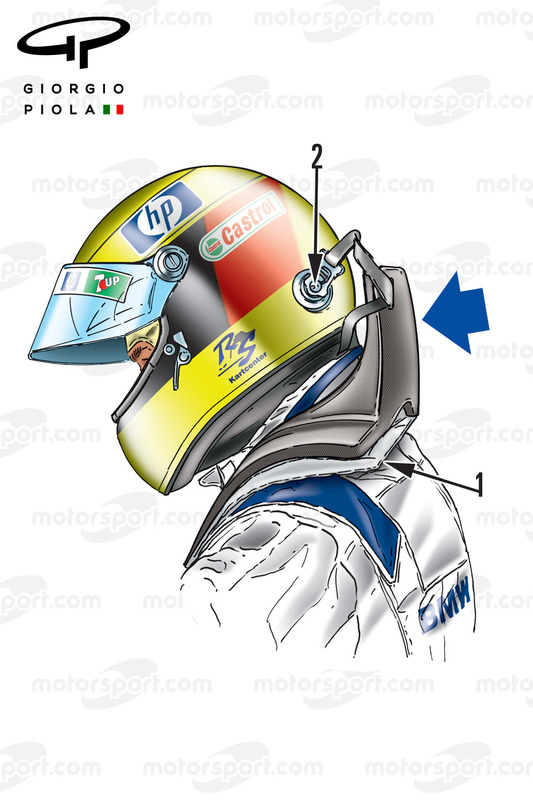 When the HANS device was made mandatory in 2003, after extensive testing many questioned why it was needed. However, it is now a ubiquitous item worn by motorsport stars around the world and has likely saved numerous lives.

The simple device retains the relative position of the head to the driver's body, transferring energy to the torso as the head is decelerated.

It is the movement of the head that the FIA is interested in as it continues to study accidents after the fact, which will be further helped over the coming years by the introduction of a high-speed camera, mounted in front of the driver atop the chassis from 2016.

The footage collected from Alonso's crash last weekend could be invaluable in future safety initiatives and studies undertaken by the governing body. 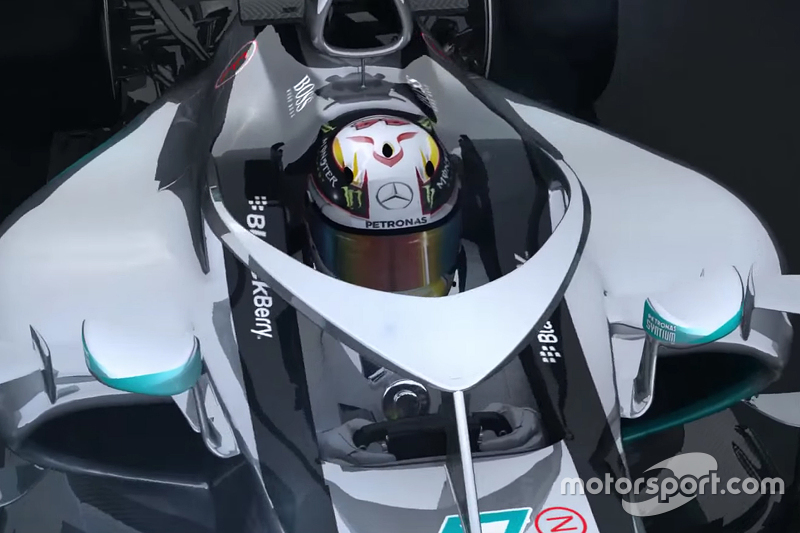 In recent months the discussion of additional head protection has come to the fore, with the emergence of the 'Halo'.

Whilst most fans seem to reluctant to see the merits, the FIA, teams and drivers alike have agreed that head protection will be introduced in 2017.

Whilst we concur that the Halo is not exactly aesthetically pleasing, it is at least better than some of the initial concepts first tested by the FIA.

The halo is a stylised version of the hoop first tested by the FIA, along with many other solutions, in order to deflect large objects, such as an errant wheel, from impacting with the driver's head. 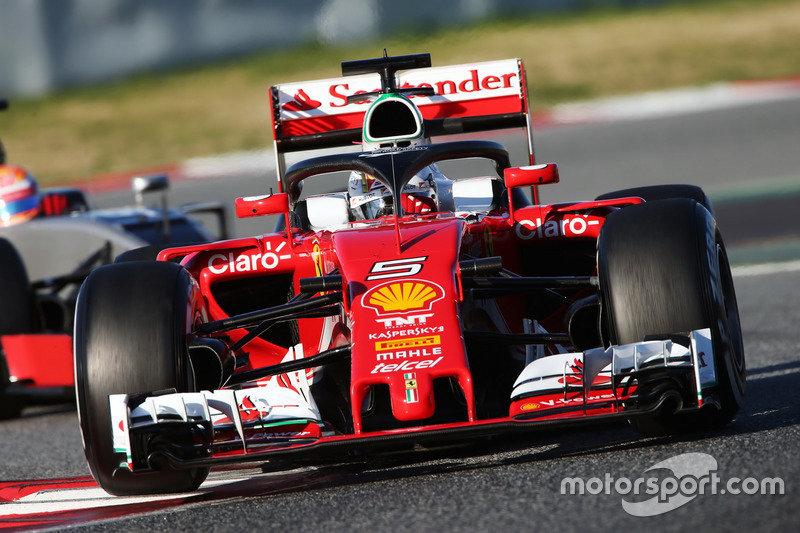 The Halo used by Ferrari during pre-season testing was not a structural device and so running was limited to installation laps, although neither driver complained of line of sight issues during their short runs whilst it was attached.

The Halo has come in for criticism based on the lack of protection offered from smaller debris, like the errant spring from Rubens Barrichello's BGP001 that struck Felipe Massa's helmet in 2009. 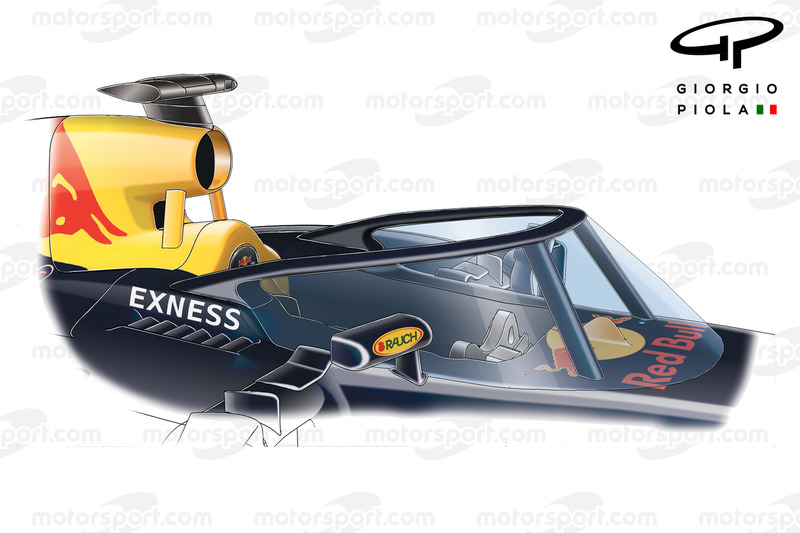 Although that was not the express intent of the additional hoop, Red Bull have since weighed in with their own iteration, featuring a windshield and dual A pillars, in order to cover both bases.

Yet it still has its detractors, with most focused on the negatives rather the benefits of enclosing the driver and shielding them from debris.

No matter which solution is ultimately chosen by the FIA for use in 2017, it shows that the governing body still strives to make improvements and heed observations from ongoing incidents.