Thanks to its change of ownership, the Sauber team has finally started to roll new parts for its car, with a big update introduced in the Belgian Grand Prix.

The acquisition of Sauber by Longbow Finance has come at a pivotal point, with the team having struggled to improve the C35, the production of updated parts proving just too costly given its precarious financial position.

The team has had a new rear wing at their disposal over the last few races but that was nothing compared with the raft of parts run on the C35 in Belgium. 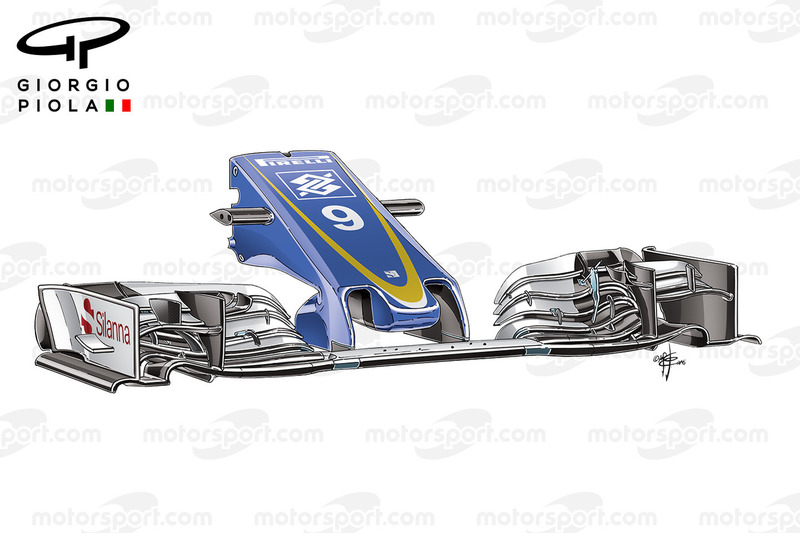 The primary structure in a frontal crash - the nose - has to be able to decelerate much of the energy being created in order to limit chassis intrusion. The current rules suggest the shortest nose section be no less than 850mm, which has proved challenging for many teams to achieve.

But with the placement of the nose tip being important to the aerodynamic interaction with the ‘neutral’ central section of the front wing, it is a gain worth chasing.

The nose used by Sauber in Belgium is similar to the one already used but the body is much shorter, placing the tip further back over the centre of the front wing. This is supplemented by a pelican-style underbelly that tapers along its length to form a fin, controlling the airflow as it moves rearward.

The wing pillars have also been redesigned to match the shorter nose body and are now much more twisted to improve the shape of the airflow that moves around them.

The front wing is one of the key components on an Formula One car as it sets up aerodynamic structures that can either be useful or destructive downstream. The old wing was a philosophy that the team have been using for several seasons and, whilst the new one shares some of its DNA, you’d probably confuse it with Red Bull’s if they carried the same livery.

Like the one on the Red Bull, the new Sauber wing features six short full-length flaps, widening the operating window of the wing, whilst the curved outer section, which helps shape the airflow around the front tyre, is much more like the ‘tunnel’ used by Mercedes.

This tunnel shape is supplemented at the rear of the wing by two strakes, which curve over to align the airflow in a similar way (below). 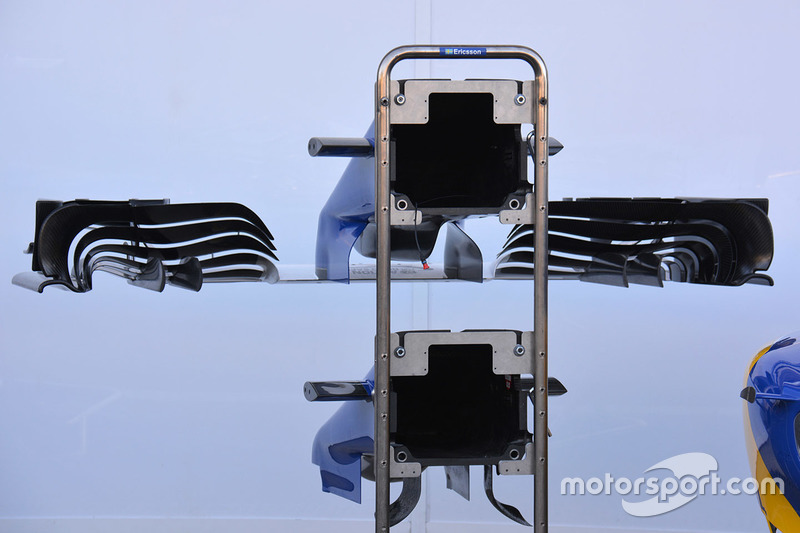 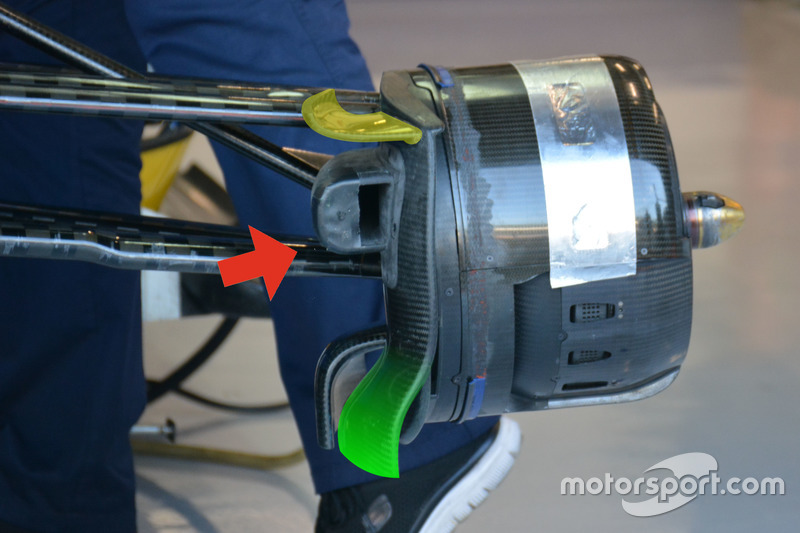 The front brake duct serves several purposes, the primary of which is to provide cooling to the brakes. But as it is in such a critical place, the aero implications must also be considered.

As such, the update sees the inlet (red arrow) moved down to allow room at the top for a winglet (highlighted in yellow), used to control the airflow discarded by the tyre, improving flow downstream.

Similarly, in a design cue now used by many of the other teams, the lower part of the main vertical fence has been displaced (highlighted in green), changing the way in which air moves between it and the tyre, as tyre deformation must be considered in order to improve the shape of wake being shed under all conditions. 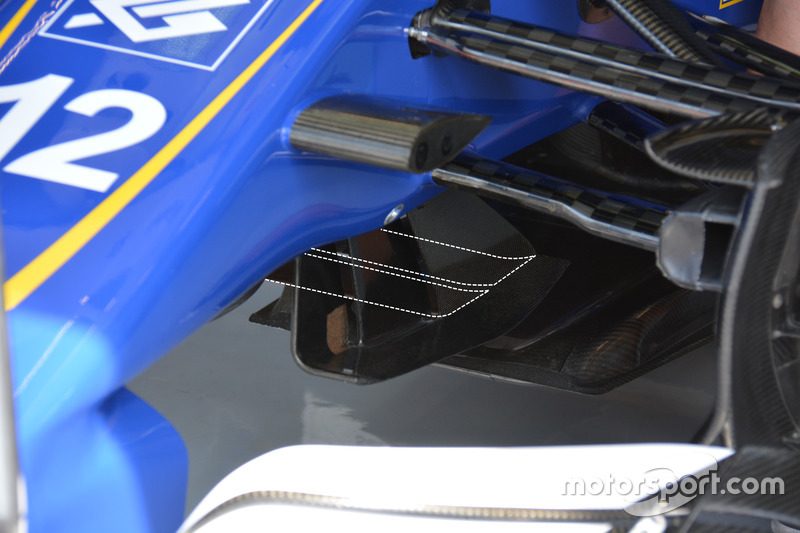 The change of nose shape and length is always a prompt to change the turning vanes too, such is the shift in pressure. For Sauber, this meant a total redesign, with not only the horizontal geometry and slots changed but also the inclusion of a large out-sweeping footplate, much like what we’ve seen Red Bull use last season.

Between the vanes, the team has also followed the trend of adding a pair of horizontal flow conditioners (dotted lines), designed to frame the airflow, teasing it in a more desirable direction. 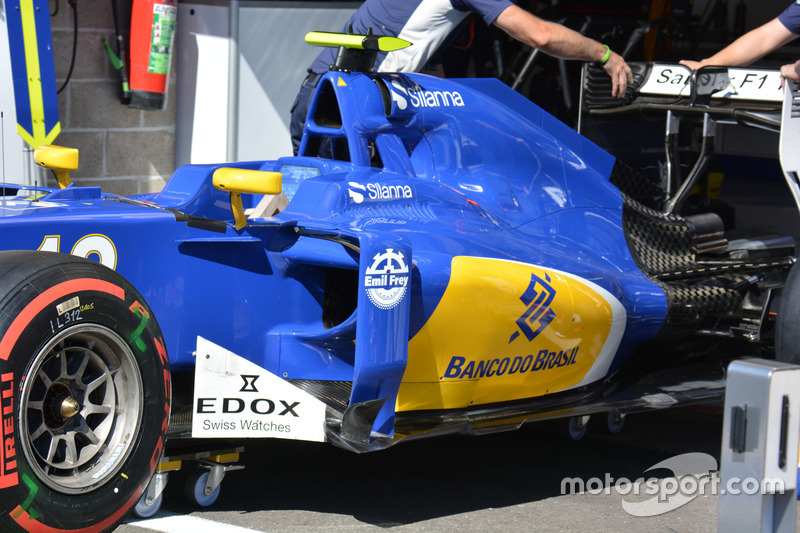 As part of the update, Sauber has decided to conjoin its vertical airflow conditioner with the leading edge slat, something many of the teams have already done as it helps frame the airflow that moves around the sidepod.

This is something that is perhaps more critical around the sidepod's shoulder, which is where the surfaces are now conjoined. 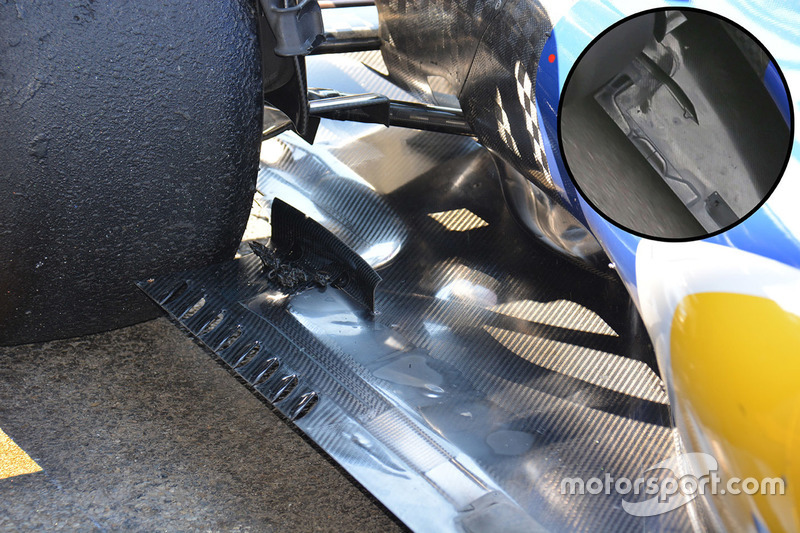 The area ahead of the rear tyre is important to the designers as it can provide a significant uplift in diffuser performance. If left alone, airflow pushed laterally into the diffuser's path as the tyre deforms can rob it of performance.

Slots and strakes are added to create airflow structures that deter the air from pushing toward the diffuser, thus improving performance.

We’ve noted that many teams have been increasing the number of slots and how far they reach down the floor for some time now and Sauber's update is no different.  The Swiss team has done away with the once trendy ‘L’-shaped trailing edge slot and singular longitudinal slot in favour of eight smaller 45-degree slots, whilst making a small revision to the vertical strake, too.

These changes are done in the hopes of making a decent difference at the rear of the car, considering the relatively large changes made at the front of the car. 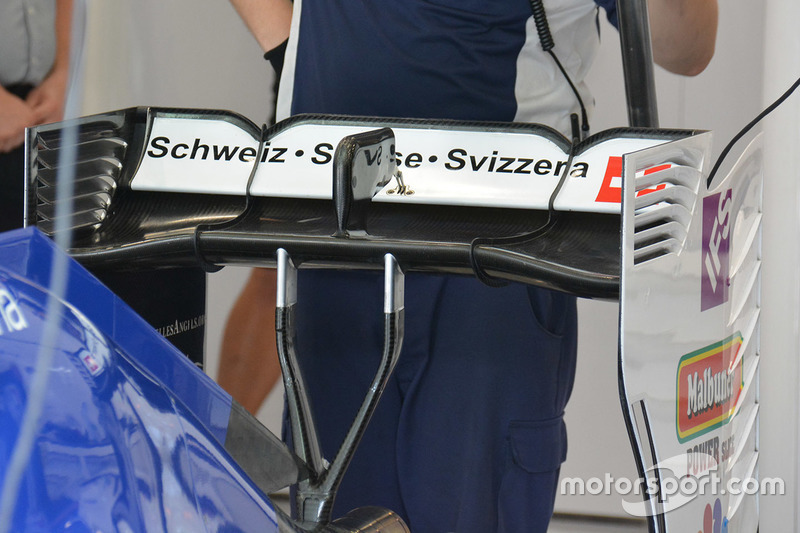