Mercedes has impressed with the continuous development of its W07 this season, and one aspect that has emerged over the past two race weekends is a new brake disc design.

It is believed to be the first time that a team has adopted such a philosophy, and shows how Mercedes is willing to keep pushing things to new limits despite its sizeable on-track advantage.

The disc features a scallop in its rim, which enlarges the surface area and changes the internal cross-section. This allows the drill holes to be shaped slightly differently, be it internally or on the surface. 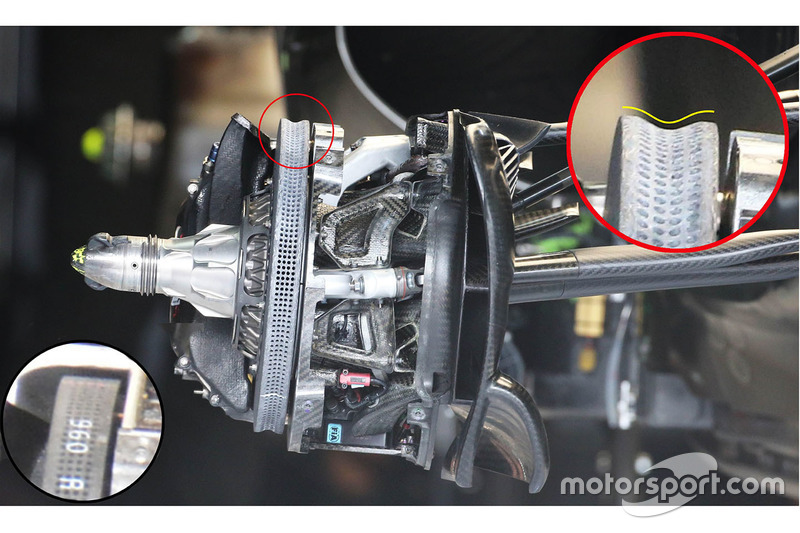 The carbon composite brakes used by Formula 1 teams currently have a maximum width of 28mm, which effectively limits the size and quantity of drill holes that can be used to dissipate heat.

At circuits that require the maximum heat dissipation from the discs, Ferrari uses a design that has the holes positioned in a chevron pattern. This allows for five holes across the rim's width and around 1200 holes in the disc in total.

Meanwhile, everyone else has continued to utilise four holes across the rim's surface with somewhere in the region of 800-900 holes per disc dependent on the supplier.

Dissipating heat from the disc doesn’t only give a direct performance advantage during a braking event, but obviously has an impact over a sustained period. It reduces the chance of fatigue, and helps the disc stay within an operating sweet spot which is good for tyre temperatures too.

The following 3D animation shows some of the complexity of the brake assembly on a modern Formula 1 car.

US GP practice as it happened