Red Bull's 2016 challenger was the first in a number of years not to feature an 'S' duct, as the team sought to maximise room for suspension componentry rather than apportion space for aerodynamic pipework.

For 2017, the designers have looked at how Mercedes and Toro Rosso achieved the packaging of their solutions last season and assimilated it into their own design.

Of course we know most of the talk about its nose centered on the inlet in the nose tip in the early stages but as we've already talked about this, the main focus is the movement of air from a forward point on the nose and the channeling of it through the nose to the upper surface of the chassis.

As we can see (above) air is taken in around the nose pylons and is ejected out of the upper chassis panel (blue arrows). 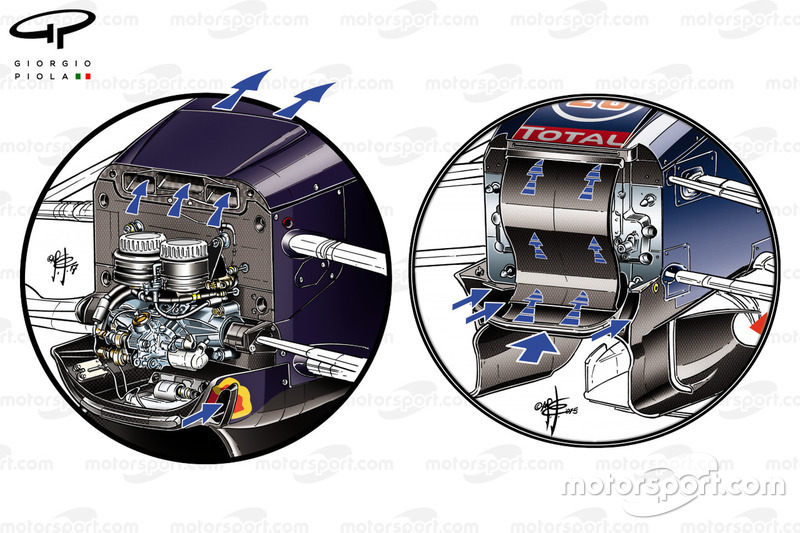 This is contrary to the previous solutions used by numerous teams, including Red Bull itself, who used to take air in 150mm ahead of the front wheel centreline (RB11 shown, right), using an S-shaped duct to channel the air ahead of the bulkhead, hence the name.

With the nose placed in position, the air is channeled through internal pipework to the vanity panel (RB13, left) which features three separate ducts in order to direct the airflow more efficiently.

Driver cooling remains the role of the small ducts at the base of the chassis, as has been the case throughout the RB10-13 lineage of cars. 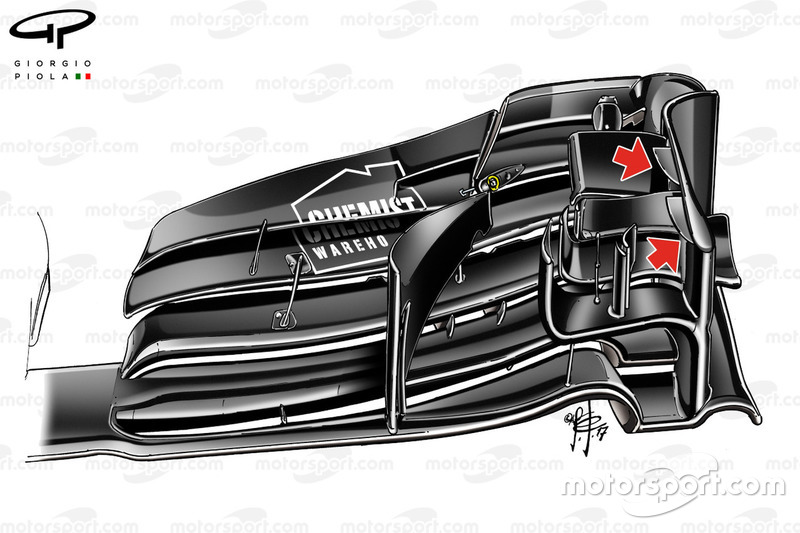 The change in regulations for 2017 will undoubtedly see more major changes as the designs mature. However, for the time being the teams have built on the philosophies they've already been using.

Williams' 2017 front wing is one such example, with the width increased to suit the new regulations, whilst changes have been made to the outer section of the wing to deal with the additional tyre width.

Two triangular canards have been added to the upper surface of the endplate (arrowed) whilst an enlarged canard sits behind the main cascade, in order that the airflow hits the front face of the tyre and moves around it more efficiently.