Renault's re-entry into F1 was always bound to be initially underwhelming, giving the precarious financial position of the Lotus team prior to the takeover.

Upon completing the buyout, Renault swiftly isolated the weak spots and has started to address them, but it's a process that takes time and patience, something that will be expedited by the signing of key personnel, including Nico Hulkenberg.

The RS16 was a difficult car, created with a depleted budget and with two power units in mind, as it was unclear if the team would be powered by Mercedes or Renault.

This is far from ideal given the intrinsic nature of the power unit's installation within the chassis and its effect on ancillary components.

The RS17 should therefore be a much more competent design that follows the burgeoning path of the 'works' team, allowing it to make decisions on both power unit and chassis design fronts that will lead to a cohesive strategy alignment.

The RS17 is full of details that have been opened up by the change in regulations but there are also several areas of the car that we believe to be placeholders and that will likely be revised for the first test - including, but not limited to, the front wing, brake ducts, turning vanes and floor area ahead of the rear tyres. 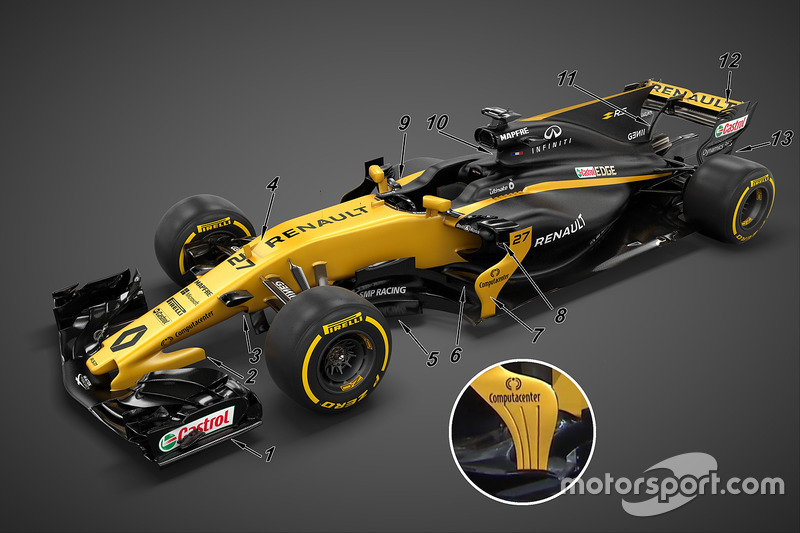 The RS17 has inherited a thumb-style nose from its predecessor but while the RS16 sported a stump, the RS17 follows the trend set by others, maximising the shape of the tip in order that it interacts with the front wing's neutral section below and allows more airflow to move under the nose structure.

As the regulations now require the nose to be 200mm longer, the RS17 features a set of extremely sculpted and elongated wing pillars [2] that will help to define the airflow as it passes by the central section.

The nose is supplemented by an 'S' duct that will take airflow from the underside of the nose/chassis [3], pass through the internalised S-shaped duct and be ejected out over the chassis [4], helping the airflow stay attached to its surface rather than detach due to the abrupt angle it has to overcome.

The outlet is part of a large vanity panel that takes a cue from the large chassis cutout used by Mercedes in 2016 and points to a much more intricate bulkhead arrangement that should permit more scope for suspension componentry, such as the hydraulic dampers we've seen a row erupt over in the off-season. 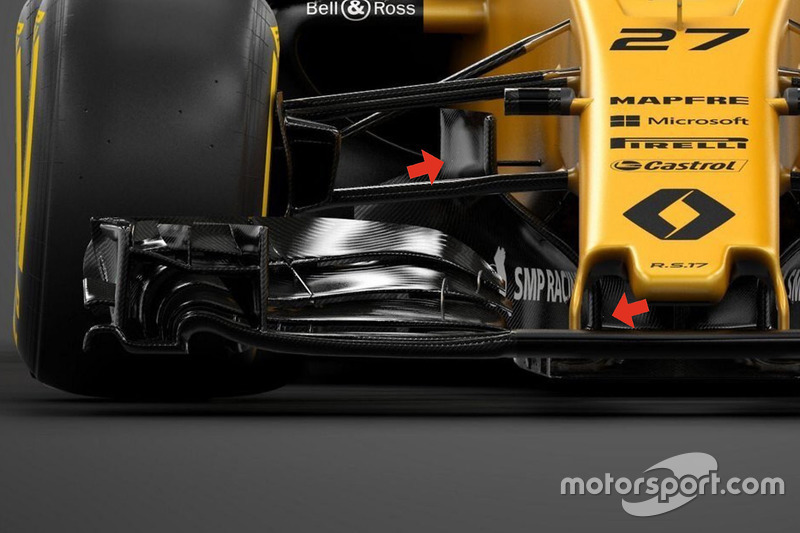 This is an area of the car that we anticipated large-scale change for in 2017, with the regulations permitting much larger structures than those used since 2009.

In the case of the RS17, we have the first signs of just how much effort will be placed on this area of the car with what seem like very tall square structures in side view [5] - but that only gives us part of the detail as from the front we can see that they start under the chassis at their base and curve outward toward the upper edge.

The bargeboards also have a horizontal section at their base, which abruptly curves upward around order to form the main vertical section but is also paired to a much smaller bargeboard that intersects with the floor's axehead.

One intriguing element of the RS17 is the shape of the front portion of the sidepod and floor, as a ramped section extrudes forward to meet with the bargeboards [6].

The team is clearly looking to maximise how airflow moves both under the floor to feed the diffuser and around the sidepods toward the coke bottle region. This could signal a desire for more aggressive solutions from the likes of Mercedes, Red Bull and Ferrari.

The sidepods themselves have been increased in width as the new regulations permit and what has been lost aerodynamically from this change in an external sense may have been made up for with the repositioning of the coolers and electronics housed within.

The sidepods are flanked by numerous aerodynamic devices [9] in order to increase efficiency, starting with twin stalk mirrors and a Red Bull-esque curved horizontal cockpit vane. Atop the sidepod are a pair of vortex generators which will work together to improve flow over the sidepods upper surface.

A Z-shaped winglet [8] arches over the sidepod's shoulder and will frame the flow around it before joining with the boomerang-shaped airflow conditioner [7], which in the physical launch variant had three slots in (inset), as the team looks to improve the efficiency of what is a complex area of the car.

The airbox is a very compact structure designed to limit the impact that it has on the airflow as it moves down the car. The very short but wide inlet is split into four sections as the team continues to use a complex airbox array to feed the various power unit coolers.

Perhaps the most startling thing about this area of the car is the extreme effort gone into sculpting the section under the airbox [10], which ordinarily needs support spars in order to deal with the loads it would succumb to in the event of inversion.

The svelte design has clearly been a priority to the team as not only will it reduce weight but it will clear a path for the airflow as it moves rearward down the car.

Expected to be a feature of the 2017 grid, a shark fin variant has been present on each car we've seen so far as the designers look to improve how the engine cover interacts with the rear wing now that it has been lowered by 150mm.

At the rear of the engine cover we find the rear wing support pylon [11], which like last year's design intersects with the exhaust, offering both stability and an adjustment to the plume as it exits the exhaust.

The new regulations have allowed the team to lift the pylon above the rear wing's mainplane where it connects with the DRS actuator pod, leaving the central portion of the wing to make downforce unimpeded by it.

The rear wing endplates are fairly complex, with the designers from Enstone picking up on the fashionable open-ended louvres first used by Toro Rosso last season [12] and continuing to utilise both the tyre wake slot near the leading edge and upwash strikes, which follow the new curvature of the endplate.