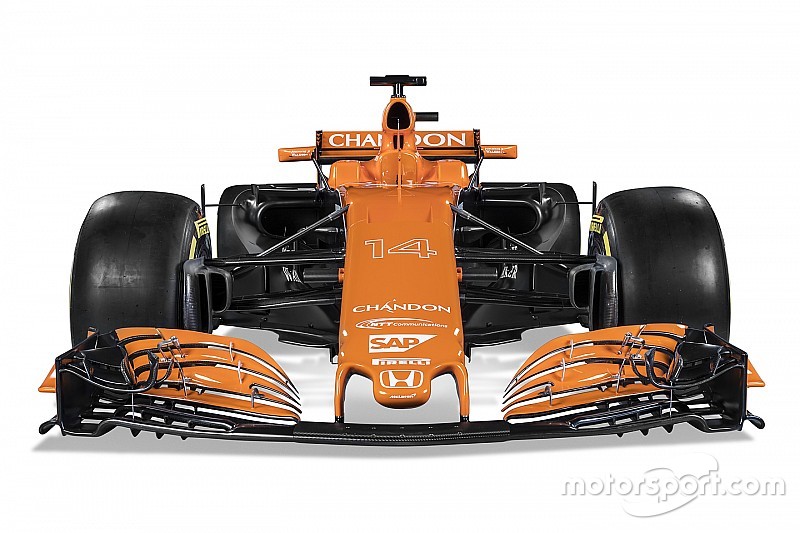 Following a rough start to its renewed partnership with Honda, McLaren is aiming to return to familiar grounds in the constructors' standings - and will hope the MCL32 is a significant step towards frontrunner status.

The car is an elegant design that follows in the footsteps of its recent predecessors, which have been described as one of the best chassis on the grid, only let down by an underperforming power unit.

Honda’s arrival a year into a new regulation phase automatically put the Japanese manufacturer on the back foot, but it has worked tirelessly to recover performance lost to their adversaries.

For 2017, Honda has decided to take some aggressive steps to make headway and the changes it's making will be helped by the lack of a token system going forward. 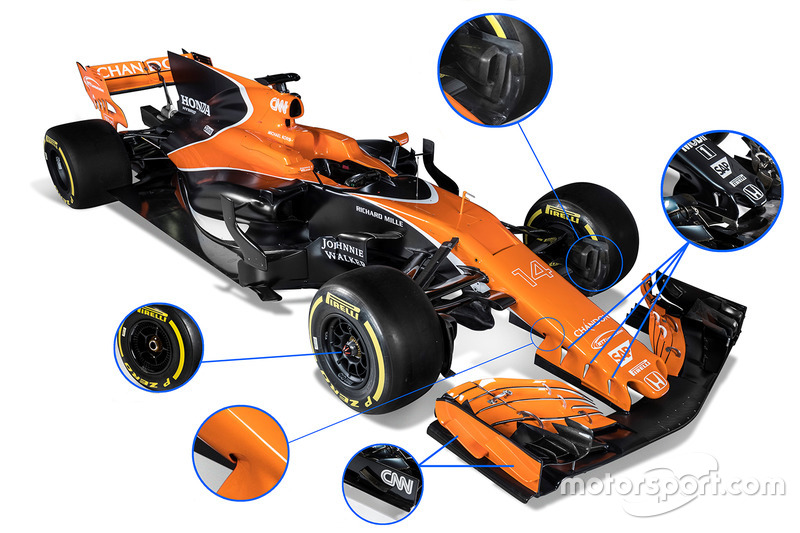 The front wing presented on the launch car is very similar to the specification run by the team in the latter part of 2016, albeit changed dimensionally to suit the new criteria and furnished with two outer endplate canards rather one, much like they 2014 version. 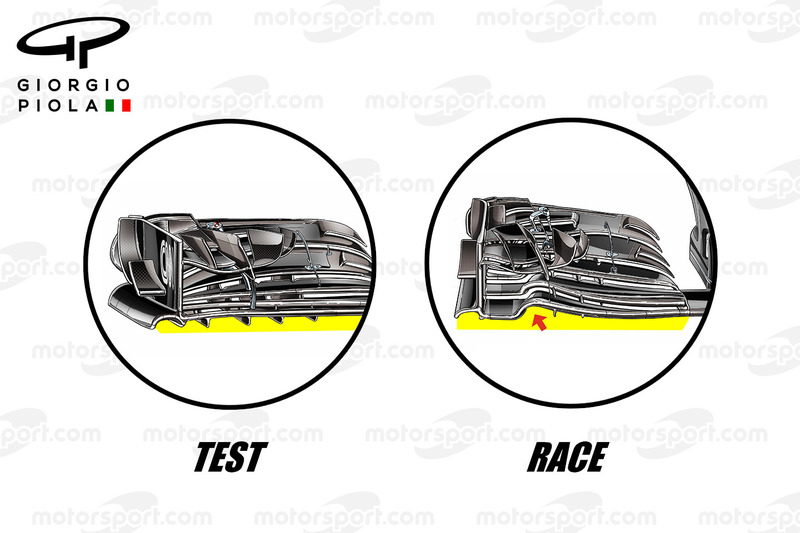 The test wing being developed by the team from the US Grand Prix onwards last season might still be part of this year's solution, but the flat mainplane design wasn't to be seen at launch. We do know that the concept is sound for 2017, given Sauber has adopted it already.

The nose is almost identical to the MP4-31’s, featuring a thumb tip nose and ‘S’ duct - although it’s not a conventional one, with the team taking the idea used by Mercedes in 2016 and adapting it for their own purposes (see inset for the location of the inlet).

The additional 200mm that is a requirement of the new regulations has allowed the team to have a rethink on their pillar design, too, with the surface elongated, and where one slot was present last year (see inset), a further two have been added.

The front brake ducts feature a twin inlet design, one stacked on top of the other, the first of which is letterbox-style while the top scoop is a more conventional scoop.

The blown axle used last season (inset) is absent from the launch car, which points us towards either an increased level of cooling being required and/or airflow being blown out through the wheel face. 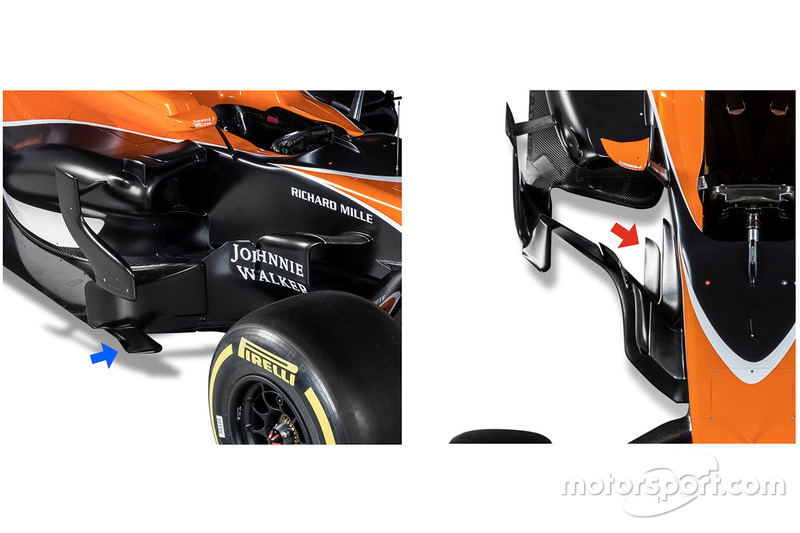 The relaxation of the regulations in order to increase downforce and lower laptimes has led to significantly more freedom around the bargeboard section for 2017. The main bargeboards are much larger than their predecessors, but lack the complexity of, for example, the Mercedes or Renault cars we’ve already seen.

That said, complexity does not equal performance - just look at the Red Bull cars from the last couple of seasons, which have been aerodynamically superior to some of the more complex machines on the grid despite themselves being sparsely populated.

The MCL32's bargeboards arch over to meet the side of the chassis with the surface used to define where airflow is directed, while two slots can be found in the main vertical surface that will improve efficiency.

The curved footplate region is closely aligned with the car's splitter in order that the pair work in tandem, while two prongs (red arrow) reach back behind the bargeboards to maximise performance ahead of the floor.

The bargeboard curves around to the floors edge, with an axehead section (blue arrow) extruding forward that takes advantage of the regulatory changes and features a curved footplate. Hung above this is an airflow conditioner that reaches backwards to align with the sidepod's outer face, protecting it from wake shed from the front tyre and improving the direction of airflow around the sidepods.

The floor's leading edge, like on the other cars we’ve seen so far, is shaped to make use of the extra 50mm radius allowed in this year's rules but, unlike many of the other designs, the floor is also fluted near the chassis, perhaps taking advantage of vortices trailing off the aforementioned prongs.

The sidepods are extremely slender, with perhaps the smallest inlet on the grid so far, pointing toward the use of a liquid-air chargecooler for the turbo, as incorporating an intercooler in one of the sidepods with those dimensions could be tricky.

The forward face and inlet of the sidepod are actually contradictory to the delta shaping that was intended by the regulations but McLaren, like the rest of the field, has circumnavigated the deltoid requirements with the shape of the floor and pushing the sidepods back out of the shaping zone.

This shape is clearly a conscious decision from the aero team as it looks maximise airflow into and around the sidepods. Astride the leading edge of the sidepod is a single vortex generator which sits on the sidepod's shoulder, while a cockpit fin straddles the rest of the leading edge as the designers look to improve the performance window. 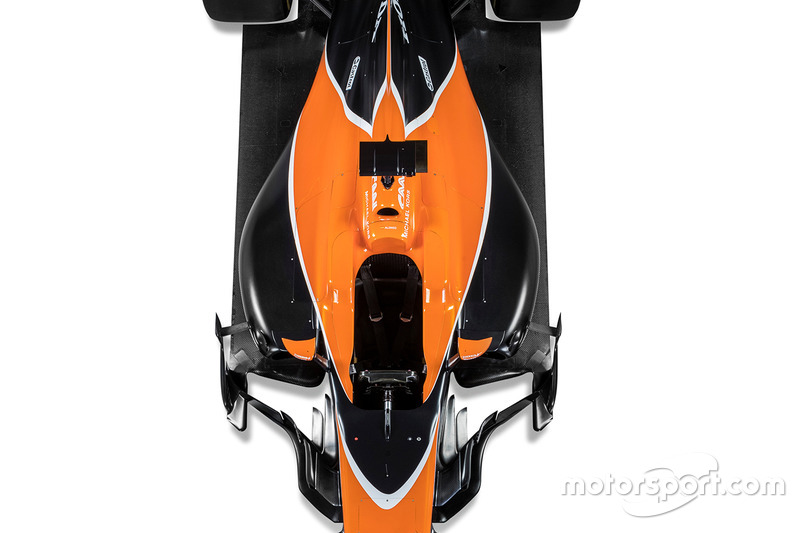 From above we can see that, although the sidepods are narrow at the front, they flare out to almost the maximum permissible width, before tapering back in towards the cooling outlet at the rear.

Returning to the ¾ view, you’ll note that although they have this shaping from above the undercut is vast, driving airflow around the sidepod into the coke bottle region - a trick that Peter Prodromou seems to have instilled from the Red Bull playbook and which should help the team mirror its sparse but performance-driven chassis concept. 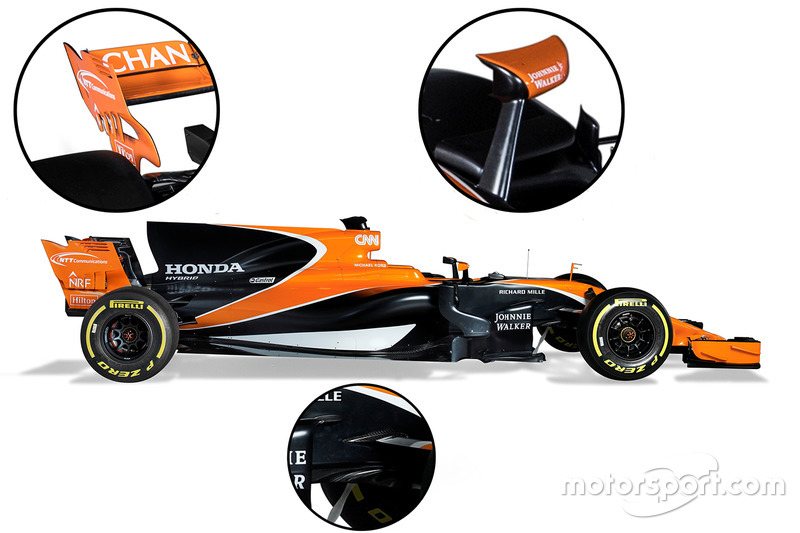 The side view offers a preview of just how raked the car's attitude is set to be, with the new regulations really playing into the hands of that sort of concept.

Of course, there are trade-offs from running a raked set-up and that's why teams like Mercedes can still manage to be successful with a limited rake profile - but for McLaren the new regs are a coup, as a shorter splitter (by 100mm) and enlarged diffuser can be further maximised if the right flow structures are created to seal the floor and diffuser's edges.

As we can see from the lower inset, the team has retained the suspension layout it introduced last season, whereby both of the wishbone's rear legs sit in close proximity to one another in order to direct airflow toward the sidepod.

You’ll note that the horizontal portion of the bargeboards mentioned earlier also ties in with this concept and will add further direction to the airflow.

The mirrors are one of those ‘the devil's in the details’ components, with the housing carefully designed to maximise aerodynamic performance, as it’s actually oversized, with the mirror recessed within. Thermal sensors are also embedded in the front face in order to monitor what is going on in real time with the new Pirelli rubber.

Love them or loathe them, a shark fin engine cover is also present, McLaren looking to improve stability and increase downforce in yaw.

And while the team is giving absolutely nothing away by showing the car with a blank floor ahead of the rear tyres, it has shown its hand when it comes to the rear wing, as it features some interesting midway strakes in what we’d consider the transition phase between the wing at its widest point (at the top) and at its narrowest (at the bottom).

This will surely have an interesting aerodynamic effect on the rear wing either in terms of downforce or drag and will certainly change the interaction between it and the diffuser below.

The McLaren is the first of the cars launched to look subtly quick, as it’s clearly not as aggressive as the likes of the Mercedes, Ferrari or Renault  - but conceptually trumps the others as you can understand how the car works as one giant aerodynamic structure while consequentially achieving less drag.

Although you'd expect the concept to remain aligned to a clean lines objective, as the team begins to maximise performance from the Honda power unit we might start to see some interesting devices being added to enhance downforce.