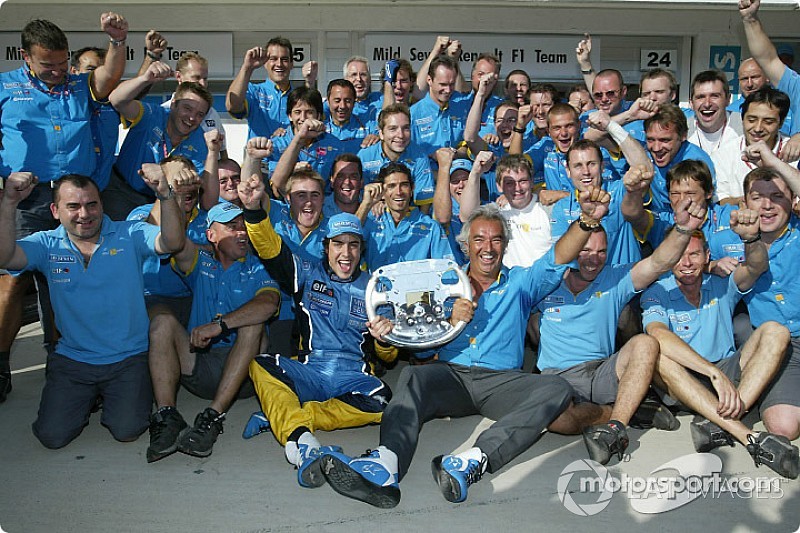 After having spent 20 years working on Formula 1 cars, Briton Greg Baker left his position of Chief Mechanic with Renault last year to spend time with his family in Montreal.

After his apprenticeship, Greg Baker began his motorsport career with Tom Walkinshaw Racing, working on the Group C cars from 1990 to 92. He then became the No. 1 mechanic at Williams, which ran three Renault Lagunas in the exciting British Touring Car Championship.

Baker then graduated in Formula 1 with Arrows-Yamaha, again as No. 1 mechanic. After four years with Arrows, he moved to Renault where he won two World Championships with Fernando Alonso. Finally, he spent the last five years as the Chief Mechanic with Renault/Lotus, working with another past World Champion, Kimi Raikkonen.

Greg, all Formula 1 drivers are exceptionally gifted racers, but they also are incredibly selfish individuals and some of them are pretty temperamental, I think. What are your thoughts?

“Well, yes. A few years ago, one of our drivers had been complaining for a couple of races about bad pictures on his TV screen. He got fed up and threw the remote control through the screen! His engineer came on radio to ask for a new TV screen. We didn’t give him the new TV, and we waited to the next session to get him one, along with a bubble wrapped remote control. He eventually saw the funny side of it.

A few years ago, we ran a Brazilian driver who crashed with a couple of laps to go in the race. We asked him why did he crash and he replied “My drink tube fell down. I looked down in my helmet to get it back in place.” And he went off and crashed. I think he could have competed the two remaining laps without the drink tube. You’re frustrated at things like that when they happen, but then you have a giggle about it a few years later.

“I really liked working with Kimi [Raikkonen]. He brought so much to the team [Lotus]. After he won in Abu Dhabi, I looked for his guys [mechanics]. Can’t see his car crew anywhere. He had them all at the terrace on top of our hospitality unit, and there they are with Kimi, with a couple of beer cases, just relaxing and chilling. He really brought the team together.”

Talking about Lotus brings back memories of the serious financial difficulties the team faced that made your job and your life pretty difficult, isn’t it?

“In terms of hard times, the period before Renault purchased Lotus was really difficult. Two years ago at Spa, the receivers were knocking in our doors. We had bailiffs at the circuit. The trucks were impounded. They wanted to shut down our garages. They eventually got persuaded that this was not a great idea, so they let us race in Spa. The bailiffs watched us pack up, which was ironic because we’d just finished third with Romain [Grosjean].

The Italian Grand Prix was held on the following weekend. The trucks were impounded in Spa. After much talk, the trucks finally took the road and we only started to set-up the car on Thursday afternoon. We had to turn the cars overnight. That’s when you see where a good team is. We all stick together. Despite the fact that it was one of the hardest years, it was probably the most enjoyable.

A few weeks later in Japan, the financial problems were still unsolved. Because of late payments I believe, they did not let us use the hospitality unit. We had no place to eat. The Paddock Club came in and offered us their facilities and we ate with the staff of the Paddock Club. We spent the week eating there. All the teams came and asked if we’d need anything. “Do you need coffee? Do you want tea? Do you want some sandwiches?” That’s how F1 is.

One final story. At Lotus, we had an issue with tire blankets going down. And the money wasn’t there to replace them. When teams like Ferrari and Toro Rosso come along and offer their spare tire blankets for qualifying, it shows the kind of spirit that exists in F1.”

You worked on the championship-winning Renaults R25 and R26 of Fernando Alonso. How was it like back then?

“We won a couple of World Championships with Fernando [Alonso]. The fantastic thing is that we saw it coming from a 17-year-old teenager. We saw him develop all the way through. When I started at Renault, the French manufacturer had just taken over the team that was known as Benetton. They had a five-year plan to become World Champion with Fernando. And they did it. It was very hard work, but these were good times. It was a lot different to what is F1 now, as we were a relatively small team. Fernando was and is still a phenomenal driver. Even when I finished working in F1, he came along to chat for a moment, asking if everything was fine.”

A flamboyant personage, Flavio Britore, headed the team. How was he like as a team boss?

“[Smile] Flavio was great! He was a character, an entertainer. He was the kind of guy who would walk in the garage and he didn’t even have to look at you and you knew you had done something wrong. He had that presence about him. You knew where you stood with him. He probably said a few things he shouldn’t have said over the years. However, he brought the team together. There isn’t really anybody, and I don’t think there has been anybody that has come across like he has.”

Working in F1 brings moments of intense joy but also instances of immense disappointments. You’ve gone through that also, haven’t you?

“I started in F1 in 1997 with Arrows. Damon [Hill] had just won the World Championship with Williams and I have no idea how Tom [Walkinshaw] managed to get Damon on board with the race number 1. He expected a lot more, and the car was not particularly great. I think the first shakedown we did with the car at Silverstone, the front wing dropped off. That was a struggle. And then came Hungary, and for a 50 pence washer, we nearly won the race. We worked all night before the car to fix a wheel speed sensor issue. We also changed the hydraulic manifold as a precaution, and it failed during the race when Damon was leading. You’re so close to winning and he came on the radio “I’ve got a problem”. That was hard to take.”

F1 mechanics have a great life: you travel the world, work on the most exotic machinery, brush shoulders with some of the top drivers in the world as well as movies stars, VIPs, athletes and models. But is it a really hard job in fact?

“You need to be quite tough to work in F1. It’s quite a hard environment. If somebody gets injured, all of a sudden there are 15 guys walking around covered with plasters. There’s no sympathy. You can’t be shy in F1.

Today, F1 is really business oriented; you’re there to do a business. The funniest times now happen away from the race circuits. The guys enjoy road trips. Like in between Belgium and Italy, they take two or three vans and they go to Chamonix. They’ll spend a few days off there. When you’re back at the track, things are really intense. We travel a lot, around the globe, and we’re away from our families 180 days per year, and then we work for long hours under tremendous pressure in the garages. The F1 cars are now extremely complex machinery, much more complex than when I started 20 years ago!”