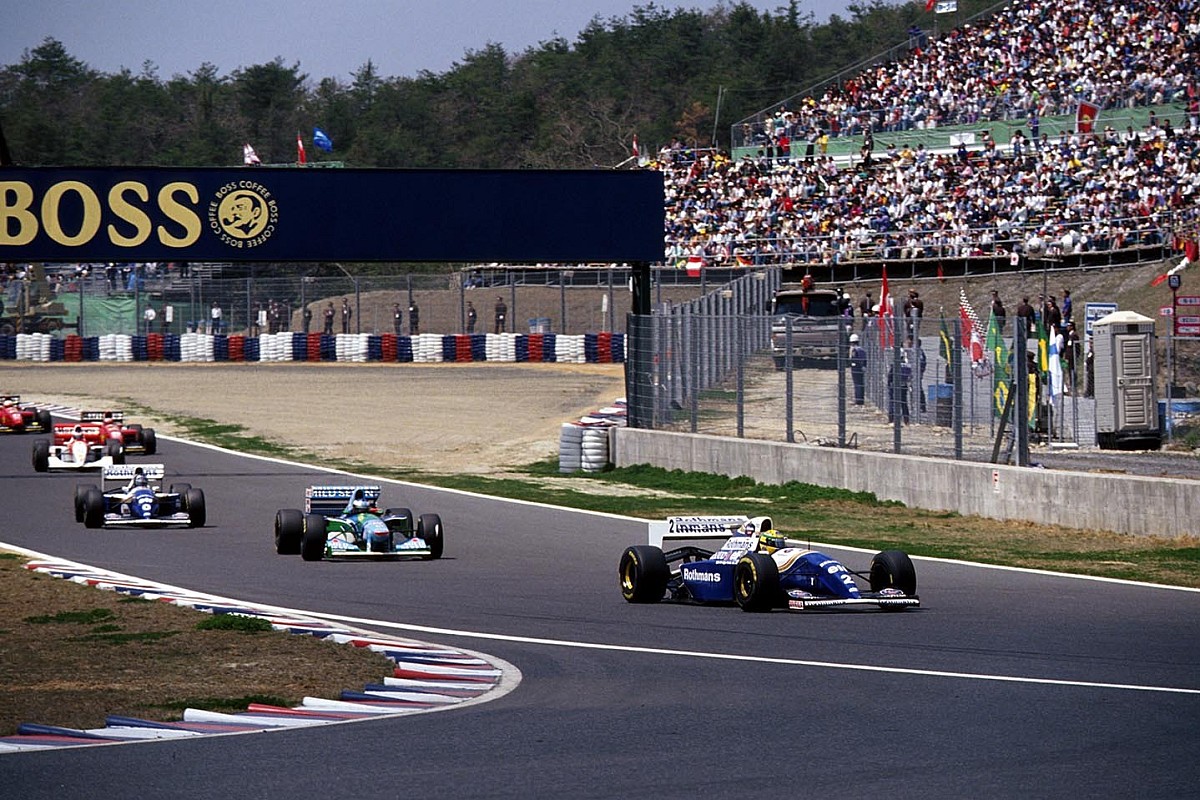 In 1994 Japan joined the exclusive club of countries that have hosted two Formula 1 races in a season. The generically-titled Pacific GP was held on April 17th at a remotely located facility close to the town of Aida, in front of a crowd that had been ushered in by a fleet of buses.

In his second start with Williams Ayrton Senna took pole but crashed out at the first corner, leaving Michael Schumacher to win as he pleased for Benetton.

The race was the first of a five-year contract, but after just one more event in 1995, it dropped off the schedule.

Aida, or TI Circuit as it was officially known, remains one of the most oddball venues ever selected by Bernie Ecclestone. And yet it is significant for a couple of reasons. Its failure signalled the decline in Japan’s infatuation with motor racing, while at the same time it heralded F1’s future push into the wider Asian market, which would kickstart properly with the Malaysian GP in 1999.

TI was built on the back of Japan’s thriving late eighties “bubble” economy. Honda’s contemporary success in F1 put a focus on motorsport, and that encouraged companies and wealthy individuals to pump money into racing. Leyton House was probably the most visible manifestation in Europe, but other F1 teams had investors and sponsors from Japan.

The domestic scene thrived as well with healthy F3000, Group C, Group A and F3 championships, all of them attracting European drivers who were paid salaries that they could only dream about back home.

Since the 1960s Japan’s racing scene had focussed on Suzuka and Fuji, both of which were looking a little tired, despite the former being spruced up for its first F1 race in 1987. The second division tracks were Sugo, Mine (known as Nishi-Nihon until a facelift) and Tsukuba.

Given the money swishing around and the associated construction boom it was no surprise that entrepreneurs would view new race circuits as viable projects.

Two major rival projects emerged at the same time – Autopolis and TI Circuit. Both were to be state-of-the-art facilities, and both targeted international events, including F1. The downside was they both were carved out of mountainous countryside in remote locations, and thus access was always going to be an issue. 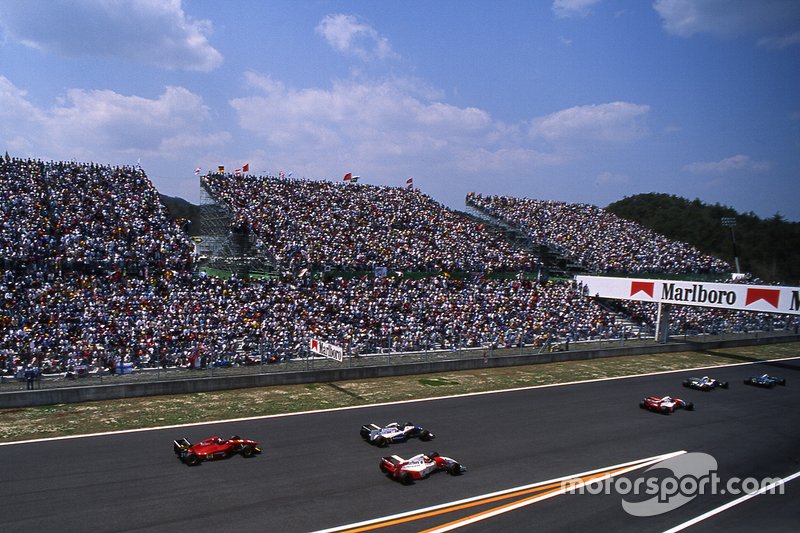 The start of the race

Autopolis was the first to reach the start line. The track was the brainchild of real estate developer Tomonori Tsuramaki, who chose a location in the Fukuoka region in the south west of the country – not quite as far away from Tokyo as it was possible to get, but close.

His choice of a futuristic name was an indication of the ambitions he had for the place, and he even promoted it via sponsorship of the Benetton team.

Sat atop a mountain, Autopolis emerged into view like a James Bond villain’s lair. Money appeared to be no object for Tsuramaki, who splashed out millions on art works than he planned to house at the venue. In 1989 he achieved worldwide notoriety when he bought a Picasso for $51.6m.

In 1991 the track hosted the finale round of the FIA World Sportscar Championship, in what was in effect a test of its suitability. Fog wiped out Saturday’s running, but when the race finally got underway it was won by the Mercedes of Michael Schumacher and Karl Wendlinger. The weather aside, the event ran smoothly, albeit with a tiny crowd.

Tsurumaki successfully lobbied Bernie Ecclestone for an F1 race, and an Asian GP appeared on the provisional 1993 calendar. However by then the Japanese bubble economy had burst. Tsurumaki’s financial situation unravelled, and his Autopolis project imploded – the construction company ended up owning the track, and his art collection was seized.

His failure handed an F1 chance to the rival TI Circuit. Hajime Tanaka’s family had made their money in mining, but he also owned an antique watch business and developed golf courses – a lucrative industry in Japan.

A visit to the 1986 Le Mans 24 Hours sparked an interest in racing. He subsequently met Ecclestone, revealed plans for his Tanaka International Circuit, and pitched for an F1 race.

Given that Honda-owned Suzuka was about to hold the first Japanese GP since 1977 the chances of a race seemed slim – at the time a second event in the country didn’t appear to be an option.

However over the next couple of years Ecclestone warmed to the idea, well aware of the potential sums involved. The higher-profile Autopolis was first in line, and in effect TI had a reserve spot.

Located in Okayama prefecture near the town of Aida, TI was not quite as far from Tokyo as Autopolis, but it had a similar access problem. It was around two hours by road from Osaka, the nearest major city, and some distance from any railway stations or towns of any decent size. The roads leading to the track were slow and narrow.

Tanaka opened the venue in 1990 with a historic sportscar race, and in honour of the drivers who appeared corners were given names like Moss, Redman, Hobbs, Piper and Attwood.

The organisation was set up like one of Tanaka’s golf clubs. Some 300 individual or corporate members paid 15 million yen, around £90,000 at the time, to join. That gave them access to enjoy the facilities and drive around either in Tanaka’s old Tyrrell or in their own classic cars, which they could also keep in garages at the venue. Tanaka was ahead of his time – similar concepts have subsequently been adopted elsewhere.

He continued to push for an F1 event until the failure of Autopolis opened the door for him in early 1993. He immediately contacted Ecclestone, and after meetings in April and May, he signed a five-year promoter deal in June.

Tanaka then had to navigate some complex red tape with the Japanese motor sport authorities, who appeared to be non-plussed by the whole concept of a second race in their country – and had also been frustrated by the Autopolis failure.

However, that October the FIA confirmed an April 1994 date, separating the race from the established Suzuka event by a full six months. It was to be distinguished from the failed Asian GP plans by being given the new Pacific GP title, which Tanaka saw as classier, with a little Californian aura to it.

Ecclestone had a growing interest in the Asian market. Construction had already started on a track in Zhuhai, which was intended to host a Chinese GP, and he was also talking to Singapore and other countries in the region.

In the autumn of 1993 I visited TI for the first time – it was a quiet week day but by co-incidence Jonathan Palmer was there giving rides to prospective purchasers of the McLaren F1 road car – and I also met Tanaka in his Tokyo office, where he outlined his plans.

Inevitably access was a concern. It was less of a problem for drivers and team VIPs, who were allocated most of the 200 rooms in a cabin complex around the track, a short walk from the paddock.

It wasn’t as well-equipped as the Suzuka Circuit Hotel, never mind the five-star facility that the lucky few would have enjoyed at Autopolis. However it was better than the long and winding drive to local towns that mechanics and media members had to deal with.

TI came up with a plan that would be adopted years later by the likes of Austin and Paul Ricard, obliging spectators to come by bus. Japan Travel Bureau, known as the world’s biggest travel agent, was a sponsor of the race. A race ticket was a package, including a seat on a bus from your home city, Okayama Airport, or a station close to the circuit. The plan was to sell up to 100,000 tickets and rent 2000 buses – no small undertaking.

The ’94 race weekend ran without major dramas, and most people were impressed by the pit and paddock facilities – once they’d actually reached the place via various combinations of air, train and road. However the 2.3-mile track itself was slow and underwhelming, and something of a missed opportunity. 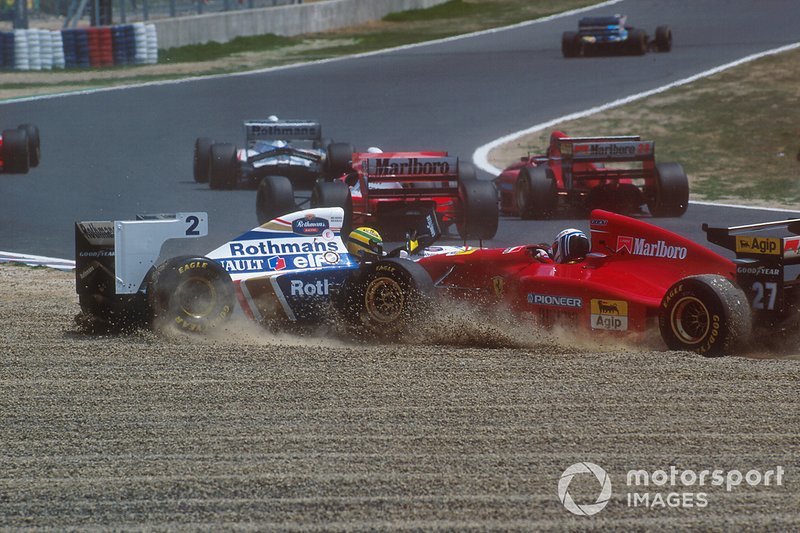 Despite the gripes about access the race reappeared on the 1995 calendar. However in January there was a major earthquake centred on nearby Kobe, which cost over 6000 lives. The track wasn’t directly affected, but the Okayama authorities decided that it was inappropriate to hold a major international sporting event as soon as April.

Ecclestone found a new date, slotting the race in just a week ahead of Suzuka in October. Inevitably that created issues for spectators who couldn’t justify attending two events on consecutive weekends.

As in 1994 the race weekend ran without dramas, and it saw a second victory for Schumacher, who also clinched his second World Championship. He celebrated that night in the restaurant at the circuit’s accommodation complex.

With a few days to kill before Suzuka many F1 folk headed to Tokyo, where Fuji TV hosted a Tuesday night party in a giant nightclub. All the drivers were invited, and most of them showed up. It was quite a night…

We didn’t know it at the time, but Aida’s short chapter in F1 history was already over – the race was absent from the 1996 calendar, notwithstanding the five-year deal. The numbers didn’t add up for Tanaka, and in the post-Senna, post-Honda era the previously massive interest in the sport in Japan had subsided, and two races made no sense.

In truth, nobody missed it. Had the actual track been a Spa or a Suzuka it might have been worth the logistical hassles of getting there, but despite its picturesque location, it was too tight and slow to provide any kind of challenge.

Tanaka’s original TI business folded in 2003, and the circuit survived with new ownership and a new name, that of the local Okayama area. Over the years it has become much more established as a domestic venue than it was in the F1 days, and holding rounds of both the Super GT and Super Formula series. From 2008 to 2010 it even had a brief international return via the WTCC, before the event was switched to Suzuka.

After the loss of the Pacific GP Ecclestone continued to push for more Asian races. Zhuhai didn’t come to fruition, but in 1999 Malaysia showed what could be done if you had government funding and Hermann Tilke to pen you a track. It was to be the start of a new era of expansion.