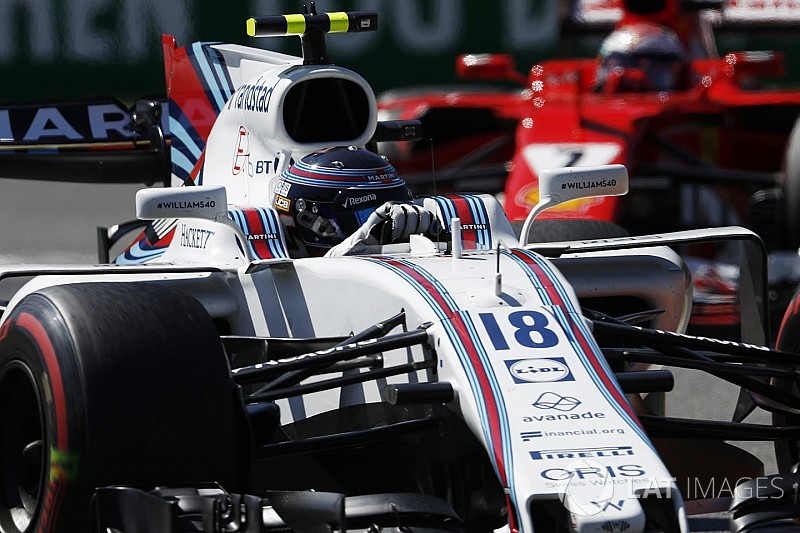 Williams rookie Lance Stroll, who became the youngest-ever front-row starter in F1, says a lock-up at Turn 1 turned his Italian Grand Prix from attack to defence.

Stroll had been chasing after Force India's Esteban Ocon from the start, after the Frenchman passed him into the first corner.

But after a slow pitstop, he locked up during his pursuit in the closing stages, which pushed him back into the clutches of his chasing teammate Felipe Massa and Ocon's teammate, Sergio Perez.

"I felt very good on the second stint, on the soft tyre, catching Esteban again," said Stroll. "But then I made a mistake and I locked up into Turn 1, which was devastating, because I went from attacking him to backing off and defending from Felipe all race.

"That was pretty nerve-racking, it came close at the end, good wheel-to-wheel racing, but great fun."

Stroll said he enjoyed his first-ever front-row start to a grand prix, but pointed out that race winner Lewis Hamilton's aggressive defence after the lights went out cost him the position to Ocon.

"I'd had a great start but then Lewis defended me, and it cost me time because I had to back off and let Esteban go, which was a bit of a shame.

"We had good pace, attacking Esteban in the first stage, got close a few times but never to get by him – it's tough with the Parabolica here, you lack a lot of downforce, so you're never quite close enough for Turn 1. It was a good fight.

"It was a bit of a shame with the pitstop, we had a very bad pitstop – and I think we were maybe able to jump him there, it was an opportunity but unfortunately we just missed out with the rear left. Not ideal."

Stroll added that the double points finish was a huge boost for Williams, after a poor series of races dropped it way behind Force India in the constructors' standings, and was in danger of losing fifth to Toro Rosso.

He said: "It was so good for everyone after struggling so much, everyone was just hoping this was the weekend that we can get back on to our feet, and then pulling it off in qualifying and both cars in the points is a great weekend for the team."