Stroll: Baku win was mine if I'd defended harder 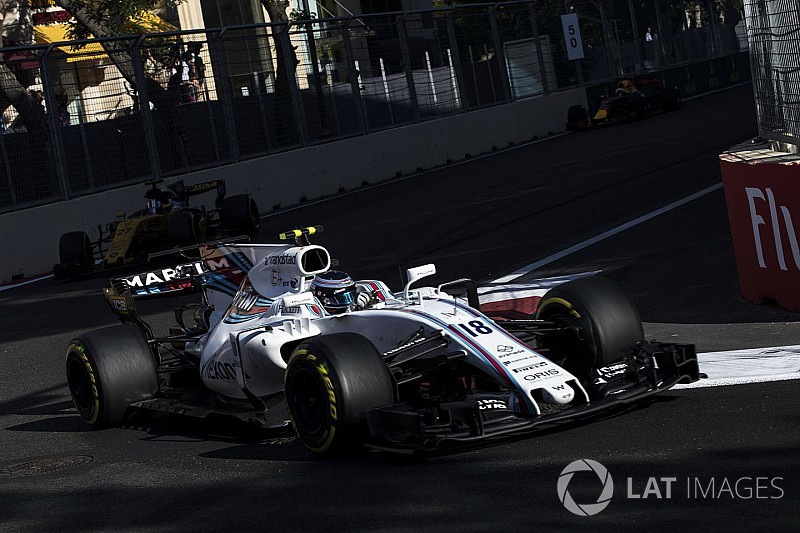 Lance Stroll believes that victory in last year's Azerbaijan Grand Prix would have been his if he had been more aggressive against Daniel Ricciardo at the red flag restart.

Stroll was running in third place at the time – behind Lewis Hamilton and Sebastian Vettel – when Ricciardo pulled off a brilliant dive down the inside at Turn 1 on lap 23 having also leapfrogged Nico Hulkenberg and Felipe Massa.

Reflecting on that moment, Stroll thinks that had he been more confident and closed the door on his Red Bull rival, then their relative car performance would have been enough to help him to a shock triumph.

"If I look at it today, I probably could have won the race," Stroll said in an exclusive interview with Motorsport.com.

"I would've defended Ricciardo in Turn 1 more if I would have thought he could have dived from so far. But he made it work.

"I braked early because there was a lot happening on the restart and the tyres - everyone was struggling with very cold tyres on a restart. So I braked early, not really knowing that he was there.

"But then when I saw someone come in a mirror I really knew he was committed and I cannot turn in, otherwise we'll crash. So that was a bit late.

"It's always easy to say, of course, as everyone can do something better when you look back at a race, you say "oh, this or that", whatever, but that I saw afterwards. And the rest, I mean was pretty good."

Although Stroll could not respond to the charging Red Bull – and even lost out to Valtteri Bottas on the final lap – he thinks that things would have been different if Ricciardo had been stuck behind him.

"I really knew that we could hold him off, because they [Red Bull] had problems. I remember my engineer telling me they had problems with heating or whatever, and they had to get by us.

"I knew we also had really good straight line speed, so I believed that we could hold them off. But yeah, I mean he did a great move on me there and yeah, I guess looking back at it I probably could have closed the door a little bit, for sure."

After a difficult start to last season, Stroll's performance in Baku helped silence his sceptics – and proved to be the Williams team's best performance of the year.

Reflecting on the strength of the team that weekend, the Canadian said that the Grove-based outfit may never know why things were so good there.

"We had very little limitations, the car felt just very easy to drive, and everything came together," he said. "I mean maybe just the nature of our car suited that track.

"I don't think we still know all the answers, all the reasons why, but the type of corners, the long straights, you know… I think the car felt really good in the corners.

"And obviously we had a very competitive car on the straights, so you know it probably just suited our package very well."

Azerbaijan GP: Can Mercedes F1 power secure their first victory of the season?