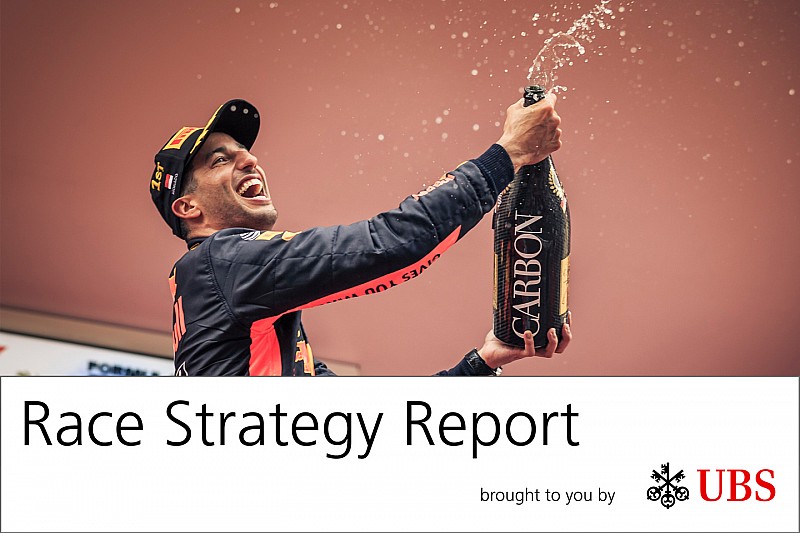 James Allen analyses the Monaco Grand Prix, as Red Bull’s Daniel Ricciardo pulled off an amazing victory, but what could Ferrari’s Sebastian Vettel and Mercedes’ Lewis Hamilton have done differently to beat him?

Normally when the leader of a Grand Prix has a problem on the power unit that costs him 160hp, over two seconds a lap of pure performance, the pursuing drivers will find a way past.

Had Daniel Ricciardo’s problem occurred anywhere other than Monaco, they would have done. And had it occurred before the only round of pit stops in the race, then he might have been vulnerable to a strategy move, like an undercut, from Sebastian Vettel or Lewis Hamilton.

But Ricciardo had made his only stop of the afternoon before his MGU-K failed. Although he had to play with the controls of the car, shifting the brake bias forward, for example, to help the rear brake temperatures, his car’s gentler treatment of the softest tyres in the Pirelli range was superior to Ferrari and Mercedes. And that proved to be enough to keep him in position on this most difficult of tracks on which to overtake.

Because it’s Monaco; track position is everything, as Lewis Hamilton learned to his cost in 2015 when he tried to make the extra stop under a Safety Car and lost the race.

That’s why both he and Vettel were reluctant to try something at the end of the race, a dramatic second stop and final attack phase. Despite toiling with the tyres they had, track position was considered king. 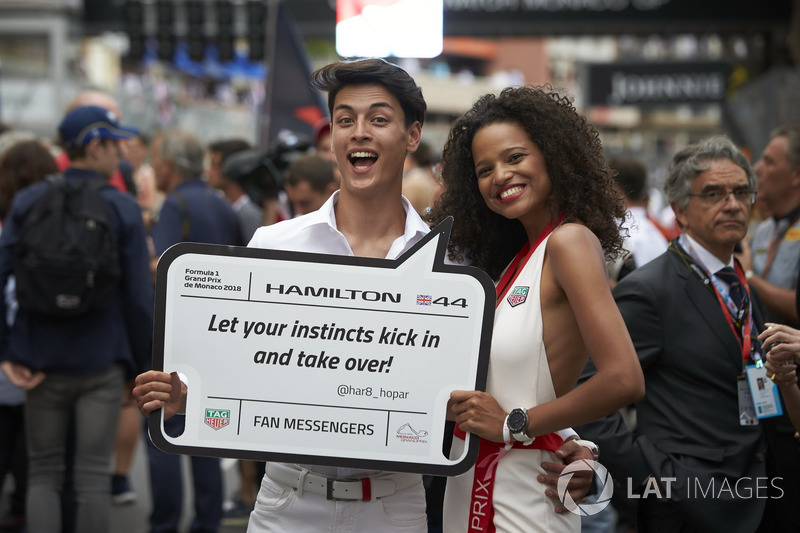 The debut of Pirelli’s hypersoft tyre made for some very fast lap times in qualifying, with Ricciardo’s pole time of 70 seconds the fastest-ever lap of the Principality.

But the teams were aware from practice that the problem in the race was front tyre graining and that would be the limitation for the race.

Monaco is always a one-stop race, to prioritise track position, but this year it was rather like races on the Pirelli tyres of four or five years ago, where the key was to manage the tyres to a stage where it was safe to stop and be able to reach the finish on the second set.

The worst thing would be to have to stop earlier than ideal and then also take the punishment of having too long a second stint. 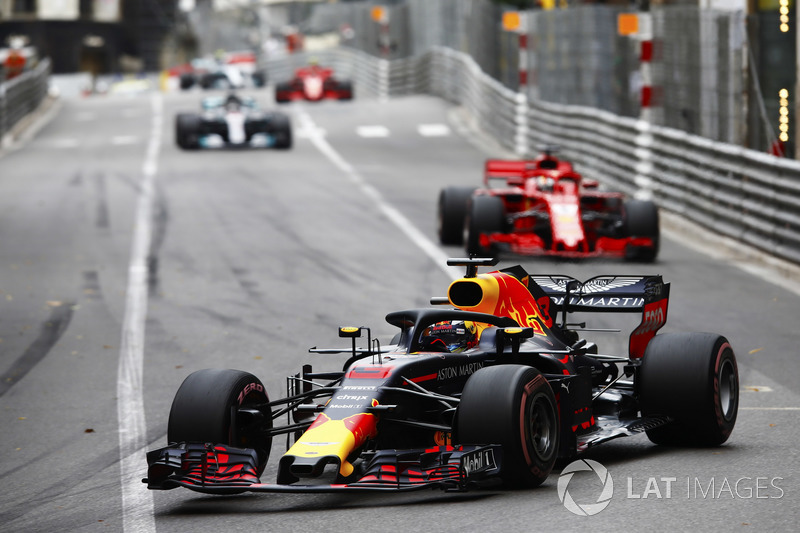 The race at the front

Hamilton was the first to make his stop, on Lap 12, from third place. This led to a reaction from Ferrari and then Red Bull a few laps later, to avoid the undercut. There wasn’t much threat of it; the ultrasoft tyres did not warm up quickly and thus were not particularly fast when new.

The intriguing aspect of Hamilton’s early move was that he did not have enough of a gap to clear Esteban Ocon in the Force India. So, he would have to pass him on the track.

To maximise his chances, Mercedes fitted the ultrasoft tyres, expecting performance. As it turned out Ocon made it very easy for Hamilton to come through. He was not in the same race as him, but we’ve seen much slower cars hold up potential race winners in Monaco when the battle is for position.

Ocon is a Mercedes junior driver and understands how the team operates; that it is all about trying to win the race and score maximum possible points with both cars. No doubt hoping one day soon to be one of the Silver Arrows drivers benefitting from that approach, he wisely moved aside.

Had Mercedes been counting on that attitude from Ocon, they would have fitted a set of supersofts on Hamilton’s car, as they did five laps later with Bottas, who was some way off Hamilton’s pace all weekend. He was somewhat obliged to go this route as he didn’t have a new set of ultrasofts.

Bottas had been out of contention until the supersofts started to perform, which prompted others to look at that approach, as the ultrasofts were not performing. Sauber did the same thing with Ericsson. Some teams split the strategies, to hedge their bets, with one car on each tyre.

With Ricciardo in trouble, there was the question of whether Vettel would pit again and try to attack for the win and whether Hamilton would pit again to try to find more pace.

The gap was there for Vettel potentially to do it at the Virtual Safety Car with five laps to go, Vettel had 11 seconds margin over Hamilton, which would have been just enough, but it would have been extraordinarily brave. Especially as the leaders just missed the initial opportunity; the VSC was deployed just after they passed the pit entry.

So, with the risk that the track could go green at any point, and mindful of how Hamilton was caught out in 2015, discretion was the better part of valour. 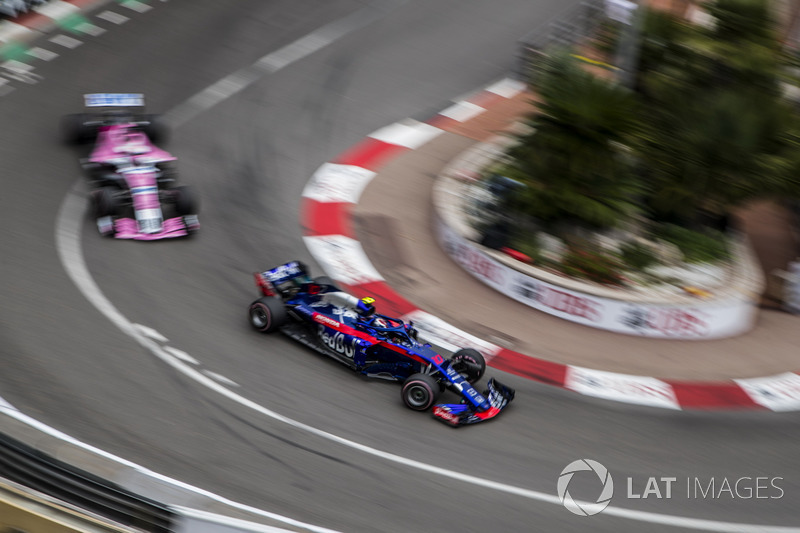 If the finishing order of the top five was the same as on the grid, behind them as always, was a good battle in midfield.

At the end of the first stint Ocon, Fernando Alonso, Carlos Sainz, Sergio Perez and Pierre Gasly were all still in grid order, but Gasly managed to overcut his way up the order, getting 37 laps out of a set of the hypersoft tyres. On paper this was nigh on impossible, but Toro Rosso had a flexible strategy, reacting to the moves of others and when Renault pulled the trigger with Sainz on an early stop, the decision was made to do the opposite.

Gasly pulled it off with aplomb, in another drive that has got him recognised after his breakthrough fourth place in Bahrain.

Once the track became clear after the cars ahead pitted – Perez losing eight places with a stuck wheel at his stop – Gasly was able to find pace and ran in sixth place before his stop. He rejoined behind Alonso, but the Spaniard hit trouble with 35 laps to go and retired, leaving Gasly in seventh place behind Ocon, where he finished.

Sainz had been compromised by that early stop; the team had been concerned about Force India trying the undercut with Perez. So, he lost track position to Gasly.

He was further compromised by being on the ultrasoft tyres, so later in the race he found it hard to defend from Verstappen on fresh tyres behind him, the Dutchman having made a late stop after starting on the ultrasofts from the back of the grid.

Sainz also had to let his teammate Hulkenberg through; the German had also started on the ultrasofts from 11th on the grid and so he represented Renault’s best chance of racing Gasly for seventh place. 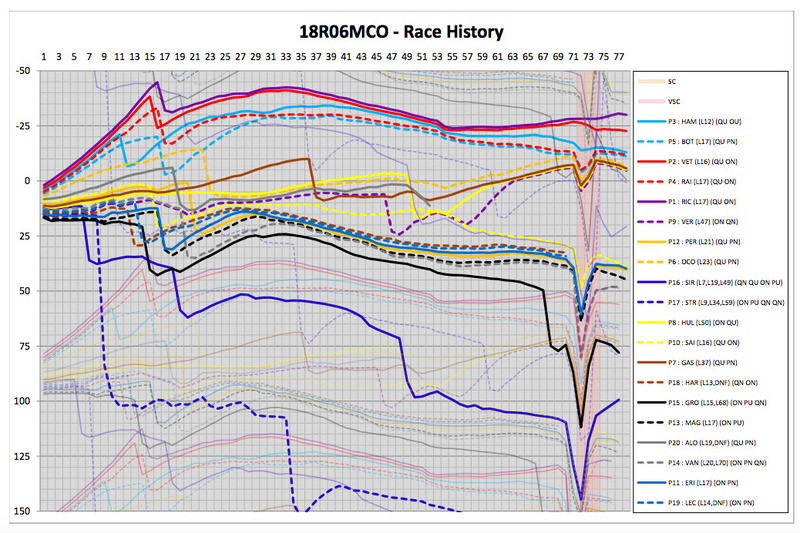 The number of laps is on the horizontal axis; the gap behind the leader is on the vertical axis. A positive sign is an upward curve as the fuel load burns off. A negative sign is the slope declining as the tyre degradation kicks in.

Look at the phenomenal pace of Verstappen following his Lap 47 stop, after he clears the Renaults. On new hypersofts, his performance curve upwards is the steepest of any driver on the day, underlining what a missed opportunity this was for the Dutchman to win the Monaco GP, due to an unforced error in practice. 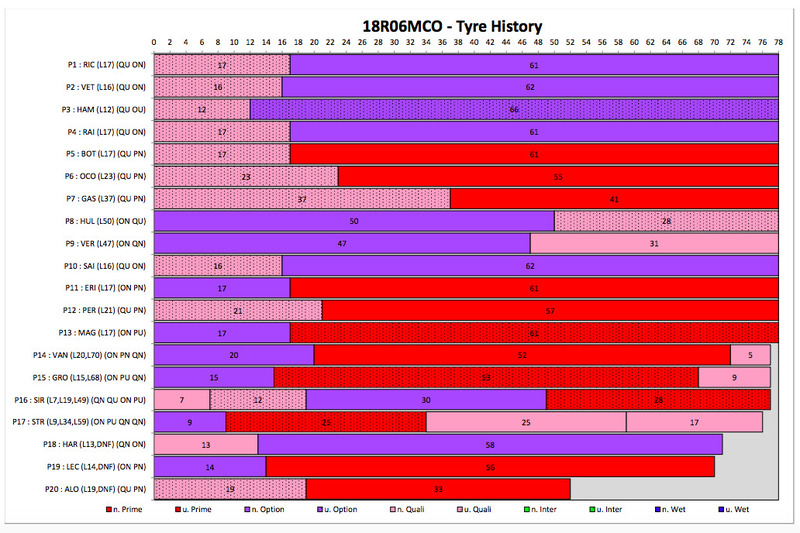 The story behind the Ferrari ERS scandal