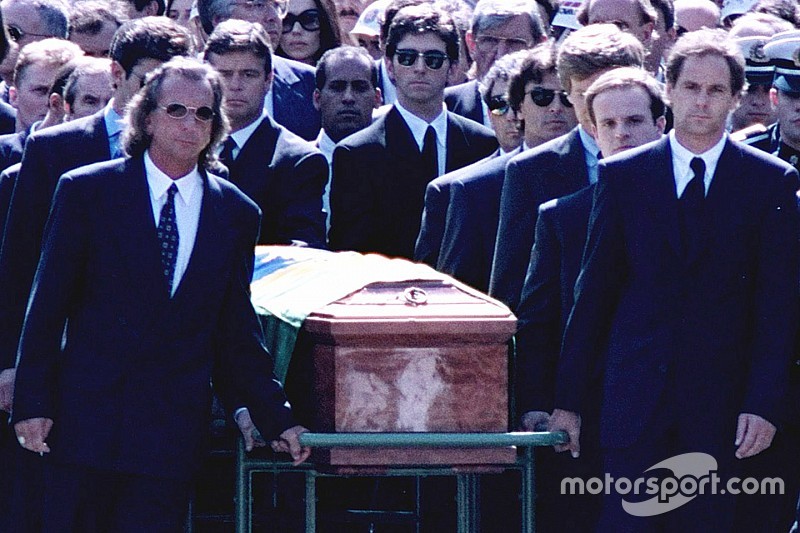 Grand Prix racing legends Sir Jackie Stewart and Alain Prost were originally planned to have been at the front of the ceremony to carry Ayrton Senna’s coffin during his funeral service, claims a new TV series in Brazil.

The first episode about the life and times of three-time Formula 1 World Champion Senna airs in Brazil this weekend, and promises to reveal some intriguing stories over 20 years after his death.

The series, called Ayrton – Pictures and Memories, is directed by Senna biographer Ernesto Rodrigues, who wrote Senna, The Hero Revealed.

He claims that Senna’s coffin was originally to have been carried at the front by three-time champion Stewart and fourt-time champ Prost, but that Ayrton’s PR agent and close confidante, Betise Assumpcao, decided that Emerson Fittipaldi and Gerhard Berger were more fitting.

Stewart and Prost were instead both given pall-bearing positions behind Fittipaldi.

"The ceremony of Senna’s funeral wasn’t done, as far as I know, by his family,” Rodrigues told Motorsport.com. “In the original plan, Prost and Stewart were supposed to be in the first positions carrying Senna’s coffin.

“Betise Assumpcao, his PR, was against this. She said: ‘They are two people that he was not so close.’

“Jackie had an historic argument with Senna after the crash with Prost in Suzuka 1990. About Prost, we had the story that they were getting closer and becoming friends, but of course it was something more diplomatic, not a friendship.

"For Betise, they were rivals all his life inside and outside the track, so there was no point to have this configuration in the funeral.

“She changed the positions, having Emerson, the first Brazilian champion, with Berger, a great friend."

Magnussen: I wasn't ready to give up F1 dream