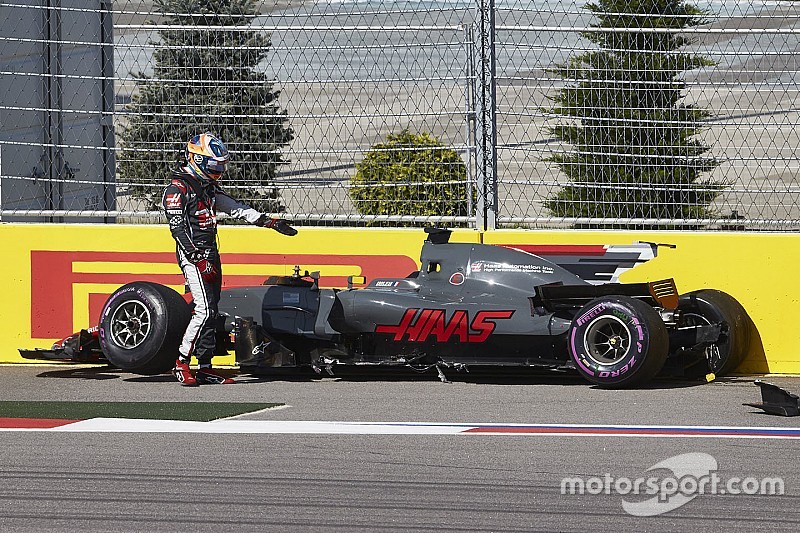 Gunther Steiner says he is "pissed off" with the Haas Formula 1 team's Russian Grand Prix weekend as "everything that can go wrong went wrong".

The American outfit scored points in China and Bahrain but left Sochi empty-handed after Romain Grosjean retired following a collision with Jolyon Palmer while Kevin Magnussen ended up 13th.

Grosjean hit the right-rear of Palmer after bouncing across the kerb of the inside of Turn 2 at the start, and got turfed into the barrier as it spun round into his Haas.

Magnussen was running in the points in 10th early on but lost ground courtesy of a five-second time penalty for exceeding track limits at Turn 2.

"I'm pissed off with the weekend as you get when you have a weekend like this," said Haas team principal Steiner after the race.

"Almost everything that can go wrong went wrong."

Even without Magnussen's penalty, which Steiner agreed with, the Haas team boss conceded it would have been tough to hold on to 10th and score a point.

"I'm not even trying to argue it, we were told and we didn't do it," he said. "You live by your choices. [Without the penalty, points] would have been possible but I don't know - It would have been a tough battle.

"The strategy could have been completely different so it's difficult to know. There was a bigger chance without the penalty."

Five things we learned from the Russian GP