It is Ferrari's new number 1, Fernando Alonso, who is comfortably leading the drivers' standings by 37 points after Monza. 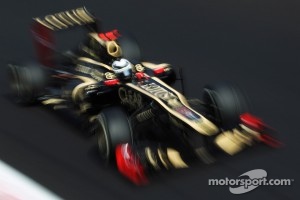 The Spaniard has been on the podium 7 times this year so far, including 3 wins.

But, despite no wins at the wheel of his black and gold Lotus, Finn Raikkonen has had 6 podiums in the same period, and is now third in the standings behind Alonso and Lewis Hamilton.

He was disappointed to finish just fifth at Monza, but also pragmatic.

"Every time you lose points to Alonso it hurts the championship fight," Raikkonen is quoted by Turun Sanomat newspaper.

"But before the race we had hoped for sixth and we went one better, so in that respect we got the maximum performance."

Sections of the international media are saying Raikkonen is the "silent" threat for the 2012 title; Reuters describing his campaign so far as "stealthy".

Actually, the points gap to Alonso blew out by 5 points at Monza, now standing at 38 -- the very same gap between Raikkonen and Alonso as seen at Valencia in June.

"Kimi will probably not win the championship," triple world champion Sir Jackie Stewart said. "But if at the end he is still in the top three, it will be a fantastic result.

"He has done a great job and always takes the points."

Lotus boss Eric Boullier predicts the E20 will look better at the next races.

"We knew Monza would be difficult for us, but the next tracks should suit our car once again.

"Kimi still has the chance for the title, even though it will be really difficult," added the Frenchman.

"We need to pay attention to Hamilton and also not underestimate Raikkonen," he is quoted by Spain's AS newspaper.

El Pais also quotes him as saying: "I respect each of our opponents, but I've always said that Kimi is a very dangerous rival."