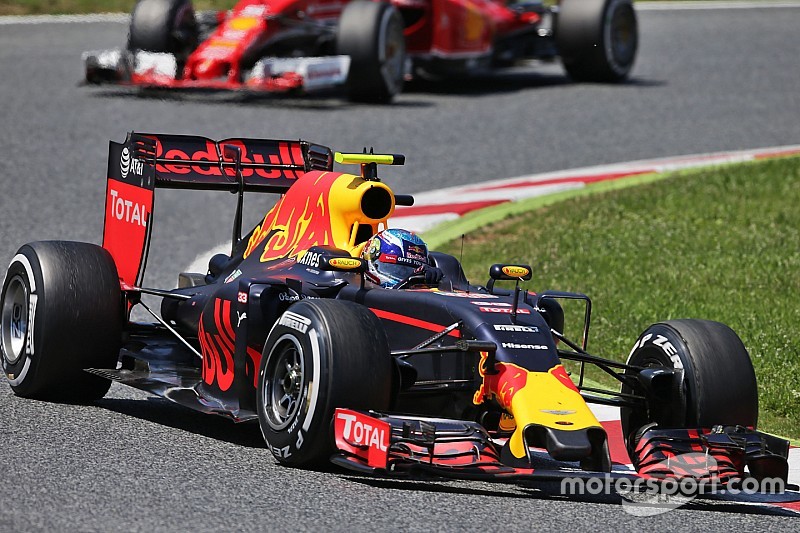 Max Verstappen took a shock win in the Spanish Grand Prix in his first race with Red Bull, the Dutchman putting on a sensational performance after the Mercedes drivers crashed on the opening lap.

Verstappen, making his debut with the leading Red Bull squad after being moved up from Toro Rosso, did not put a foot wrong all day and claimed his maiden F1 victory ahead of Ferrari's Kimi Raikkonen and Sebastian Vettel.

The Dutchman, 18, used a two-stop strategy to emerge in the lead and never looked back, despite Raikkonen's best attempts to pass him.

Vettel had to settle for third position after a three-stop strategy proved to be slower than the leaders' two.

The fight for victory came to life after the opening lap, when Lewis Hamilton and Nico Rosberg crashed into each other and retired right away.

It is the first time since the 2012 US Grand Prix that Mercedes fails to score.

Daniel Ricciardo finished in fourth in the second Red Bull despite suffering a tyre blow-out with two laps to go when fighting with Vettel.

Valtteri Bottas came home in fifth for Williams ahead of local hero Carlos Sainz, who crossed the line in sixth in the Toro Rosso.

All the drivers except Manor's Rio Haryanto started on soft tyres.

Hamilton made a good start, but Rosberg dove around the outside of Turn 1 to take the lead from the Briton.

Hamilton fought back at the exit of the Turn 3 and, having a lot more speed than Rosberg, tried to past the German down the inside ahead of Turn 4.

However, the German closed the door and Hamilton found himself with no room, going on the grass and losing control of his car. He crashed into the back of Rosberg and both retired straight away.

The safety car was deployed while the cars were recovered, with Ricciardo and Verstappen leading the field.

The Australian led at the restart and both him and Verstappen started to open a gap to Sainz, who had moved to up third ahead of Vettel, who finally overtook the Spaniard at the end of the straight on lap 8.

Raikkonen tried on the following lap, but the Finn ran wide at Turn 1 and had to stay behind. On lap 10, however, he made the move stick and moved up to fourth.

Ricciardo pitted on lap 12, leaving Verstappen to lead for one lap before he made his stop to switch to medium tyres as well.

Vettel extended his opening stint with an incredible pace, but Ricciardo started to eat into his lead by lap 15 as the Ferrari driver's tyres began to drop off.

Vettel pitted on lap 16, switching to mediums and rejoining the race nearly six seconds behind Ricciardo, but the German quickly began closing on the Red Bull duo.

By lap 21, the Ferrari driver was less than a second behind Verstappen and trailed Ricciardo by 2.5s.

There was drama for Nico Hulkenberg one lap later, as flames licked from the back of his Force India, forcing him to retire.

As Vettel close right in on Verstappen, the Dutchman appeared to be slightly quicker than his teammate, but neither him nor Vettel were close enough to attempt a pass.

On lap 29, Ricciardo made his second pitstop and confirmed he was on a three-stop strategy by switching back to used soft tyres.

Vettel stopped on lap 20 and followed the same strategy, but his pitstop was slower than Ricciardo's and the gap increased to over four seconds.

That left Verstappen in the lead ahead of Raikkonen, both men stretching their medium tyres in an attempt to stop just twice.

The Finn was quicker than his Red Bull rival, who pitted for new mediums on lap 35. Verstappen returned to the track five seconds behind Ricciardo as Raikkonen stopped on the following lap and copied the Dutchman's strategy.

Vettel made his third pitstop on lap 37, trying to undercut Ricciardo with an early switch to medium tyres after being unable to pass the Australian on track.

That left Ricciardo in the lead with an 11-second gap to Verstappen, but Vettel sped upand went over two seconds faster than the leading Red Bull driver, who stuck with his original strategy.

That meant Ricciardo was lapping in the 1:30s as the chasing trio lapped in the 1:28s.

Ricciardo made his third pitstop on lap 43, put on mediums and rejoined the race in fourth, some four seconds behind Vettel with 23 laps to go.

The fourth retirement of the race came on lap 48, when local hero Fernando Alonso had to park his McLaren, reporting "no power" over the radio when he was running in 12th position.

Raikkonen caught Verstappen with 16 laps left as the top four tried to manage their tyres until the end of the race, but the 18-year-old continued to drive flawlessly and kept the former world champion behind him without too much trouble.

Behind the leading duo, Vettel struggled to catch his teammate and saw Ricciardo close right in.

As the race entered the final eight laps, Raikkonen was right behind Verstappen and Ricciardo right behind Vettel, but the chasing duo began to catch the leading two, setting up a thrilling end to the race.

With seven laps left, Ricciardo dove down the inside of Vettel at Turn 1, but the Australian went wide and the German recovered the position.

An angry Vettel thought his rival had been too aggressive and made it clear on the radio. The incident meant Verstappen and Raikkonen opened the gap to over five seconds with six laps left.

Ricciardo tried again several times, but the Ferrari was too quick down the straight.

With two laps to go, however, the Australian lost his left rear tyre and had to crawl back to the pits. He then rejoined and still managed to finish ahead of Bottas.

Wolff: Too early to apportion blame in Hamilton/Rosberg clash