As always last weekend's Spanish Grand Prix in Barcelona was the prime target for several Formula 1 teams to roll out development upgrades, which has given us more insight into the 2021 development race.

The Spanish Grand Prix is usually the first F1 race where we see teams introduce major upgrades. But, with the calendar having been shifted around for 2021 and a major regulation change looming for 2022, it appears the teams have new priorities and a new approach this season.

Add into the mix the limitations posed by the homologation and token system, plus the impact of new regulations and tyres, and suddenly it appears that for many it’s better to stand still, take stock of the situation and make good on what’s already at their disposal.

However, there were a few interesting new parts on show and a heady mix of teams mixing things up to see how their cars respond.

As can be seen above, Ferrari added a double element T-Wing for the Spanish GP as it looked to improve the car's balance without dramatically increasing the size of the rear wing.

The innovative material, which was made available by Brembo, takes advantage of the work that went into its tender for a single supply that the FIA was set to introduce before being abandoned.

The advantage of this material is that it’s more durable with similar levels of performance and will cost less as a consequence, which is particularly interesting when we consider the budget cap.

Whilst on the topic of Alfa Romeo, it has been making steady progress with the C41 and had an update to its bargeboard cluster for the Portuguese GP. 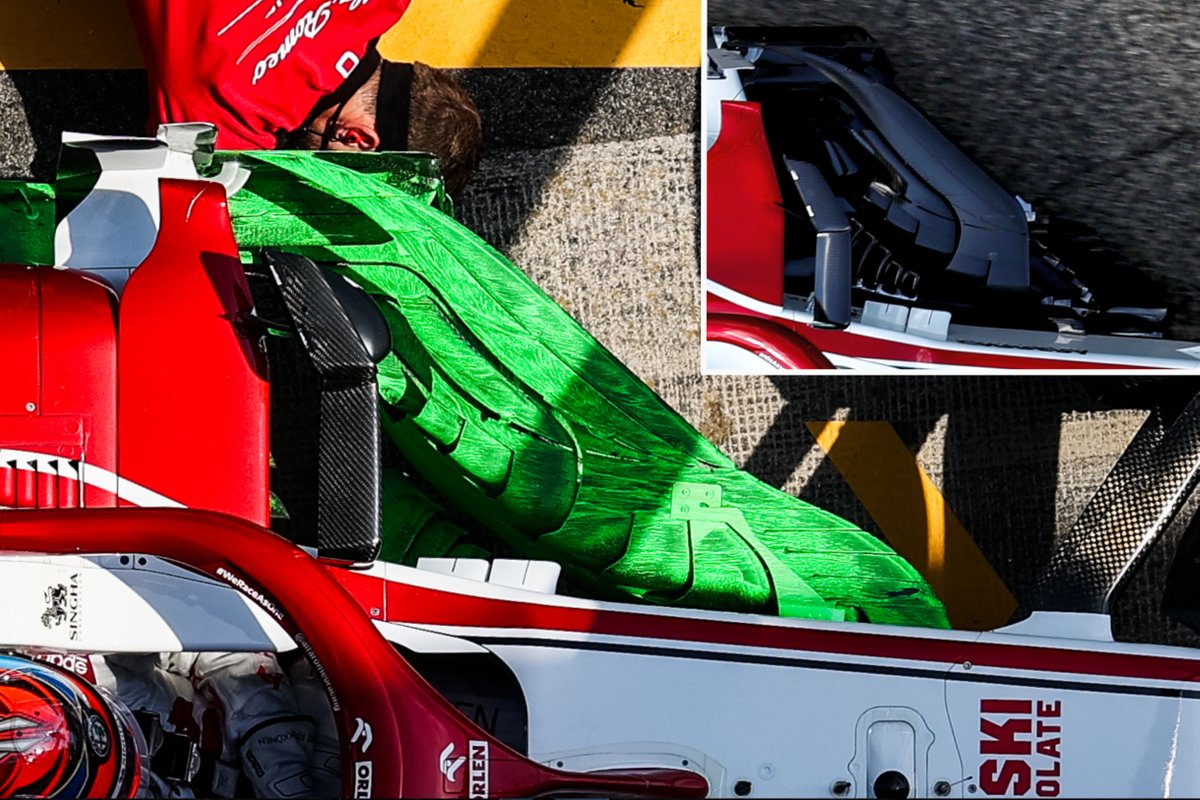 As we can see from the top-down view, the new arrangement has a much larger upper boomerang winglet, with the surface extended forward to mirror the length of the footplate below.

Meanwhile, the elements mounted on top of the footplate have also been tailored to suit the new flow characteristics in that region. 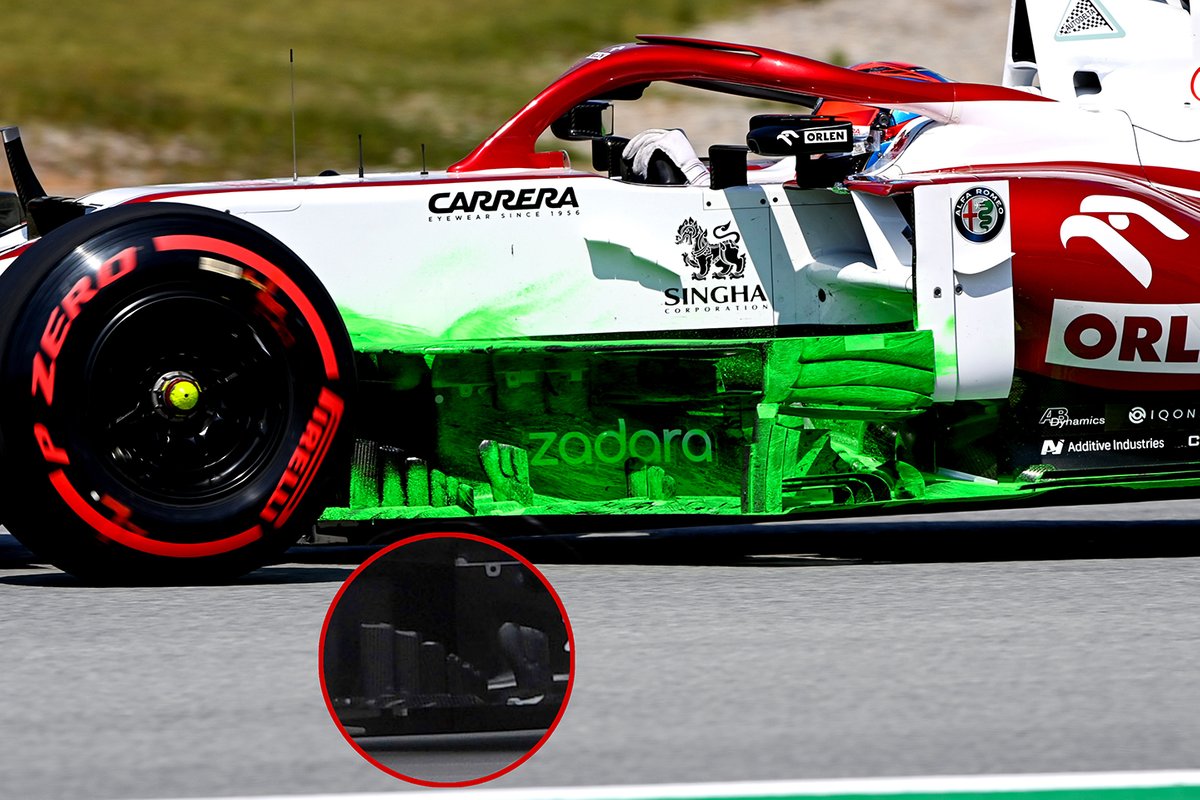 Aston Martin fast-tracked a raft of new parts in order that it could be available for the Portuguese GP.

But this meant that only Lance Stroll had them at his disposal. For the Spanish GP enough parts had been manufactured so that Sebastian Vettel could get a taster for them too.

Whilst a lot of the updates have been covered in detail, one escaped our grasp… 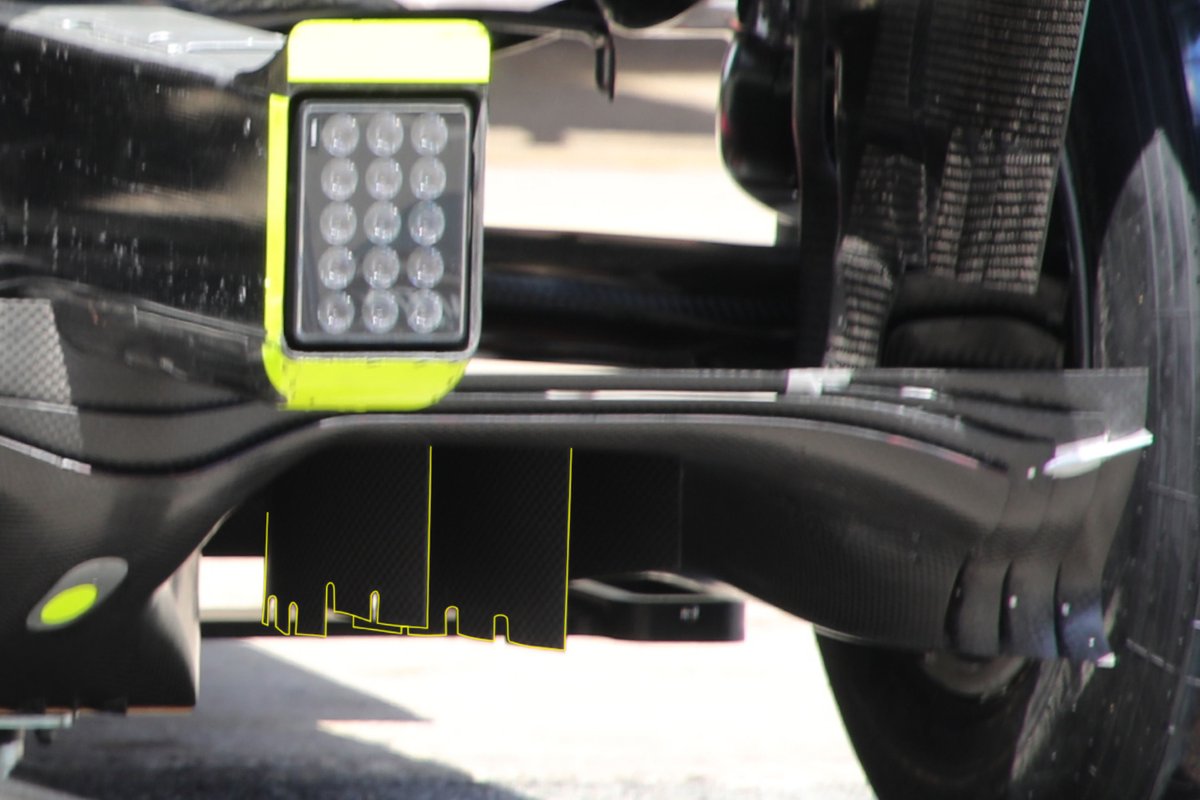 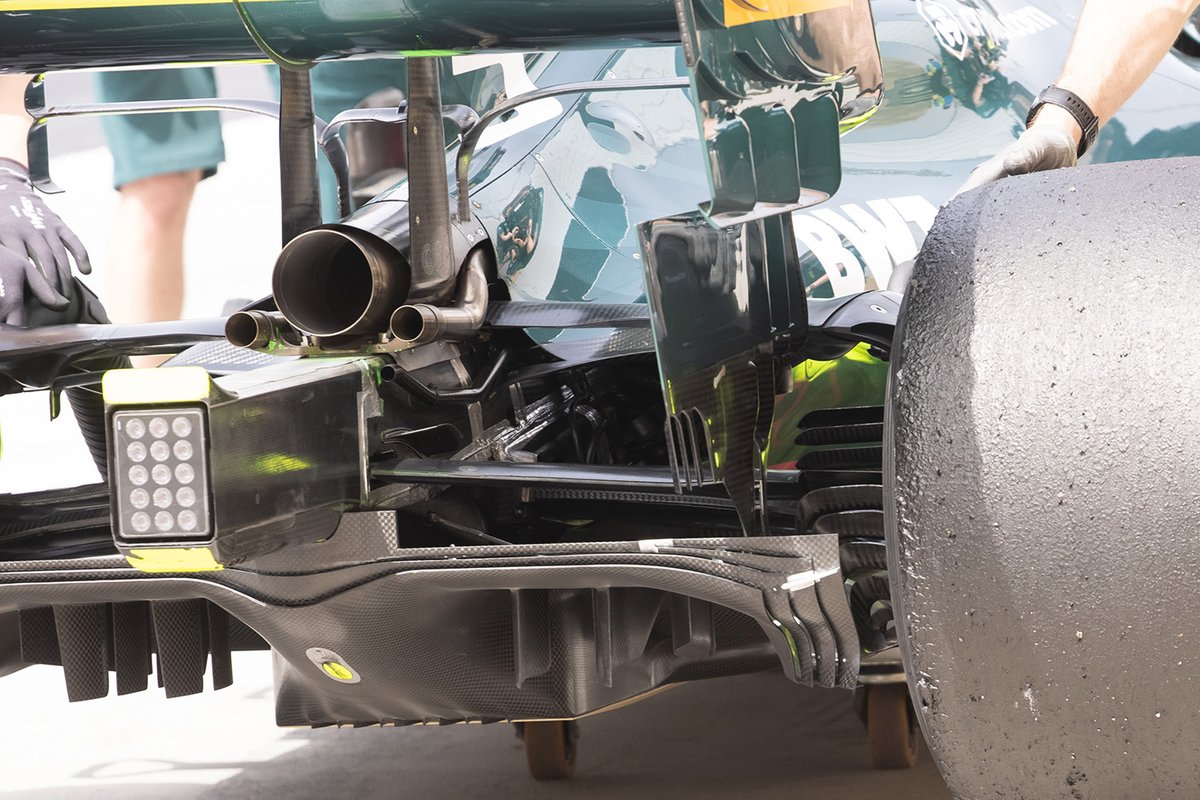 Nestled at the back of the AMR21 was a new strake arrangement for the diffuser, with the team opting to add some feather-like slots to the lower edge, whilst also taking a slice out of the rear lower quarter of the innermost strake.

Alpine is another team that has been focusing its efforts on recovering the losses associated with the rule changes by making changes to its diffuser layout, albeit this is being done in several stages. 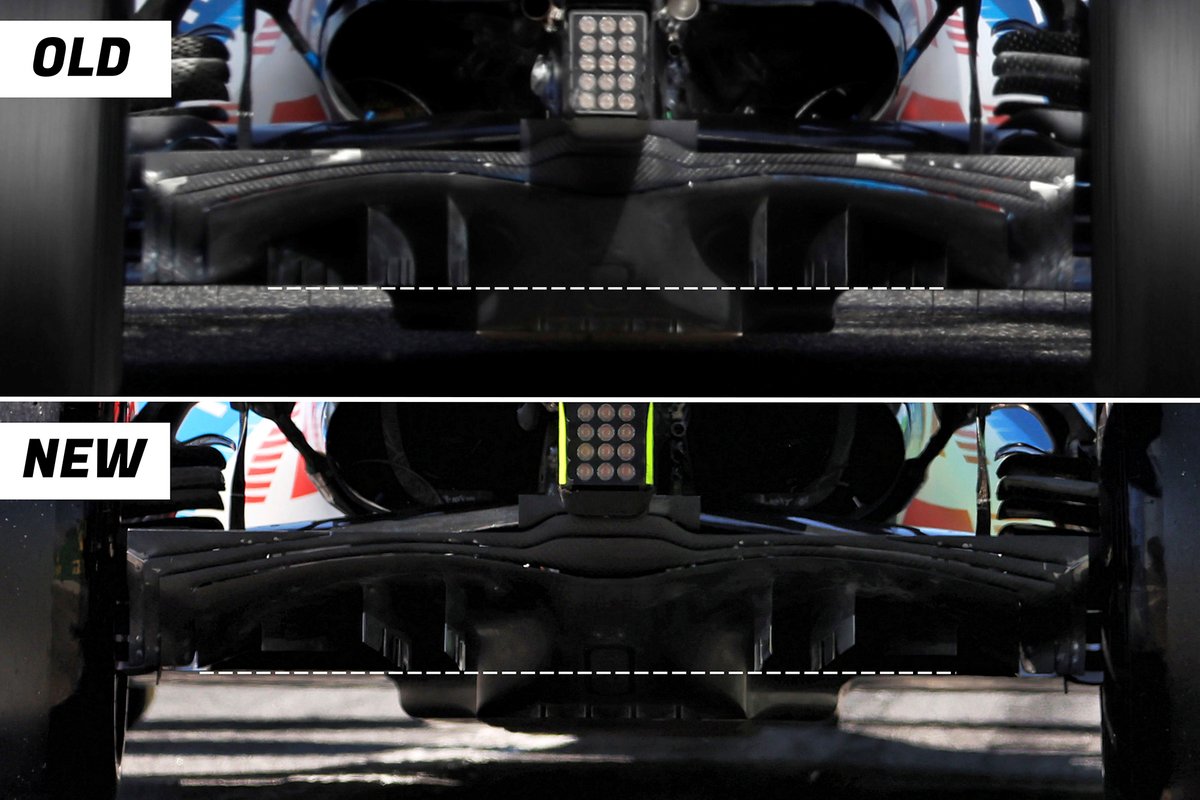 Note the dotted line on both images. This denotes the length limit for the strakes and is where Alpine has decided that full length strakes might not actually give it the most favourable results.

In Portugal, the team reduced the height of the two outermost strakes and then followed this up by cutting a diagonal section out of the inner strakes. 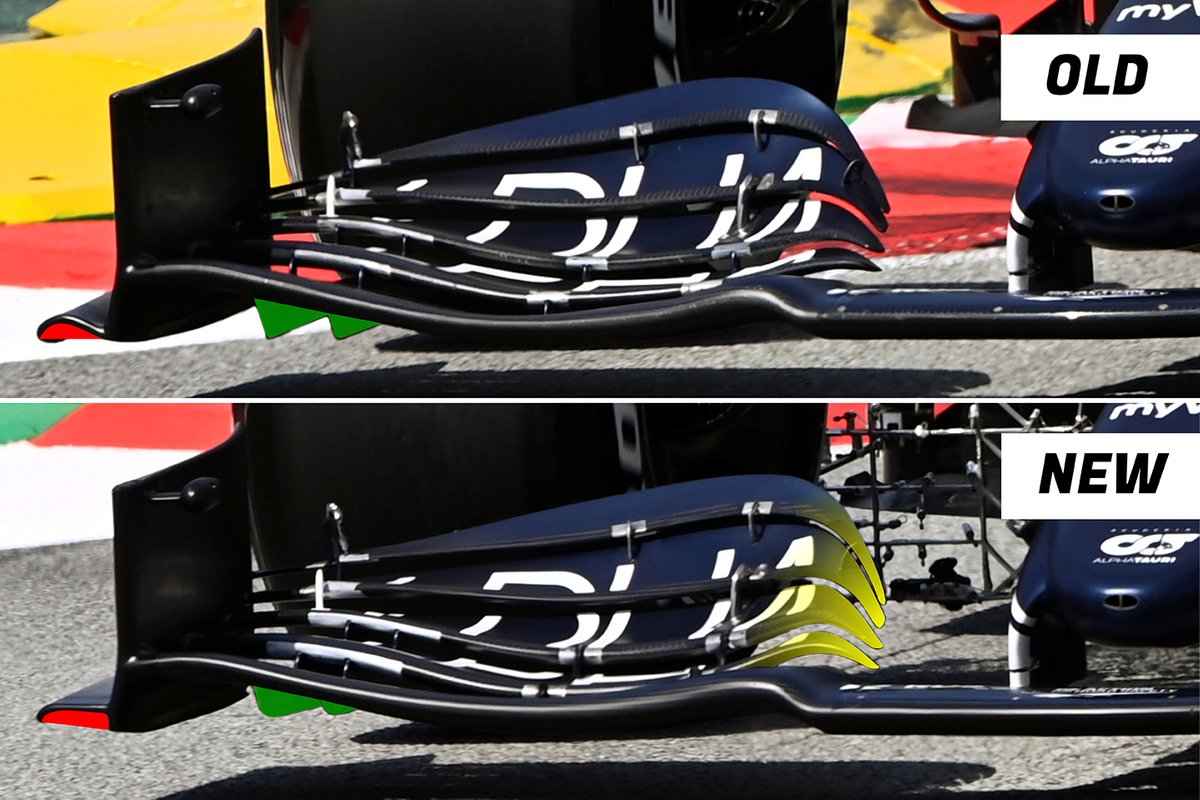 AlphaTauri arrived at the Spanish GP with a new front wing that will undoubtedly change the behaviour of the inner and outermost flow structures.

The shape of the footplate has been altered, with the more traditional arc shape discarded and a flatter, more square design favoured instead (red highlight).

Meanwhile, the shape and height of the strakes mounted to the underside of the wing has been adjusted as the team looks to alter how the airflow passes across and around the front tyre, in order that it has an impact on the turbulent wake created by it.

The shape of the flaps have also been altered, with their tips reprofiled to help govern the shape, velocity and trajectory of the Y250 vortex that’s shed from the surface differential of the mainplane and neutral section below.

These changes are likely part of a desire to tune the car to a more high downforce specific setup, with the team having also installed a monkey seat winglet and double element T-Wing as it looks to help balance the car. 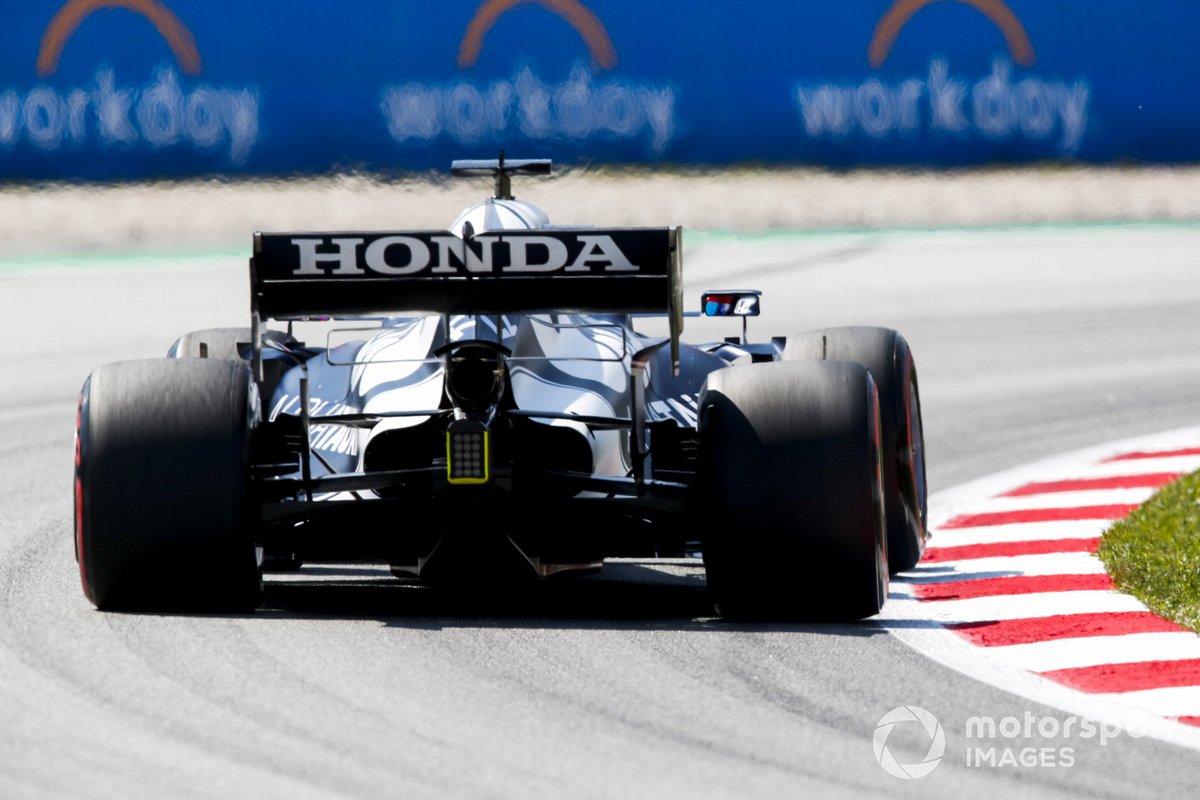 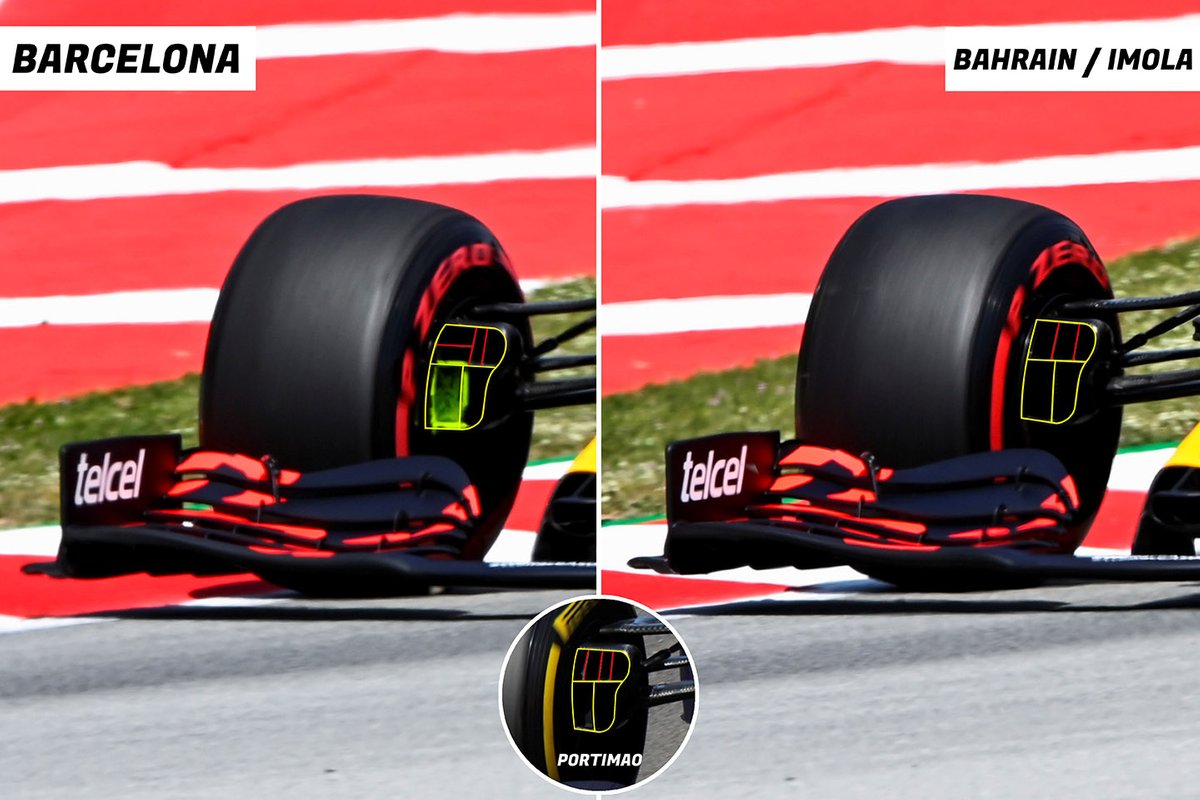 Red Bull has now used three subtly different front brake duct layouts in three consecutive races, as it looks for a balance between brake cooling and the aerodynamic assistance that the assembly provides in shaping the wake turbulence created by the front tyre.

The upper deck within the inlet was divided into three channels for the first two races of the season, whereas in Portugal the team sub-divided this further, dividing the central channel with another horizontal spar.

For the Spanish GP it was all change again, as the outer two spars were retained but the inner one was removed and replaced by a horizontal spar, altering how and where the airflow would be received by the ducting within.

Red Bull had a selection of new parts just a week ago in Portugal, as it focused on refining the central section of its car and optimising the airflow’s characteristics to suit the new tyres that Pirelli has introduced for 2021.

The new tyre construction and profile lends itself to a revised set of airflow parameters, with the wake turbulence that’s shed from the tyre needing a proportionate response in order to get the same, if not more, performance than before. 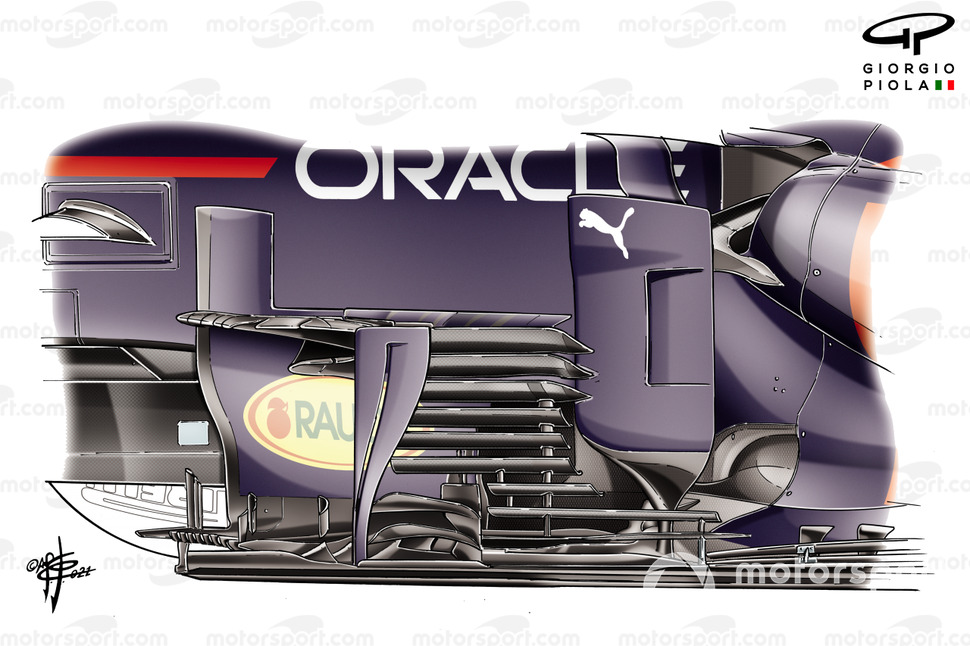 The update was quite extensive, with several aspects of the bargeboard cluster and sidepod deflector array altered.

Starting with the bargeboards, the row of fins that make up the front edge of the footplate has been modified quite extensively, with not only the number of fins increased but also their angle of attack (above).

Meanwhile, the outwardly angled fins atop them have been adjusted too, with the second row made into a trio of fins, rather than just a pair.

The really big and quite noticeable change comes in how Red Bull has optimised its deflector array, with each change resulting in a knock-on effect that has required the whole assembly to be reconfigured.

The forwardmost vertical deflector is now a two-piece affair, with a slot running almost the entire height of the element, whilst it now connects with the front section of the floors axe head, rather than hovering over it and being attached to the outer section of the bargeboard.

This has resulted in the Venetian blind-like slats having to be overhauled too, with the ones connected to the forward deflector lengthened as a consequence.

To work the airflow harder further downstream, changes have also been made to the rearward vertical deflector, as where it previously hung over the floor it is now attached to it.

This has resulted in what was previously the lowermost slat in the Venetian blind panel being extended rearward too, whilst another full length slat has been added beneath.

The pair of detached floor scrolls mounted on the edge of the floor behind this have also been revised, as they now meet with the angled floor strake to create a choke point.