Spanish GP: Rosberg back on top in final practice 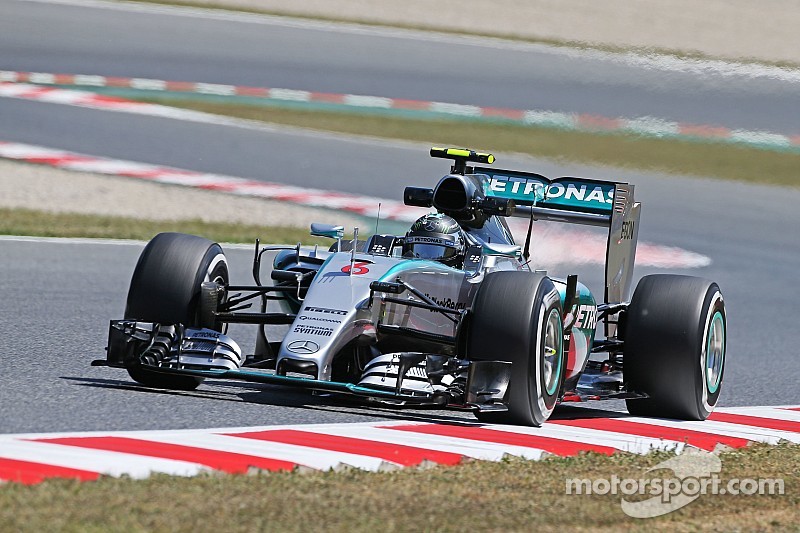 Nico Rosberg returned to the top of the timesheets in final practice for the Spanish Grand Prix, as Sebastian Vettel again split the Mercedes.

Rosberg's best time of 1:26.021 put him just 0.156 seconds ahead of the Ferrari of Vettel, who outpaced world champion Lewis Hamilton, third in the session, two tenths behind his teammate.

Williams' Valtteri Bottas finished in fourth ahead of the second Ferrari of Kimi Raikkonen, who complained his engine had the wrong settings during his final run.

Daniel Ricciardo had a more productive day than yesterday and set the sixth fastest time in the Red Bull.

While Ricciardo hit trouble yesterday, it was teammate's Kvyat's turn today, the Russian's car being worked on right from the start of the session.

Kvyat only took to the track with 20 minutes left on the clock, and with the fourth Renault engine fitted to his car.

Ricciardo was the early pace-setter as he tried to make up for the lack of running on Friday, the Australian getting busy right from the start of the session.

The Ferrari drivers moved to the top of the standings 15 minutes in, with Raikkonen leading Vettel by half a second.

But Ricciardo retook first place over 25 minutes into the session, as he became the first driver to put on the medium tyres. His lap, however, was just some two tenths of a second better than Raikkonen's.

Rosberg and Hamilton, both using the hard tyres, relegated Ricciardo to third place moments later, before the world champion had a big scare at Turn 3.

Hamilton ran wide at the exit of the corner and lost the rear of his Mercedes, but somehow managed to keep the car off the wall and returned to the pits with a set of tyres that he is unlikely to be able to use again.

The medium-tyre runs, which kicked off some 10 minutes from the end, saw Bottas take P1 before Vettel went half a second faster. Seconds later, however Rosberg went quicker, but by less than two tenths of a second.

Hamilton completed his first run on mediums just seconds later, but the Briton had to settle for third position.