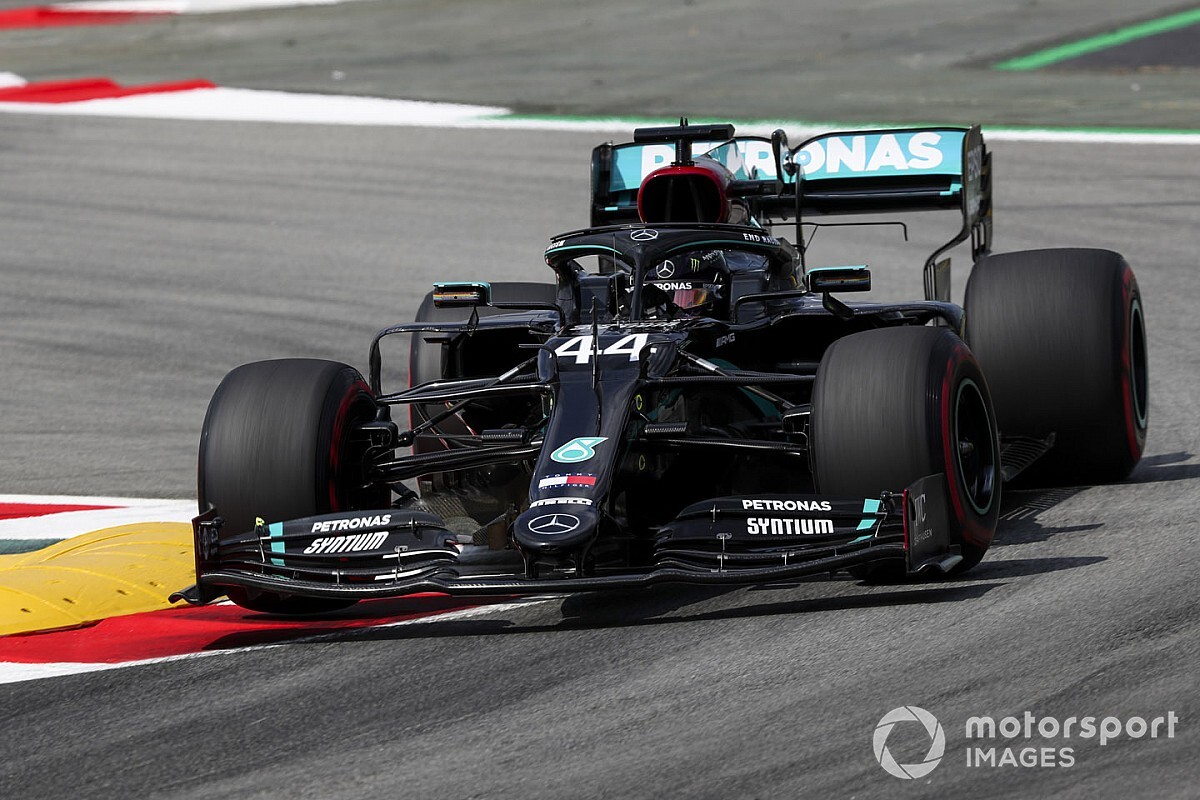 As the track temperature at the Barcelona track increased over 10 degrees compared to FP1, which was topped by Bottas, the Mercedes drivers did not beat their times from the morning session, although Hamilton was able to reverse their positions at the top of the order.

McLaren's Lando Norris set the initial pace at the start of the 90-minute afternoon session with a 1m19.260s, before Ferrari driver Charles improved the P1 benchmark to a 1m19.050s.

Approaching the 20-minute mark, Hamilton took the top spot with a 1m17.960s on the medium tyre as Bottas started his FP2 running on the hards, slotting into second before Verstappen – also on the C1 rubber – bumped him down.

With 30 minutes gone, Bottas emerged from the pits on the soft tyres and used the C3s to go quickest with a 1m17.170s.

As Bottas completed two "cool down" laps before pushing again, Hamilton used his own softs to return to the top spot with a 1m16.883s that remained the best time to the end of the session.

Bottas attempted another flying lap on the softs after his two slow tours, but ended up 0.3s slower than his own personal best, with Hamilton 0.6s down on his fastest time after going again following his own cool down laps.

Daniel Ricciardo popped his Renault into third – echoing his strong practice and qualifying form from last weekend's 70th Anniversary GP at Silverstone – before Verstappen usurped the Australian to wind up 0.8s adrift of Hamilton's time on his own softs.

Ricciardo finished fourth, just ahead of Romain Grosjean, who backed up his sixth place in FP1 with fifth for Haas, but he did have to end his session early after reporting a possible power unit problem during the long run efforts that concluded FP2 as usual.

During that running, Nicholas Latifi (19th in the order ahead of George Russell, who returned to his car after Roy Nissany and driven it in FP1) at one appeared to hold up Daniil Kvyat and the following Sergio Perez at Turn 1.

Bottas also had an off-track moment as he understeered off the track at Turn 12 – the long, slow right-hand in the final sector.

The Finn was able to carry on but did scatter a significant amount of gravel across the track as he scampered clear.

Leclerc ended up sixth for Ferrari, ahead of home hero Carlos Sainz Jr and Perez, who continued his return to F1 action following his COVID-19 quarantine during the two British races with eighth for Racing Point.

Esteban Ocon and Pierre Gasly rounded out the top 10 for Renault and AlphaTauri.

Sebastian Vettel finished 12th in the second Ferrari, ahead of Alex Albon in the other Red Bull.