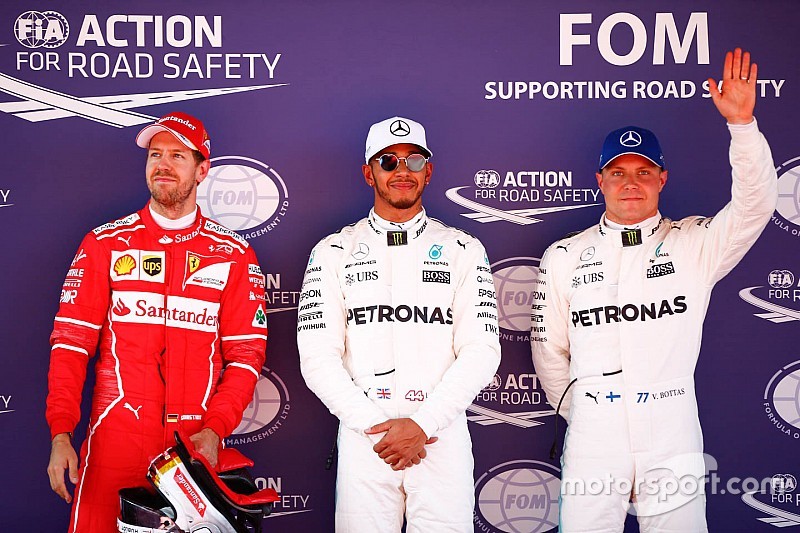 Ferrari had set the pace in final practice at Barcelona’s Catalunya circuit, but Hamilton’s Mercedes held the advantage in qualifying after the first runs in Q3, lapping in a 1m19.149s time that would eventually stand for pole when Hamilton failed to improve on his second run.

Vettel suffered from a de-rating of his Ferrari’s energy recovery systems during his first Q3 run, and was a distant fourth quickest as a result, but he was lapping comfortably faster than Hamilton’s pole time on his final run before locking up at the final chicane.

Vettel eventually cut the timing beam in 1m19.200s, half a tenth down on Hamilton, apologising to his team for the mistake.

Hamilton’s Mercedes teammate Valtteri Bottas was third fastest, recovering from a wild slide exiting the chicane on his first Q3 run to ultimately lap 0.173s slower than Vettel with a small improvement on his second run.

Bottas described his performance as “not good enough”, but it was enough to confine the second Ferrari of Kimi Raikkonen to fourth.

Raikkonen suffered an oversteer moment at Turn 12 on his first Q3 run and lost time in sector two on his final effort.

Max Verstappen was well clear of Daniel Ricciardo in the private battle between Red Bulls to be fifth, while Fernando Alonso produced a superb performance to haul McLaren-Honda into Q3 for the first time this season and qualify seventh fastest.

Force India got both its cars into the top 10 again, sandwiching Felipe Massa’s ninth-placed Williams.

Sergio Perez was eighth and Esteban Ocon 10th, Ocon feeling his lost two tenths after failing to engage DRS at a crucial moment.

Kevin Magnussen missed out on making the top 10 by less than a tenth, while Haas teammate Romain Grosjean wound up down in 14th after losing the rear end of his car and going off at Turn 13 and the chicane on his final Q2 lap.

Carlos Sainz Jr looked in excellent shape through Q1 and the initial runs in Q2, where he was always inside the top 10, but he only found 0.015s on his final Q2 run so ended up 12th.

The Spaniard felt he extracted the maximum from the heavily updated Toro Rosso, finishing just ahead of Nico Hulkenberg’s Renault, which failed to make Q3 for the first time since the season-opening Australian Grand Prix, provoking a sweary response from Hulkenberg on team radio.

Less than a second covered 14 cars in that fight, with Perez’s Force India the only car outside the top six not required to make a second run.

Hulkenberg and Massa also scraped through in this segment, but Kvyat and Vandoorne qualified well adrift of their teammates, with Sainz’s Toro Rosso ninth-fastest in Q1 and Alonso’s McLaren 12th.