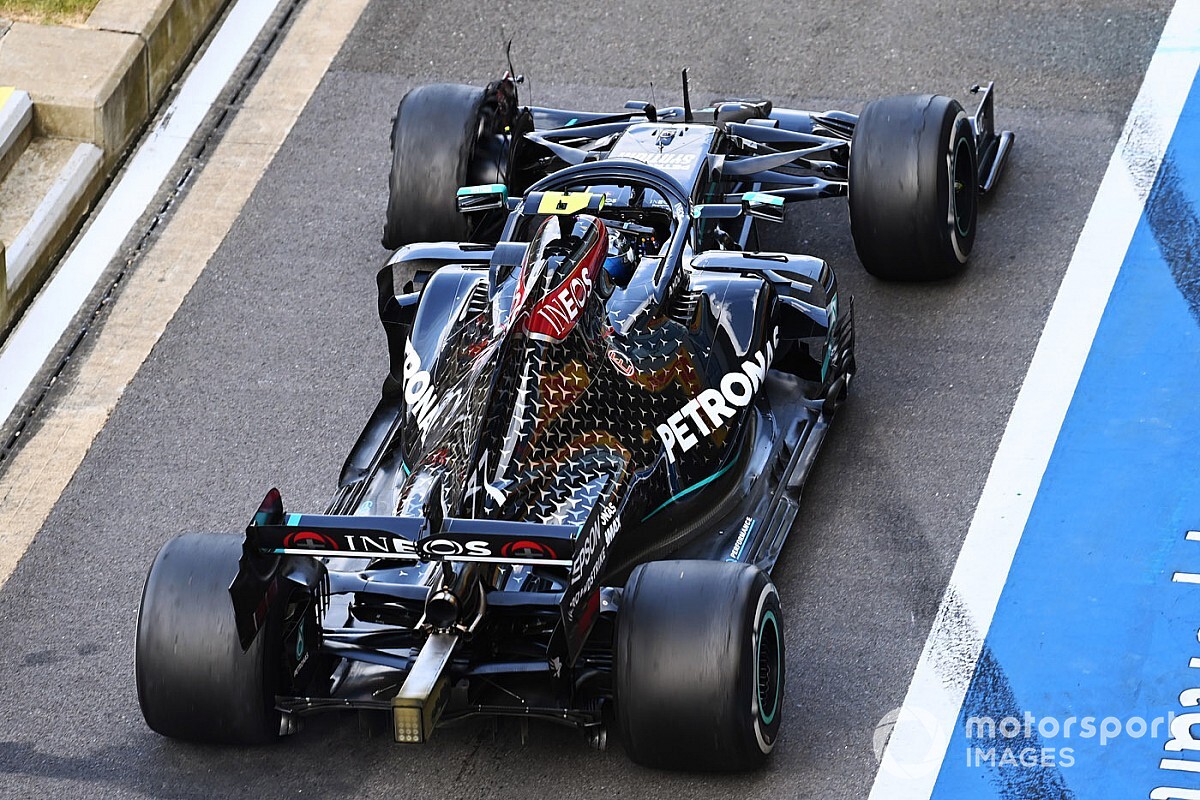 Pirelli Formula 1 boss Mario Isola has downplayed fears about the move to softer tyre compounds for the 70th Anniversary GP at Silverstone following the failures in last weekend’s British GP.

Pirelli’s analysis of the front left failures on the cars of Lewis Hamilton, Valtteri Bottas and Carlos Sainz has confirmed that the unusually long stints run after drivers made early pitstops under the safety car led to the failures.

The Italian company has stuck with the original decision to move to the C2, C3 and C4 range – leaving out the C1s that failed last weekend – but will mandate increased pressures. The minimum front pressure will be up by 2psi, and the rear by 1psi.

Isola insists that softer compounds won’t create any extra risk as the tyre compound did not have an impact on the failures suffered on Sunday.

“The investigation says that the cause of the initial loss of pressure and then the deflation was the level of stress on the tyre, on the construction of the tyre,” he said. “And for that reason the action we are taking for the next race is to increase the pressure, because obviously it is the pressure that is helping the construction.

“And we keep the same compounds, C2, C3 and C4, that have been already decided a few weeks ago. The tread compound is not affecting in any way what happened on the tyres. I don’t want to use the words ‘perfect storm’, because I don’t like it, but the fact that the safety car was out on lap 12, obviously was pushing everybody to change on lap 12. In a normal situation, a normal strategy was to change for cars that were targeting a one stop strategy at lap 18-20.

“Consider also that when you follow a safety car the pressure is going down, and then obviously at the restart of the safety car, there is a period in which the pressure grows. At the restart of the safety car you have a very quick corner, with a lot of energy that is going into the tyre. We usually consider that in our estimation, when we give the prescriptions, we consider all that. And it was confirmed from telemetry data that the level of energy was very, very high.

“So the safety car plus the long stint plus the fact that the construction with less tread is less protected caused an initial loss of pressure, and the loss of pressure leads to a deflation. If you look at the tyres they had both sidewalls still in place in the right position, and the tread ring was broken, that is the typical situation when you run the tyre flat.”

Isola says that the move to softer compounds will automatically force teams to run shorter stints next weekend, with multiple stops expected.

“I believe that because we are going with one step softer compounds the length of the stint will be shorter by definition because the compounds are softer,” he added. “Consider that the medium compound that will be the hard for this weekend, the only one that was running 36 laps was Grosjean, and the tyres were completely finished. So I struggle to believe that they can run more than 30-something laps next weekend.”

Isola confirmed that many cars finished with cuts on their tyres, an issue not related to the Mercedes and McLaren failures. Red Bull boss Christian Horner said on Sunday that the set taken off Max Verstappen’s car at his late stop had multiple cuts, suggesting that the Dutchman’s might have had a failure had he not pitted in his efforts to get fastest lap.

“We had one tyre, if I remember well it was the front left from [Nicholas] Latifi, with a puncture. The tyre was still losing air when he was coming back to parc ferme. I confirm that there was debris on track, I confirm we found some cuts. Also from the tyres used in the first stint, probably from the accident of Kvyat. But I think we came to the conclusion that the cuts were not responsible for what happened to the tyres of Mercedes and Carlos Sainz.

“But to tell you if the cuts on Max’s tyre were big enough to stop him without an additional pit stop is difficult to say.”

Todt: F1 return has set “global example” for other sports