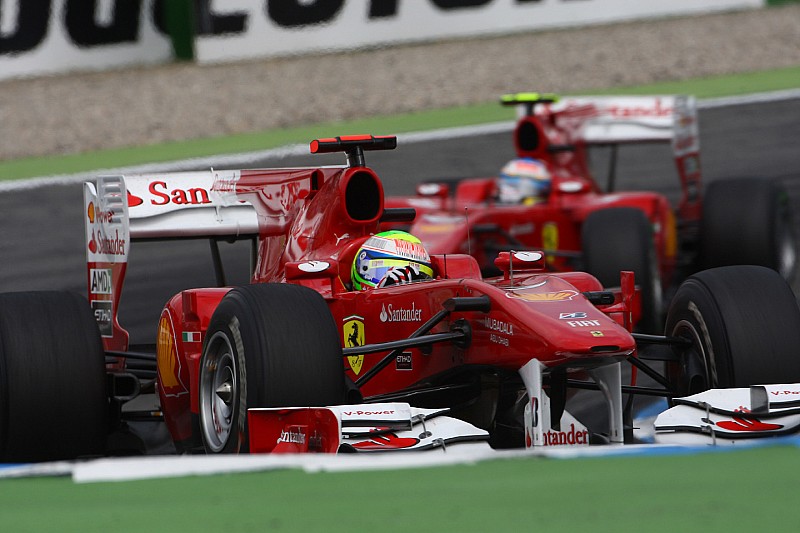 Ferrari's team orders to Felipe Massa during the 2010 German Grand Prix were a "turning point" for the Brazilian's F1 career, according to his former race engineer Rob Smedley.

As then-Ferrari driver Massa led the race from teammate Fernando Alonso, Smedley famously told the Brazilian "Fernando is faster than you" on the radio, suggesting he let the Spaniard through at a time when direct team orders were still banned.

Massa eventually allowed Alonso to pass him, the Spanish driver going on to win the race ahead of his teammate, who was clearly hurt by Ferrari's decision.

Smedley, now working at Williams, revealed in an interview with Motorsport.com that Massa had a tough time at Ferrari after that, having seen where the Italian team's focus was.

"I think he found it difficult from that on," Smedley told Motorsport.com. "Difficult because it was kind of a turning point, and understanding where the team's focus was.

"You know, rightly or wrongly… I'm not saying that the team's focus on Fernando was correct or incorrect. I'm not going to comment on that.

"And I think Fernando is a great driver. I've gone on record many times to say how good Fernando is. So you could argue if that was the right approach, but I think, once Felipe understood that, it was difficult to come back from it."

Smedley did not agree with decision

Smedley, who apologised to Massa on the radio after the Brazilian had given up the lead, insisted he felt it was wrong to ask his driver to let Alonso through.

The Briton said his reluctance to give the order caused him trouble at the Maranello squad afterwards.

"You know I did not agree with it," Smedley said. "I think it was the wrong thing to do, personally.

"And perhaps I made that clear in my radio message, is that I did not agree with it. It'd give me a very hard time at Ferrari after that.

"And it was almost if it was kind of… I think, what Felipe found really difficult to deal with was the fact that it kind of came out of nowhere, you know.

"We had an agreed strategy going into the race. We knew how it was going to play out. And, yeah, it did not quite play out like that… And I think he just found it very confusing in the race. You know he is in that situation, he is racing, he is leading the race. You know, they were pulling away from [Sebastian] Vettel, I think, at the time.

"And I think the difficulty he had with it was the… Why are we doing this? What is the point doing this? You know… It's Germany, we're not towards last race of the season.

"We are midway through the season. What is going on? And that's why I think he found it so difficult to deal with."

Smedley admitted he found it hard to accept that Ferrari had suddenly changed its approach by not allowing Massa to take the victory.

"I think in the end we both probably did the right thing, you know," he said. "I almost sound like I'm not a team player. I played the team game very, very hard at Ferrari.

"It's like if you play football and, you know, if you have the derby of Inter and Milan and one of the Milan players picks up the ball and throws it into the net.

"And you say 'Well, that's not allowed' and the arbiter says 'No, it is. It is allowed now'. You say 'But we didn't know, otherwise we would have picked it up'."

Massa, who was rejoined by Smedley at Williams in 2014, formally announced he was retiring from Formula 1 at the end of the 2016 season.

But there now appears opportunity for the Brazilian to race on in in 2017, should Williams allow Valtteri Bottas' Mercedes move and call up Massa as the Finn's replacement.