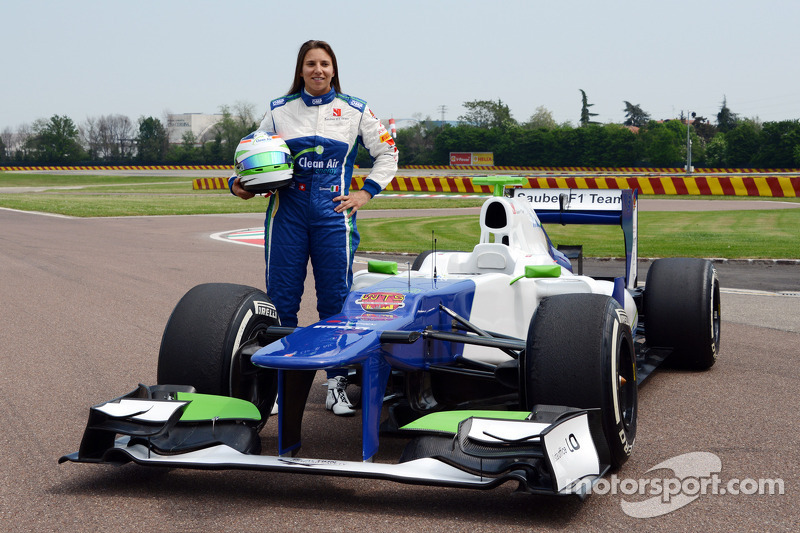 Jun.25 (GMM) Sergey Sirotkin has denied his future at Sauber is being overshadowed by the Swiss female driver Simona de Silvestro.

Funded by her wealthy backers, de Silvestro (in photo) - who also ran at Fiorano in April - returned to track action this week in a 2012 Sauber at the Valencia circuit, Spain's El Mundo Deportivo reports.

Since then, however, Sirotkin's involvement went decidedly quiet.

In fact, it is now rumoured that Sauber's saviour was in fact not Sirotkin's backers, but Bernie Ecclestone, who stepped in and paid all of the team's outstanding debts.

"I cannot do it and I would not do it," the F1 chief executive said in a firm denial to the Swiss newspaper Blick.

At the same time, Sirotkin has admitted he is currently much more focused on his seat in the Formula Renault 3.5 series.

"I have always said that I was giving priority to nothing that could complicate my task or hinder my performance in this championship," he told the Russian website f1news.ru.

"This may give the impression of a lull, but in fact I am in constant contact with the team (Sauber)," Sirotkin insisted.

"Some steps have already been decided, and others I cannot speak about until Sauber makes a statement. In any case, it makes no sense to talk about it because I am fully engaged in the World Series."

Sirotkin's participation in Friday practice before his home Russian Grand Prix was earlier believed to be part of his 2014 programme, but now the driver is not so sure.

"Actually I was supposed to participate in free practice not only in Sochi," he said. "It's an open question.

"Obviously, in terms of marketing, public interest and so on, the logical thing would be Sochi, but I cannot say yet whether it will happen in Sochi or somewhere else."

And what about de Silvestro? While the Sirotkin story has gone quiet, de Silvestro is actively testing, giving the impression Sauber's priorities have moved on.

Sirotkin insisted: "Sauber have a third driver, Giedo van der Garde, there is a test pilot, me, and a mentored driver (de Silvestro), who they are trying to help to reach the level of Formula One."

Referring to de Silvestro's programme, Sirotkin added: "In my opinion, this is more of a marketing ploy, so I don't think I need to be afraid of it.

"Let's see what will happen next."