The start procedure of Formula 1's 2022 Singapore Grand Prix has been delayed after torrential rain hit the island city just over an hour before the race's scheduled beginning.

Heavy clouds had built up over the Marina Bay track shortly after the end of the W Series support race and the skies began to darken as the F1 field completed the drivers' parade aboard a fleet of classic cars.

Spots of rain began falling in the paddock an hour and 20 minutes before the 8pm start time, with team radar systems showing an intense rainstorm was expected to hit at 6.55pm.

It duly did so and quickly turned into a severe thunderstorm, with the end of the track's pit straight no longer visible on circuit TV cameras.

At 7.02 local time, the F1 timing boards displayed the following message from the FIA, which officially delayed the race start.

"Pitlane open and whole start procedure delayed," the message read. "Update in 20 minutes, minimum of 10 minutes notice will be given."

In terms of when the race may begin, Article 44.1 of F1's sporting rules states: "40 minutes before the scheduled start of the formation lap the pit exit will be opened and all cars, including any that are required to start the race from the pit lane, will be permitted to leave the pit lane to cover a reconnaissance lap."

This means once the order to leave the pits has been granted by the FIA, after a 10-minute notice period the 40-minute start procedure period will commence. 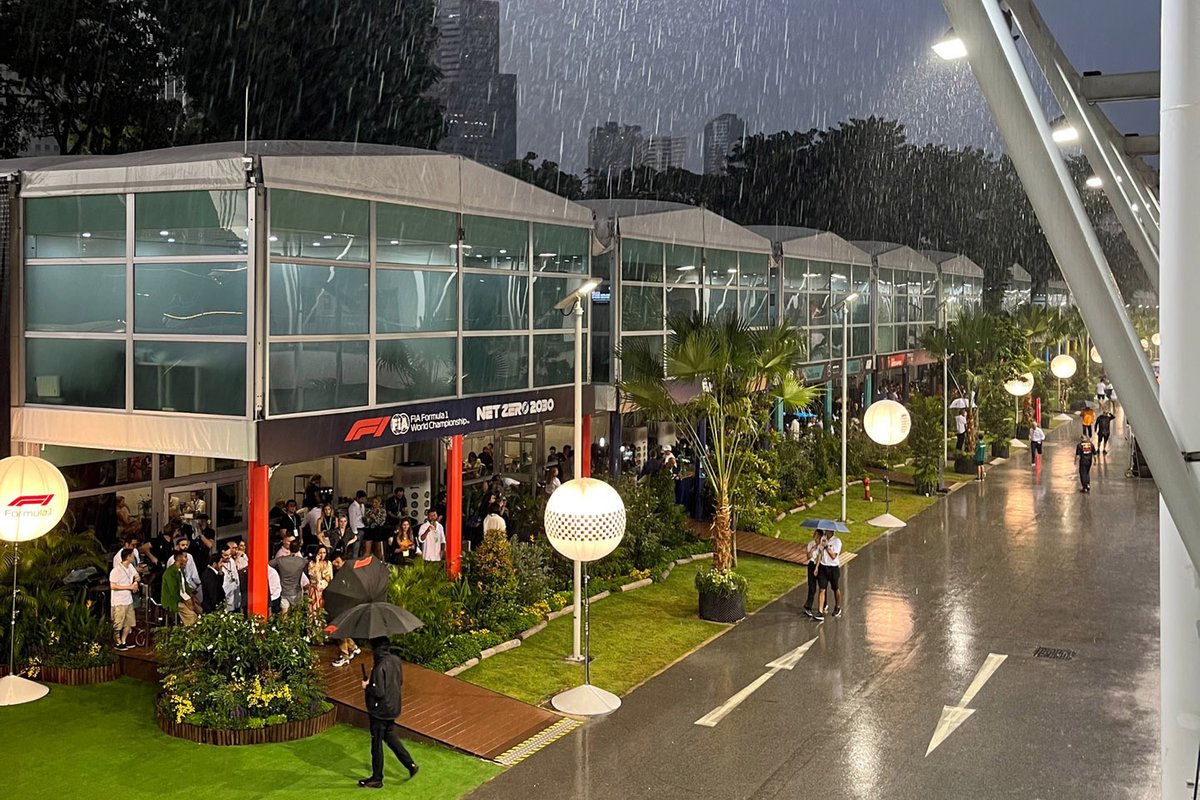 Although the initial expectations were for the storm to quickly blow through Singapore, the wind is carrying the clouds to the south, moving backwards down the length of the pit straight, it endured over the usual time the cars would be preparing to leave their garages to take the pre-race grid.

Flash flood warnings have been issued by Singapore authorities, while a similar rain storm on Saturday left puddles that had not dried for several hours, which meant FP3 was cut from a one-hour duration to 30 minutes and qualifying became a wet-to-dry session where dry tyres were only a viable option for the final Q3 segment.

The usually packed Singapore paddock quickly cleared when the rain began to fall, with the assembled TV crews, event guests, officials and media taking refuge in the team hospitality units and any covered structure.

The wet FP3 and damp qualifying sessions have left the teams with a limited number of new wet and intermediate tyres to use for the race.

AlphaTauri does not have any new intermediates available for either Pierre Gasly or Yuki Tsunoda, while Daniel Ricciardo, Sebastian Vettel, Nicholas Latifi, Alex Albon and Zhou Guanyu have two new sets of inters left, with Ocon and Bottas having three.

All the rest have one set of new inters, with all drivers bar Sergio Perez, Max Verstappen, Charles Leclerc, Fernando Alonso and Esteban Ocon have three new sets of wets to their rivals' remaining two.

Those five were the five drivers that only went out on inters in FP3.

The Singapore F1 GP as it happened