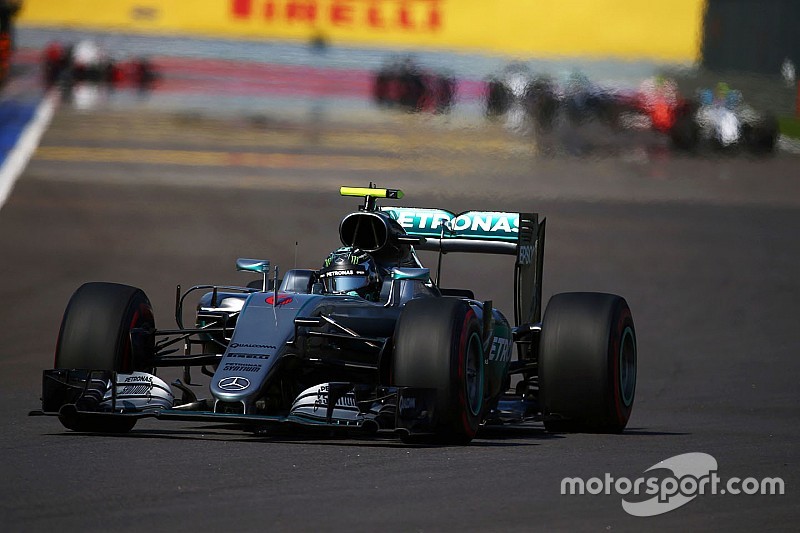 Nico Rosberg took his 18th career victory today - his first at the Sochi Autodrom and fourth of the 2016 season. Lewis Hamilton completed a second Silver Arrows 1-2 finish of the 2016 season in P2 with a battling performance from P10 on the grid.

Nico set the fastest lap of the race - beating the previous best of 1:40.071 (VET, 2015) by just under a second (0.977s). Lewis produced a superbly controlled drive to manage a water pressure problem in the closing stages of the race and retain second position from Räikkönen.

Nico Rosberg : "This weekend really went really perfectly for me. Already in Qualifying I had found a perfect balance and that continued throughout the race, which was fantastic. I had a great start and from there was able to control the pace at the front. Thank you so much to everybody at the factories for building such an amazing car. If you have a car like this, you are really able to push to the limits and that's an awesome feeling. Lewis drove really well to come back up to second so quickly, so well done to him too.

The only down side to the weekend was to see that reliability is becoming a bit of a concern, as Lewis obviously has a problem yesterday and both cars had issues during the race today. But we have a great team behind us and I'm fully confident that we will sort this out. It´s unbelievable to go into the European races with four wins and I really look forward to Barcelona now. Thanks, Russia - you were very good to me!"

Lewis Hamilton: "Firstly, I would like to that the guys who came together to get the new parts over here from the factory last night - and then to the mechanics who worked all through the night to get everything prepared for me to go out there and race today. The guys on my side of the garage are having a really hard time of it at the moment - but I have every faith and confidence in them. We've swapped things round in the garage a bit this season but that is absolutely not the reason we've been having issues. It hasn't been the case for the past three years and I have no reason to believe it would be now. Without their hard work I wouldn't even have got to this point, so a big thank you to them once again.

The first corner was pretty hectic. I don't know what happened - but I saw something happening in the corner of my eye and just thought "I'm not getting caught again!" I managed to get out of the way and avoid it - but if I'd turned in I would have collected them. It was pure instinct and I'm glad I was able to come out without any contact this time. From there I had good pace and I felt like I could challenge for the win - but then there was the water pressure problem which ended that chance. It was tough to hang on at the end but I handled it as best I could. I had to really nurse the car home and I'm just relieved to have made it to the flag after how this weekend has been. I've got a long way to go yet this season with not many healthy engine parts left, so we need to do a better job on reliability."

Toto Wolff, Head of Mercedes-Benz Motorsport: "That race was anything but plain sailing today - it was a pretty stressful experience to get both cars home, and there was a point when we thought neither of them might make it to the flag. First of all, congratulations to Nico, he did a perfect job all weekend and controlled the race from the front once again. He didn't put a foot wrong and, when we faced an issue on the MGU-K during the middle part of the race, he was able to do all the necessary steps to keep it under control and bring it home.

As for Lewis, he drove brilliantly. Some really good, aggressive passing manoeuvres and clever racing brought him to P2 - and he was just getting his head down to charge when we saw a water leak and he was losing water pressure. The only thing to do was ask him to back off to bring the car home and fortunately that meant the situation stabilised but cost him the chance of racing Nico. No doubt he will be thinking about what could have been today - but it was a fantastic recovery after such a tough moment in qualifying yesterday.

A one-two finish is always something special and to be savoured, especially with the performance advantage we enjoyed this weekend. We are pushing hard this year and finding the limits of our car - but we need to get on top of our issues so the drivers can battle it out on track themselves. That's what we all want to see and what we will be working hard to achieve in the coming days before Barcelona.

Paddy Lowe, Executive Director (Technical): "Coming into the race, the team did a fantastic job to get Lewis' car back into shape for the race in the right specification and preserving his tenth place on the grid under parc ferme restrictions. It was quite a dramatic start, from which our drivers fortunately emerged unscathed. The result, in fact, worked in their favour, with Nico comfortable at the front and Lewis moving up to fifth. After the re-start, Lewis made some fantastic overtaking moves on Massa and Räikkönen, then once again on Bottas following the first round of stops.

This proved critical to his result. After Nico's stop, his car developed an MGU-K problem which we were able to manage to some extent but remained a concern to the end of the race. Then, shortly afterwards, Lewis' water pressure started to progressively drop. We encouraged him to ease off, which helped to a degree. But, in reality, this appeared to be a terminal situation and we were sitting for about 20 laps with our fingers crossed hoping the car would make it to the flag.

By some miracle it did just that, which came as a huge relief after the difficulties of the weekend. Overall, it's great to get another one-two finish. But it's clear that we have more work to do in the days leading up to the next race to understand the series of problems experienced over the past two weekends."