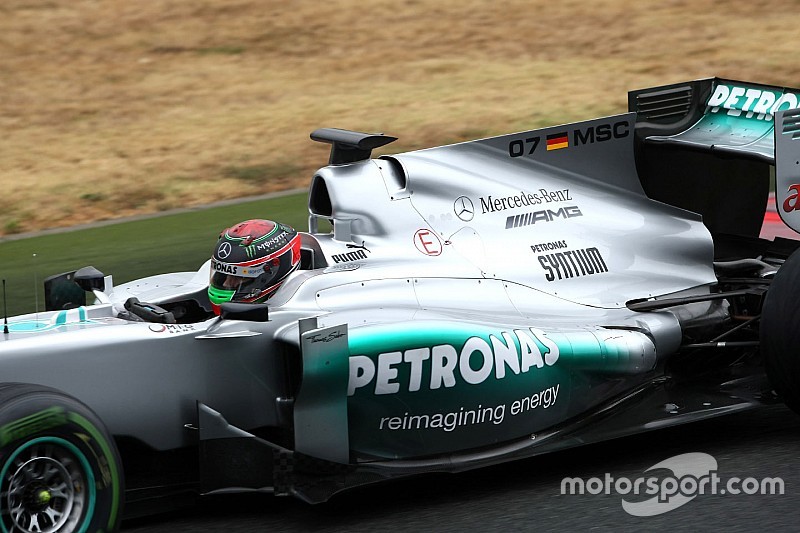 Ross Brawn says Formula 1’s reluctance to ditch shark fins is especially frustrating given that teams didn’t want them several years ago, when there was a push to use them for displaying car numbers.

F1’s new managing director of motorsport has made no secret of the fact that he does not like the shark fins and T-wings that have appeared on cars this year.

However, he is well aware that the sport’s governance structure means that now only unanimous support from teams will be enough to get rid of them, unless the FIA can cite safety grounds.

Speaking about the situation, Brawn says that the arrival of shark fins is proof that F1 moves in ways that are often not in the best interests of the sport.

He recalls a resistance from teams about the use of shark fins back in 2012, when FIA president Jean Todt wanted them to show off car numbers.

“Part of the sales pitch for these new rules was nicer-looking cars,” Brawn told Motorsport.com in an interview discussing his new role.

“We’ve only half achieved that, haven’t we, because we’ve got all these oddities – shark fins and t-wings and more bits surrounding the turning vanes than I’ve seen for a long time.

“That’s OK, that’s understandable with a new set of rules, but the next iteration has got to make sure that we don’t – even if it’s only for aesthetics.

“You know, the frustrating thing is that Jean Todt has had this bee in his bonnet, which is valid in a way, to put the number on the side of the car so that the fan in the grandstand can see what car he’s looking at. Because not every fan is knowledgeable enough to recognise the helmet and all the rest of it.

“We came up with the shark fin [idea for that], because the shark fin was the easy addition to put a big number on. And half of the teams said 'we’re not going to have that on our cars, that’s terrible'.

"It was tested. We had photographs and everything, and everyone said, 'that’s horrible, we don’t want that.' ”

With Liberty Media mapping out its plans to change F1 for the better, Brawn is hopeful that teams are open to ideas put forward to them.

He is well aware that breaking down the self-interest of teams will be tough, but reckons it won't be impossible.

“There’s no switch you can turn, it’s just people hopefully understanding that we have that interest in the sport at heart," he said.

“But let’s not be naive, Liberty Media want to make money out of Formula 1. They are not in it for charitable reasons. But they believe that the sport can be much better and much bigger with investment and with time. So the philosophy is different.

“They are into building businesses. And if you look at their history, a lot of the businesses they’ve had they’ve had for a decent amount of time.

"They put an operating team in, and support that team and give it the opportunity to grow from internal or external investment. So I hope people will recognise that our motives are just to improve Formula 1. We have got no other motives.

“And as long as we don’t fall in the trap of trying to distort the competition because somebody is winning, which I would never want to do, then people shouldn’t have a need to question our motives.

"They might disagree with what we want to do but they shouldn’t question our motives, which is purely to make Formula 1 more successful, more entertaining, more appealing and more commercially successful, because that goes hand in hand.”

All Mercedes teams to use latest engine in Australia