The 1985 San Marino Grand Prix is part of Formula 1 folklore, with three different leaders in the last five laps – none of whom actually won!

Imola was renowned for being tough on fuel consumption, and this was proved a year earlier when Elio de Angelis was one of three cars to run dry, although he still managed to salvage a podium finish. This year, he was determined to play a cannier game.

His Lotus-Renault teammate was the great Ayrton Senna, who was fresh off his fantastic first Grand Prix victory, at a rain-soaked Estoril circuit. Senna was buoyant, and declared: “My car is good, there has been an improvement since Portugal.” He had suffered heartbreak at Imola 12 months earlier, the ’84 San Marino GP being the only race he ever failed to qualify for, due to a tyre dispute between his team and Pirelli, and an engine problem when it mattered. 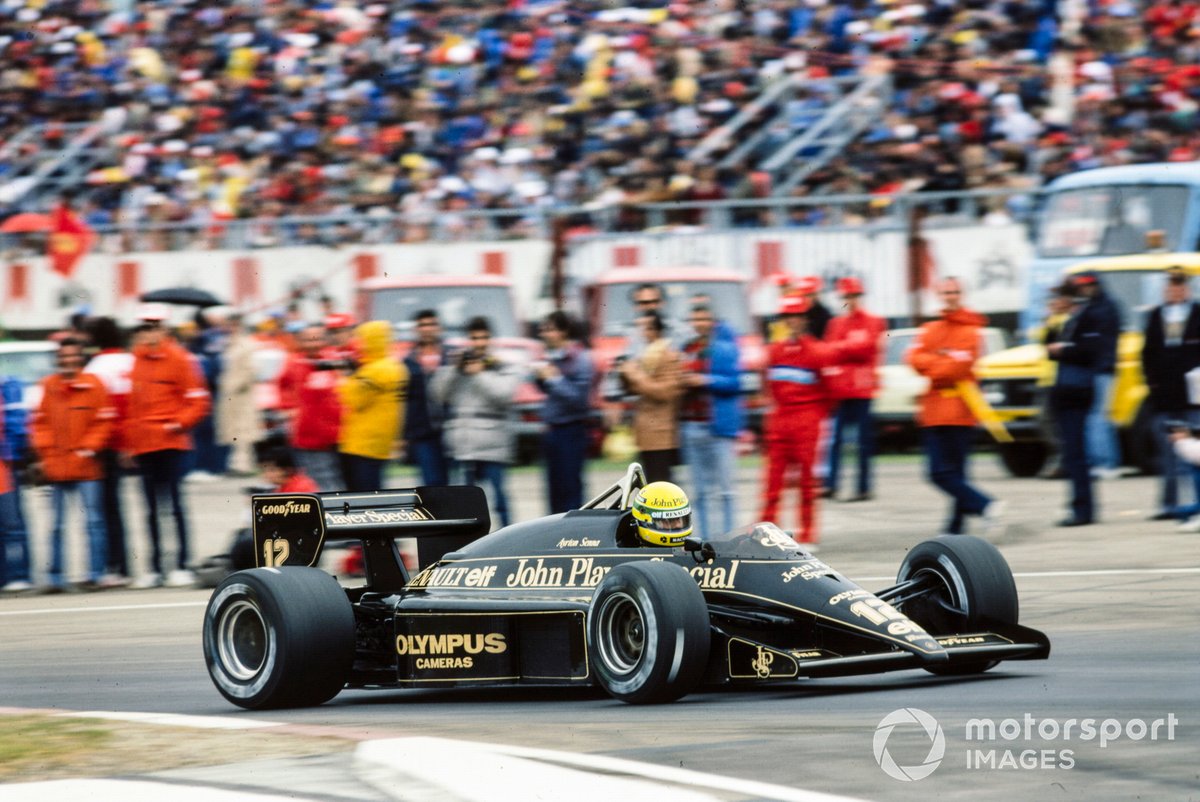 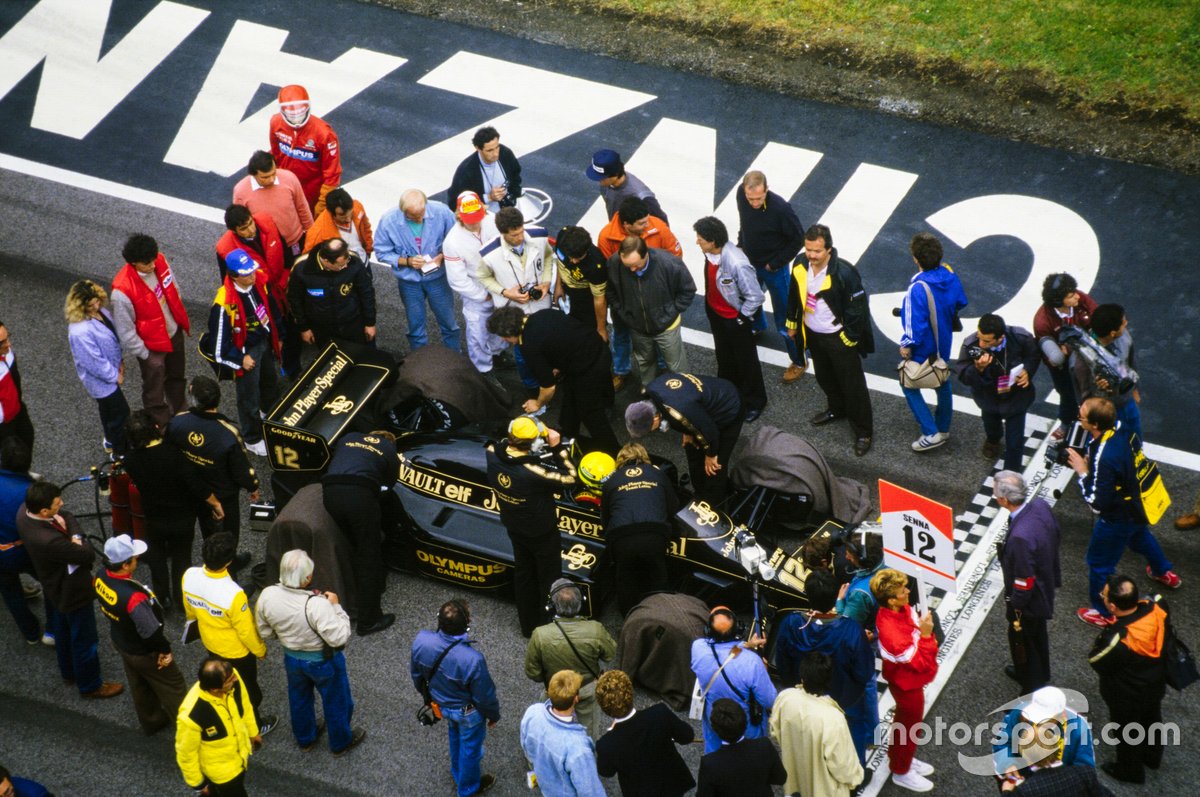 Senna topped both days of qualifying in ’85 to claim pole position, by a mere 0.027s quicker than the Williams-Honda of Keke Rosberg, but warned: “Pole isn't so important here at Imola than at some other tracks. It will be a long hard race; hard on brakes and fuel consumption.” 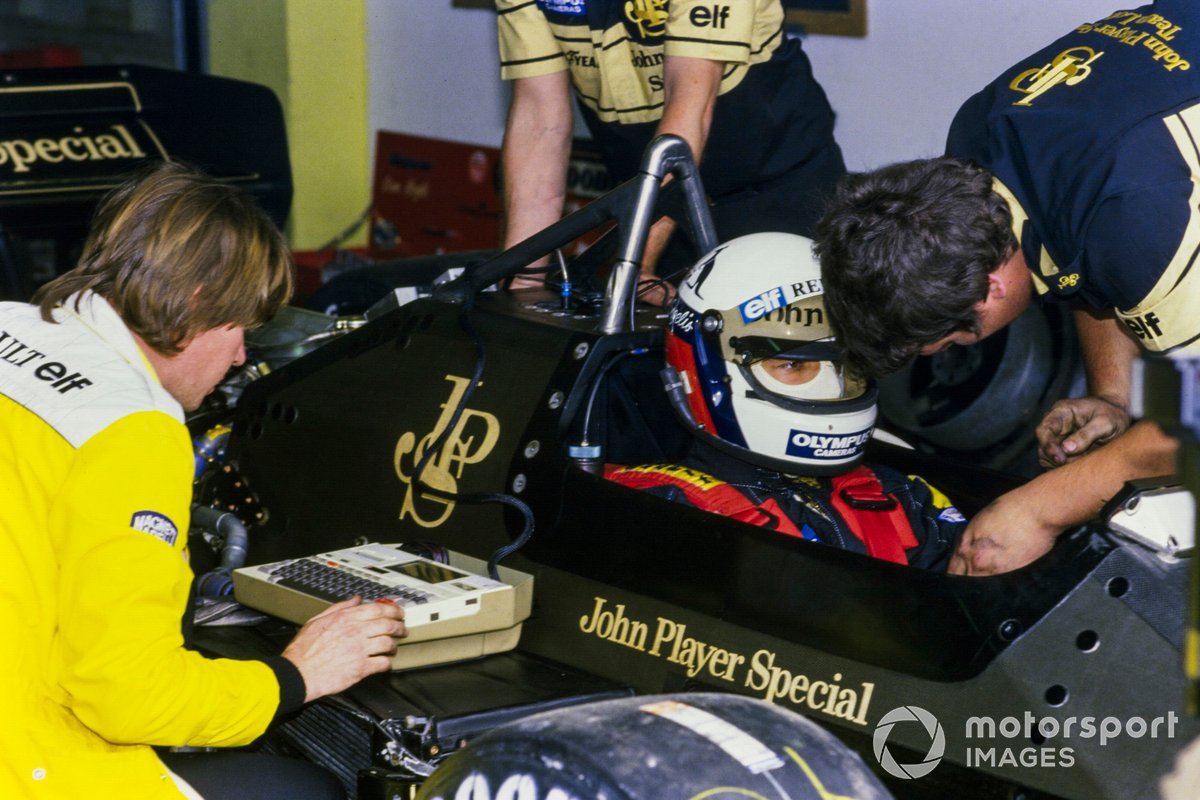 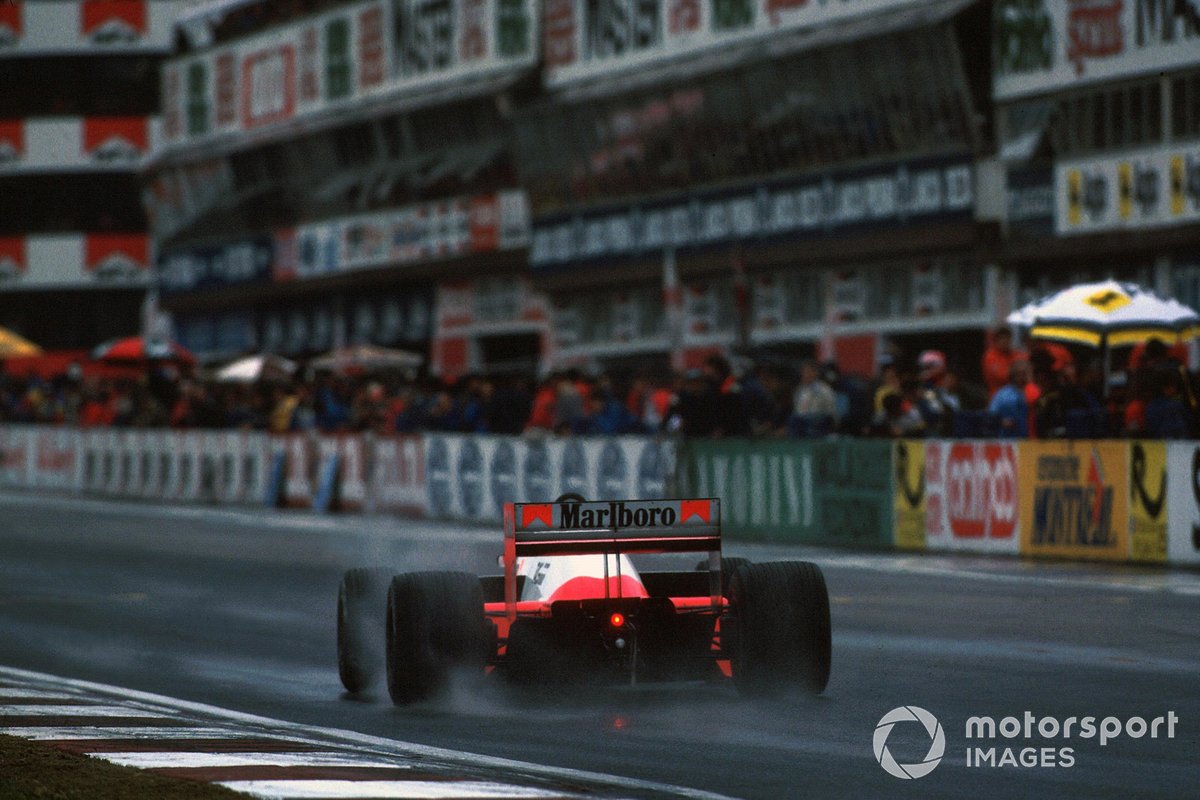 The Formula 1 rules of the day were for 1.5-litre turbocharged engines that had the capacity to be the most powerful – and most thirsty – the sport has ever seen. There was a strict fuel limit of 220 litres, however, so teams had to factor their gas useage into race strategy.

Warm-up at Imola had been held in wet conditions, which had compromised the teams’ running in race specifications, so the Grand Prix would be a venture into the unknown for all involved. 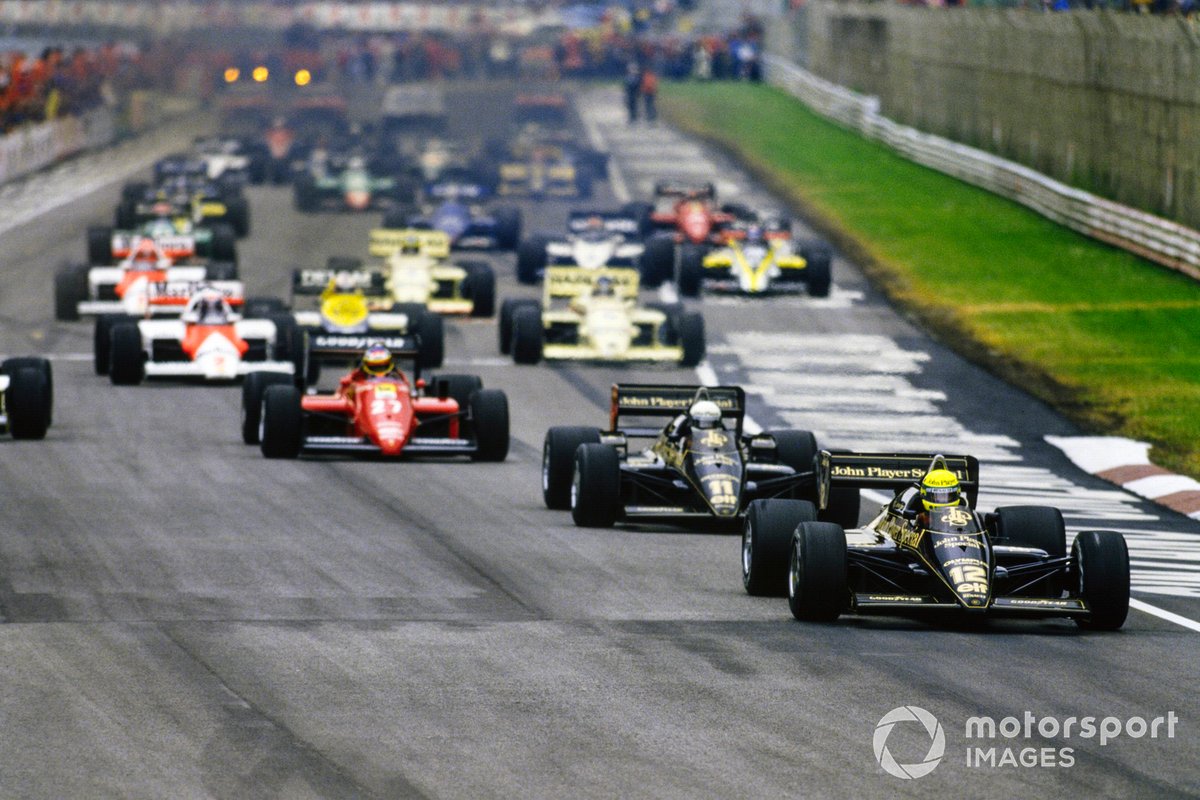 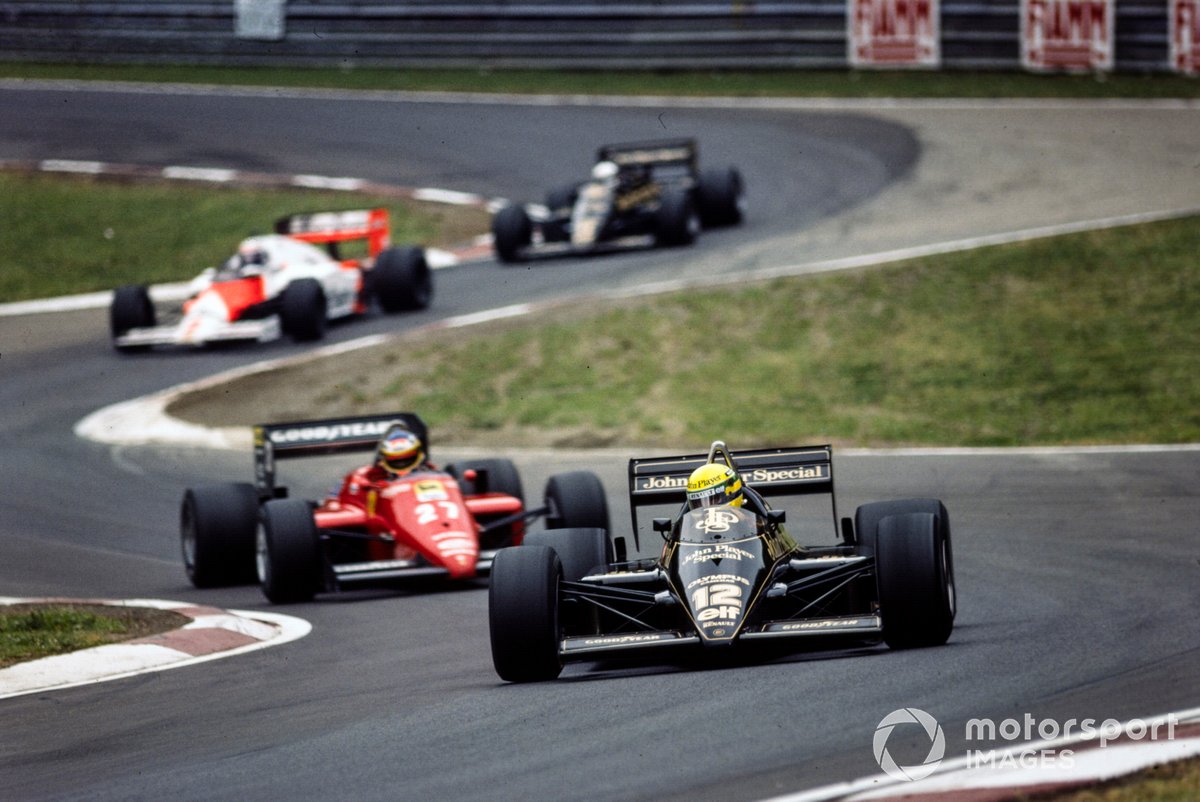 Senna darted off into the lead on raceday, setting a high tempo for the others to follow. Indeed, he dominated the race, despite a mid-race attack from Prost, and was over 10s clear in the lead when his car began to suffer fuel starvation, and he was forced to pull over on the run to Tosa with four laps remaining. Senna said: “It was a pity because it had been a good race. Prost was faster than me on the straight, but other than that we were in good shape.”

That promoted Ferrari’s Stefan Johansson into the lead, sending the tifosi into raptures as he’d charged up from 15th on the grid in his second start for the Scuderia. Alas, he suffered an electronic issue which gave a false fuel reading, and he too ground to a halt after one glorious lap at the front. 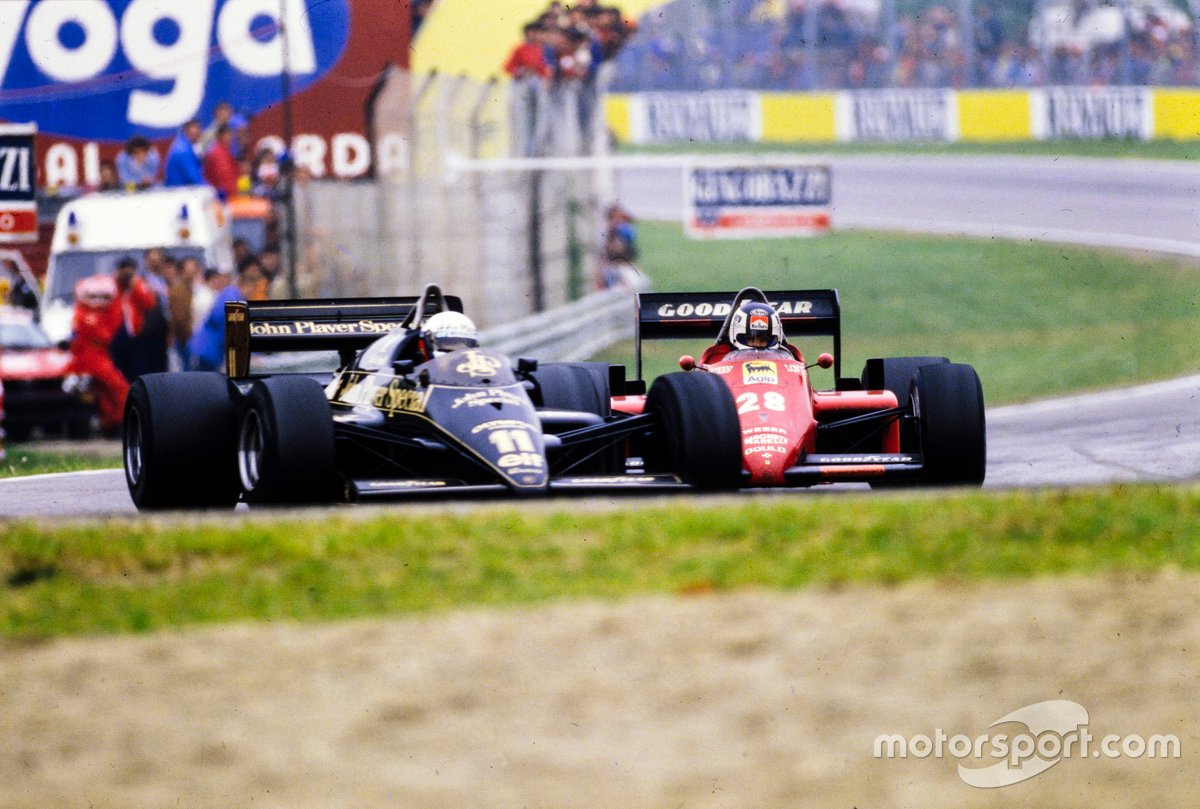 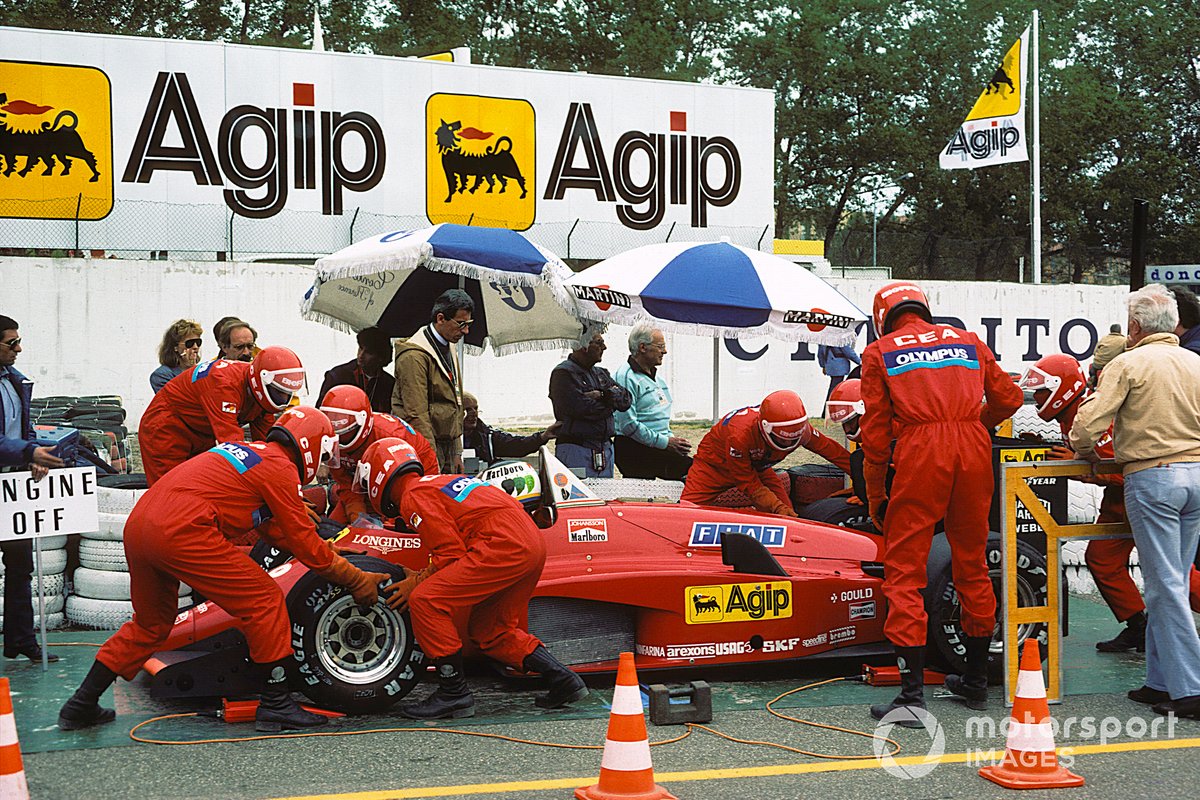 Johansson’s demise handed the lead to Prost, who was clearly saving fuel and short shifting around the final laps to claim an easy victory – or so he thought! Prost’s car ran out of fuel at Variante Alta on the slowing-down lap, so it appeared he had eked out his fuel to perfection. But his McLaren MP4/2B TAG Porsche was found to be 2kg under the minimum weight limit (including 2kg tolerance) in post-race scrutineering.

Prost had thumbed a lift home from Patrick Tambay, sitting on the Renault's sidepod, and duly took his place on the podium before the scrutineers made their discovery that would disqualify the winner. With Prost excluded, de Angelis inherited the victory – although it took two hours (and multiple sets of scales) for the stewards to persuade McLaren boss Ron Dennis that Prost’s car was too light to be legal.

However, de Angelis – who had crossed the line over 38s behind Prost – didn’t take all the credit for making his fuel last until the end. “The engine decided to turn the boost down itself, that probably helped me finish," he admitted. "Later I turned it up and it was good, but in the end I had a brake fire and no brakes at all for the last three laps.” 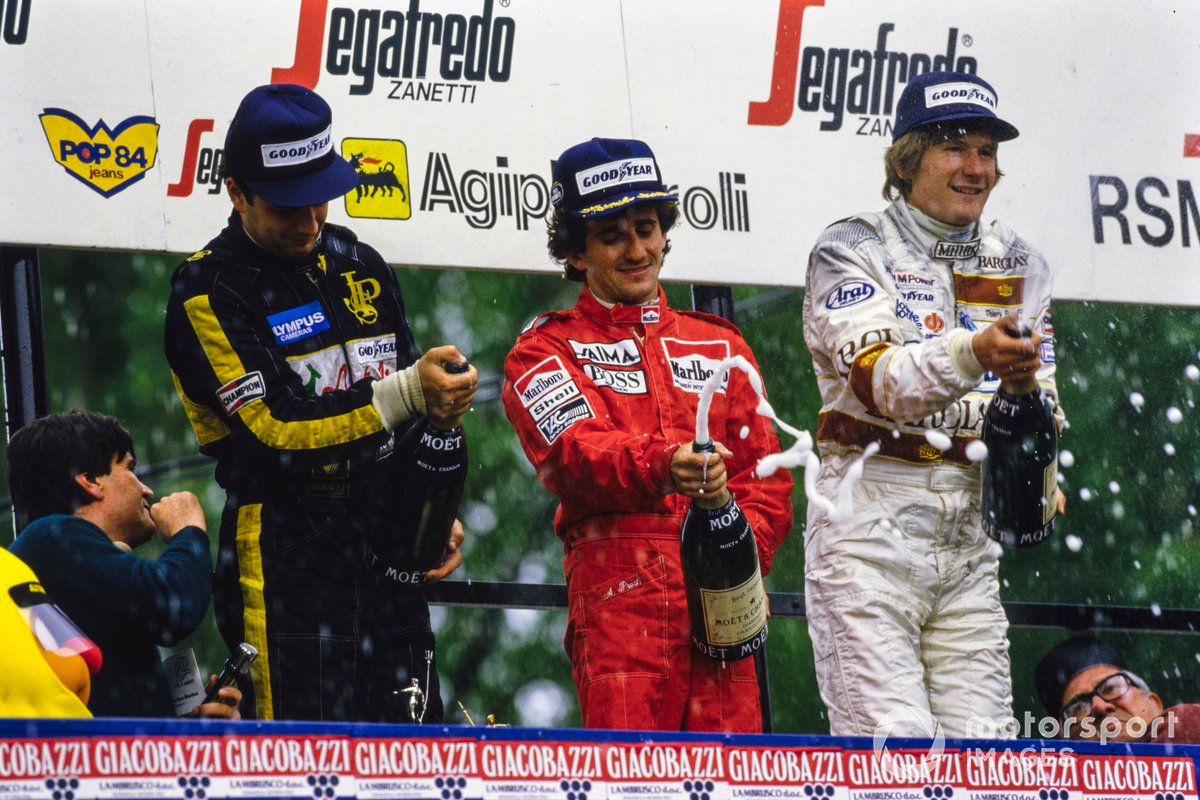 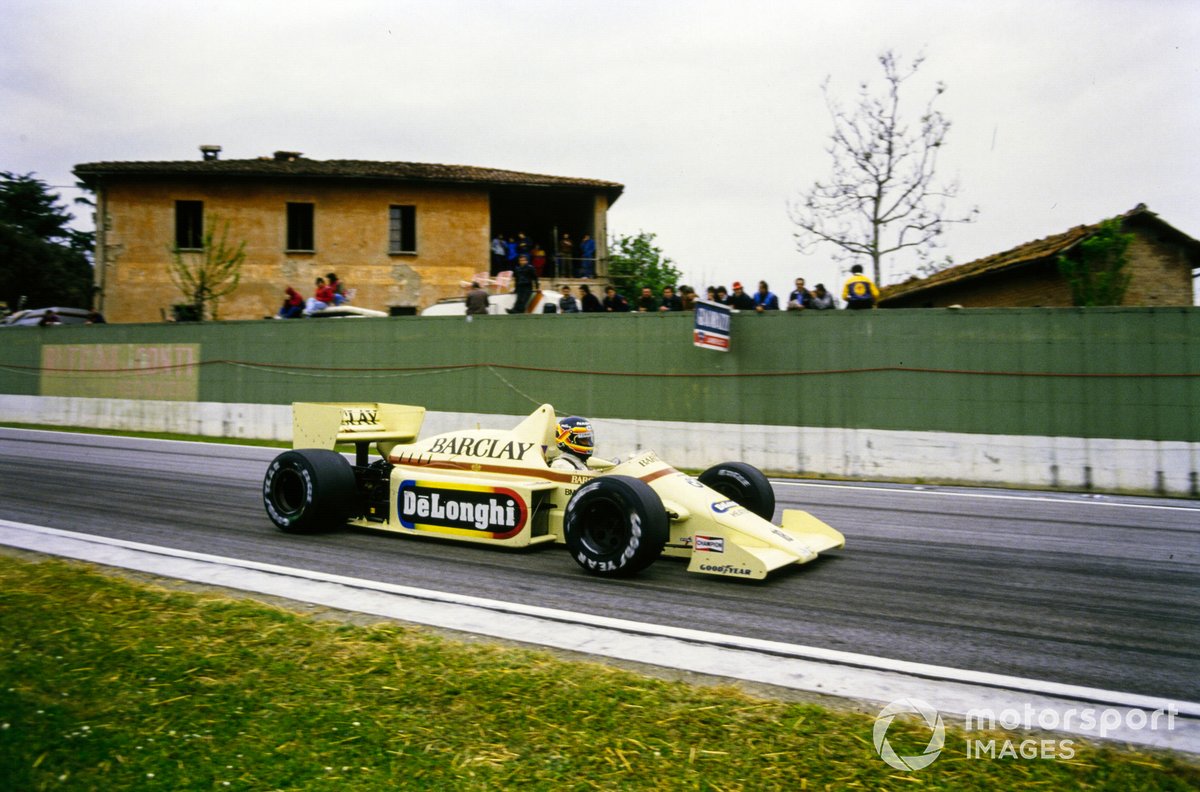 It would be de Angelis’s final F1 win, albeit one where he didn’t actually lead a lap! Boutsen was classified second, despite running out of fuel and pushing his car across the finish line, one lap down!

Tambay finished third, just failing to pip Boutsen’s leg-powered Arrows, ahead of reigning world champion Niki Lauda, who’d been struggling with the gearbox of his McLaren, Nigel Mansell (Williams) and Johansson, who was the first of five other cars to run out of fuel that didn’t see the chequered flag. 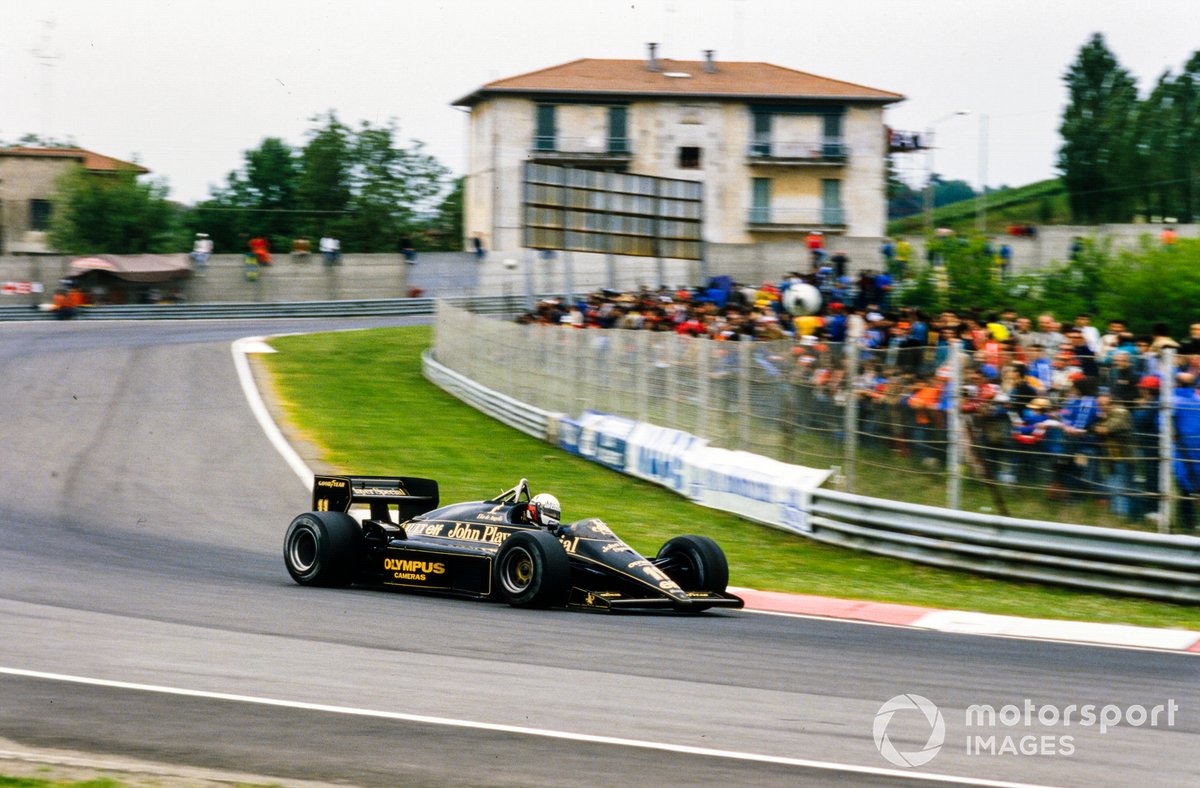 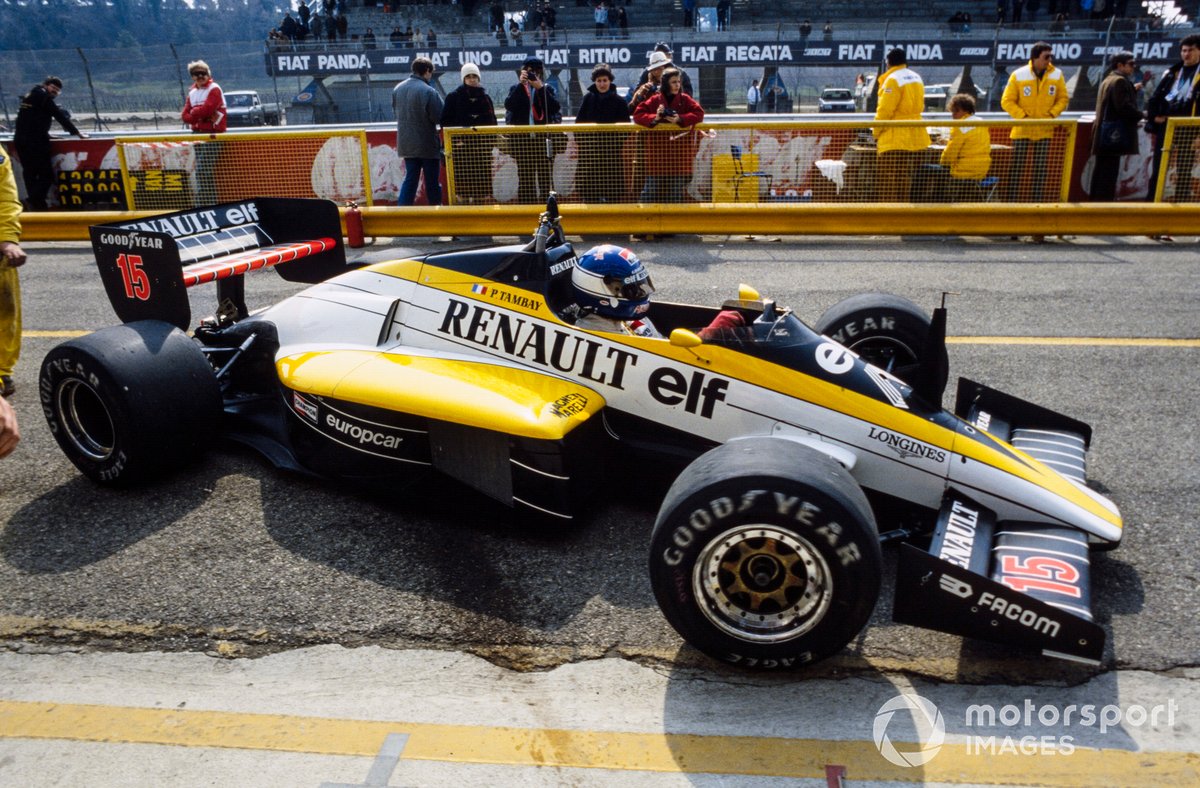 F1 must aim for IndyCar levels of competitiveness, says Brown