Michael Schumacher took the 80th win of his career at the British Grand Prix after beating McLaren pole sitter Kimi Raikkonen in the first pit stop. Schumacher started from fourth on the grid and Raikkonen led the first stint but Ferrari's strategy ...

Michael Schumacher took the 80th win of his career at the British Grand Prix after beating McLaren pole sitter Kimi Raikkonen in the first pit stop. Schumacher started from fourth on the grid and Raikkonen led the first stint but Ferrari's strategy won the day, Schumacher on a two-stopper to Raikkonen's three. Rubens Barrichello completed the podium in third and BAR's Jenson Button came home fourth. 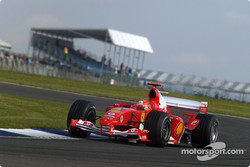 It was a clean start, the top positions holding formation. Raikkonen shot away into the lead while further down, BAR's Takuma Sato and Williams' Juan Pablo Montoya argued over seventh. Sato got the position only to go wide at Becketts and have Montoya snatch it back.

Both Renaults couldn't make their usual flying starts; Schumacher moved to effectively block Jarno Trulli, who was behind him, off the line and Fernando Alonso got boxed in by the Jordans back in the midfield. Alonso gained one place and began working his way up through the pack.

Felipe Massa held 10th in the Sauber and teammate Giancarlo Fisichella, who started at the back, moved up to 16th. Jaguar's Mark Webber was ninth and teammate Christian Klien took Jordan's Giorgio Pantano for 14th. Alonso overtook Toyota's Cristiano da Matta for 12th, quite a lot happening behind the front runners.

Trulli, McLaren's David Coulthard and Montoya were nose to tail in fifth, sixth and seventh respectively, and Raikkonen was extending his lead over Barrichello. Alonso was the first into the pits on lap eight, followed by Barrichello on the next lap which was good news for Raikkonen, who stayed out longer. What was not good news for the Finn was Schumacher staying out even longer.

Alonso had a hard working afternoon, making his way up to the edge of the points, only to have to pit for his scheduled stops and do it all over again. Raikkonen and Button pitted together and Jenson managed to get out ahead of Barrichello for third. Raikkonen, however, was stuck behind Sato, who was yet to pit, and at the front Schumacher was hammering out fast laps. Raikkonen finally got past the BAR at Copse but it cost him valuable time.

There was still a big battle going on in the midfield. The pair of Minardis were being lapped by three or four cars at once, all of whom were fighting for position. Schumacher pitted after about 15 laps and had built up enough of an advantage to rejoin in the lead. The Ferrari strategy yet again made it work and Raikkonen had the luck against him with the traffic.

Olivier Panis, who was having a fairly quiet time, had a bizarre incident when the Toyota's fire extinguisher went off in the cockpit. Blinded by the foam on his visor, Panis had no choice but to pull off the track and then the engine stalled, so that was the end of his race.

Pantano spun but managed to keep it going and at the front it was Schumacher, Raikkonen, Button, Barrichello. Alonso was back up to tenth and determinedly harassing Webber but couldn't find a way past. Raikkonen was right behind Schumacher but similarly stuck. Fisichella, on a long two stopper, finally pitted on lap 24 and it really worked out well for him. He rejoined just one place down and still in the points.

Fed up with being stuck behind Webber, who was doing a good job of fending off the Renault, Alonso pitted for the second time. Williams' Marc Gen?, who was having an anonymous time just outside the top ten, did likewise and the rest peeled in on the following few laps.

Raikkonen and Barrichello came in together, Ferrari obviously hoping to jump the McLaren as they were on the same strategy, but Raikkonen emerged ahead. However, it was enough to get Barrichello back out in front of Button again. Minardi had a difficult race, Gianmaria Bruni given a drive through penalty for ignoring the blue flags and then dragging the fuel hose in his second stop. None of the crew were seriously hurt. Zsolt Baumgartner retired with an engine problem. 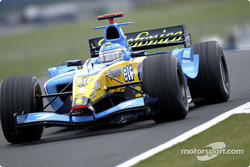 Alonso was again up to the edge of the top ten but was stuck behind da Matta, and Schumacher took his second stop to rejoin in the lead once more. It looked fairly static heading into the last part of the race but then, with 20 laps to go Trulli, who was running in the points, had an enormous crash at the exit of Bridge.

At 170 mph the car spun, hit the barrier in a heavy impact, turned into the gravel and rolled over before coming to rest. Trulli was shaken but extracted himself from the cockpit fairly swiftly and seemed basically intact. The car was just about destroyed and the tyre barrier not much better -- there was also a lot of debris on the track so the safety car was deployed. Initial reports suggest it may have been a rear suspension failure.

The safety car period created some tension. As soon as the SC came out, Raikkonen shot into the pits for his third stop, effectively getting it free, and some of the other three stoppers did the same. Once back on track, Raikkonen had two cars between himself and Schumacher, both of whom were about to be lapped by the Finn.

With 16 laps to go the SC came in. Raikkonen just couldn't get past the two backmarkers quickly enough: he was close to Schumacher once he did but not close enough. Had he been directly behind the Ferrari at the restart he could well have got past -- but it was not to be.

Button had a look at Barrichello at the restart but was similarly not really close enough to the Ferrari. Pantano spun again and beached the Jordan in the gravel and the remaining few laps held formation to the end. Barrichello was closing on Raikkonen but time ran out before he could do anything about it.

For once Schumacher had to work quite hard right to the end to get the win -- had the safety car not appeared he would have been maybe 15 or 20 seconds ahead of Raikkonen at the line. As it was, just three seconds separated the top three as they took the chequered flag. But it was a fine win for Michael.

"I was amazed how the race went," said Schumacher. "I thought we had a very good strategy for the race but that it would pay out so early, leading the race so early basically after my first stop coming in front ahead of everybody, that was not the plan, honestly. But my car was just going so well in the last laps when I had free track that I was able to close the margin I had on Kimi which he pulled out in his first 11 laps and that was just phenomenal."

A well-deserved second for Raikkonen, who drove superbly and reminded everyone just how good he is given a decent car. McLaren did not think it could take the win but second is a great result given the season the team has had so far.

"I just tried to do my best and push as hard as I could because I knew that Ferrari might be quicker than us over the race distance so I tried to build as much gap as I could," said Raikkonen. "I did it well, but every time when I came out from the pits I was stuck behind someone so I couldn't use my new tyres, really, to gain more time. Then Michael got in front of me and I was stuck behind him. I tried to pass but I wasn't quick enough."

McLaren boss Ron Dennis was very pleased. "We've turned things up a bit, it's a step in the right direction," he said, looking remarkably smiley and un-Ronlike. "There's another step coming in Hockenheim, so we can maybe take the race to Michael again."

"We enjoy the second place but it's best of the losers and we're here to win. They (Bridegstone runners) had a tyre edge, Fisichella's performance showed that, but we're close. The race tyres need to be a little bit better, which they should be in Hockenheim. It was a bit frustrating being blocked in traffic, and Michael backed us to Rubens, but it was a good race."

Barrichello felt he was hampered by traffic otherwise a better result would have been possible. "I had quite a good race but a tough one," said the Brazilian. "I was catching slightly, I opened up on Jenson, but when I came to the first pit stop I went out a little bit heavy in the middle of the traffic and the car wasn't working very well. That's the part of the race that really cost me more points really and maybe the victory."

Trulli's crash was shocker but the main thing is that he was unharmed. Renault's Alan Permane said afterwards: "The back end is all smashed up so it's hard to tell what happened. We need to look at the telemetry before we know. It's a flat out corner and Jarno said to me something broke at the rear. We don't know if it's suspension but he said the car went down at the back then threw him into barrier." Trulli quipped later on, in regard to how he was feeling: "The head is just a bit crazier than before!"

Williams still struggled but Montoya managed a solid fifth. Fisichella did a great job to come home sixth after starting at the back -- Sauber made some big improvements to the car for this weekend and it looked competitive. Massa had been running in the points too but dropped outside after his final stop.

Coulthard came home seventh after a bit of a disappointing race and Webber took the final point after a tough afternoon for Jaguar. Alonso's hard work came to nothing, the Spaniard finishing 10th. A weekend to forget for Renault, although it still holds a reasonable gap over BAR in the standings as Sato also finished outside the points.

Ferrari's charge towards the titles seems unstoppable; it's more than likely too late in the season now for anyone to do enough to prevent the team and Schumacher taking the glories this year.

However, every race seems to show a little more competition from rivals, needs a little more hard work on the behalf of the Scuderia. BAR, Renault and now McLaren are on the verge of really challenging Ferrari. It's just a shame it didn't come a little earlier in the season. Final top eight classification: Schumacher, Raikkonen, Barrichello, Button, Montoya, Fisichella, Coulthard, Webber.