Mick Schumacher believes that his sixth place in qualifying for the Canadian Grand Prix has proved that he deserves his place on the Formula 1 grid.

The Haas driver was quick throughout the rain-affected session, and felt afterwards that he could have done even better than sixth.

His Montreal performance came after Schumacher drew critique following his Monaco crash, which was followed by a clean but uncompetitive weekend in Baku.

After claiming an impressive result on Saturday, the German will hence start immediately behind Haas teammate Kevin Magnussen.

"Obviously, it's nice to have a good result,” said Schumacher. “But it's also something to build on. And, you know, just prove to everybody yes, I am here for a reason.

“I was hoping for more, I think there was more in the car and myself, I just didn't maximise the last set because of traffic and other moments. But in general, very, very happy about qualifying.

“But I think everybody's also cautiously happy about it, just because we still have tomorrow to go for. But overall, I think we've done a good job today, which is good for the team, but also good for us.

Asked by Autosport/Motorsport.com if he felt he had silenced the critics he said: "Honestly I don't really listen to that. I'm here for a reason, and that's because I love the sport, and love racing.

“And I've proven enough I think in my junior days to have a reason to be here."

Towards the end of Q2 Schumacher was offered the chance to pit and have one lap on fresh tyres, or run three on the tyres he had. He made a decisive choice to stay out and keep lapping.

“I was on a good lap when we talked about it,” he said. “So it was it was definitely the right choice.

“There was a lot of standing water around. So that definitely didn't help the easiness of driving. But I do have to say, I enjoyed it a lot. And I was feeling very comfortable, which I think was displayed in my driving.” 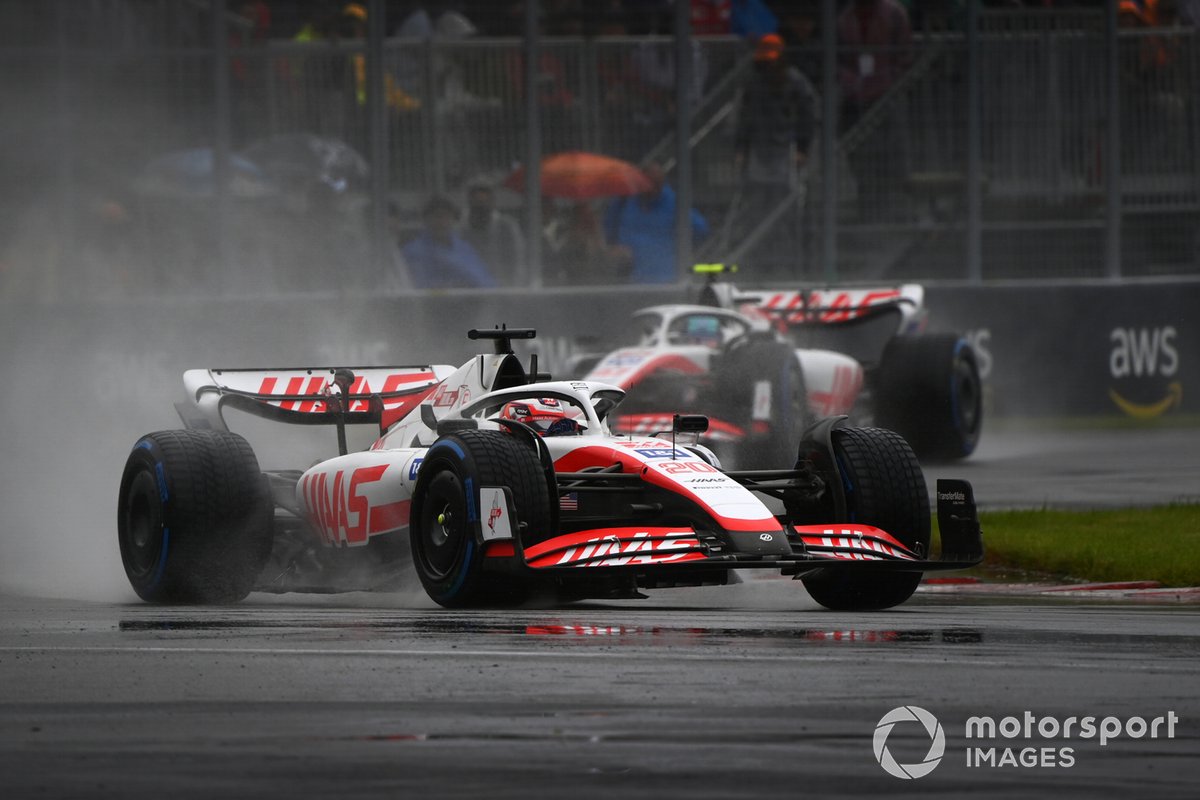 Asked if he could target his first points on Sunday he said: “Of course. And I think that we have a few cars which are quicker than us in the back. So we'll just do our best for tomorrow.

“I mean, anything can happen. This is Montreal, and there's obviously a lot of laps so a lot of opportunities to fend off, but also to attack, so we don't give up today.

“We just want to have the best result for us as a group and as a whole. So that's definitely in our minds now. And we'll just have an in-depth meeting about what we need to do to stay in the position or be at least around where we are now.”

Magnussen was quick to thank his team for making the right calls and putting him on track at the optimum time.

He was also keen to praise Schumacher after the latter's recent run of misfortune:

“I wish there were points for [Saturday]!,” the Dane reflected after the session.

"It's a really good job from the whole team today. In these conditions it's so much about sending you out at the right time, and figuring out how to use your laps, and the team really did well today. So P5 and P6, I'm really happy about that.

“There's some fast people at the back and also right behind me, so I'm certainly not thinking that P5 is going to be our target tomorrow. We'll take it if we can, of course, but I think our car is sort of around the middle of the field pace-wise in the race.

“We start a little bit on the forefoot because we are P5, and so let's see. I would be very happy if we can stay inside the top 10.”

"Very pleased for [Mick]. He did a really good job in qualifying, I could see that he was quick. But I’m really happy for the whole team especially."

Verstappen: Mercedes drivers shouldn't speak for others in porpoising debate