Jun.13 (GMM) Michael Schumacher's run of bad luck in 2012 is hard to fathom, according to Peter Sauber.

Team boss Sauber, who was instrumental in bringing the seven time world champion into F1 in the early 90s, said that in the third year of his comeback with Mercedes, Schumacher is finally at the wheel of a worthy car. 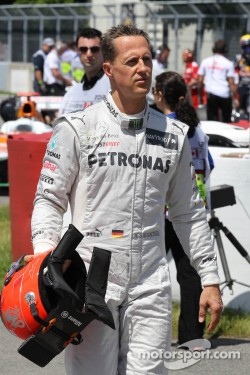 "But I have to say that Schumacher's bad luck is incredible," Sauber told the Swiss newspaper Blick, referring to yet another technical problem for the 43-year-old in Canada.

In F1's new high-reliability era, Schumacher has failed to finish five of the seven races so far, and is therefore ranked only narrowly ahead of 2012's non-scorers fielded by Caterham, Marussia and HRT.

"I've never seen it in Formula One before. I feel really bad for him," said Sauber.

Mercedes team boss Ross Brawn apologised to Schumacher in the team's official post-race statement after Canada, and in the media denied the great German is being given inferior equipment, attention or mechanics.

Brawn now tells Bild newspaper: "Our goal is 100 per cent reliability. We have achieved this with Nico (Rosberg)'s car but not for Michael.

"We are giving this the highest priority."

But with his contract expiring this year, it is rumoured Schumacher is losing patience with the situation.

It was rumoured he left the Montreal circuit immediately after his retirement without attending his normal engineering de-brief or waiting for the chequered flag.

"Michael did do a debrief with his engineers," Brawn insisted.

"In Canada, he wanted to avoid the big traffic jam that happens after the race.

"One of Michael's special skills that we value the most is his team spirit, which he shows especially in difficult situations."

Indeed, on his official website, Schumacher said it is "completely understandable" that F1 teams' reliability records are not always perfect.

"I won't lose my nerve or my faith in the team," he said.