Schumacher must convince Mercedes to 'want him'

May 25 (GMM) If Michael Schumacher wants to keep racing beyond 2012, he will need to convince Mercedes. 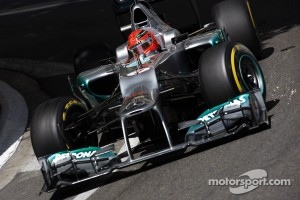 That is the claim of former German F1 driver Christian Danner, referring to rumours the seven time world champion's future beyond this year is uncertain.

Schumacher, 43, has said he is yet to sit down for talks with Mercedes, who have named former DTM protege Paul di Resta as an ideal successor.

"Personally I would be very happy if he goes on and he is able to go on at a good level, because at the moment he is starting to look a bit old," Danner said on German television RTL.

Danner said he believes Schumacher wants to continue in 2013, but the issue of a new contract "is not just up to him".

"He also has to have the team to want him," he explained.

Earlier this week, Mercedes' F1 chief executive Nick Fry suggested that the great German might choose to retire if he does not achieve better results by the end of the season.

Boss Ross Brawn reacted by insisting the team had let Schumacher down so far in 2012, and then clarified his remarks on Thursday in Monaco.

"We - and that includes Michael - have not done a good enough job collectively in the first five races," said Brawn.

Vettel back to 'naughty' old self - Marko