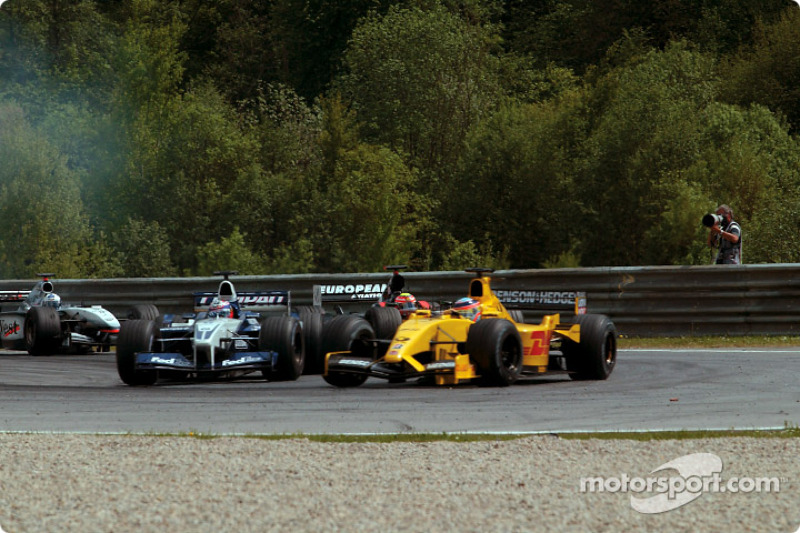 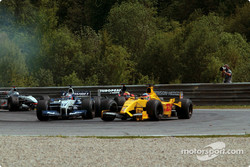 Juan Pablo Montoya and Takuma Sato, seconds before the Sato/Heidfeld accident.
Photo by BMW PressClub.
Takuma underwent thorough medical tests and doctors confirmed that he has no broken bones or injuries. Contrary to some inaccurate press reports, he did not lose consciousness and suffered no concussion. His manager Andrew Gilbert-Scott reported that in hospital, "Takuma was on excellent form, joking with the medical staff, and eager to see his blood pressure and heart beat monitoring charts so that he might analyse his own personal telemetry."

Takuma commented today, as he left hospital, "Really I am totally okay! My legs and knees are a little sore but that's all. I remember everything about the accident. I was turning into the corner with Montoya almost alongside me. I was just starting to get on the throttle when I had the big smash. I heard a big bang and shut my eyes for a split second. I had no idea what it was and didn't see Heidfeld coming at all. When I opened my eyes I could see my legs were squashed by the damaged monocoque and I could also see the ground through the hole! It was obvious that I had had a big accident. I was conscious and could feel my arms and legs, and although there was some pain, I knew nothing was broken. The car did a great job of saving me, and I hear there is nothing left of it, but I am fine. 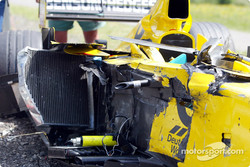 Takuma Sato's Jordan after the accident.
Photo by Jordan Grand Prix.
"I would like to say thank you to the medical staff at the circuit and the hospital, they have done an absolutely fantastic job. I am so grateful for their hard work and also all the concern and support I have had from the teams, fans and everyone who has contacted me. The doctors have told me there is no problem with me driving in Monaco, so we will see in a couple of days how I feel. I think I will be okay for Sunday (the Monaco Historic race) as planned too, but first I will see my doctor in England and get advice from the vielife experts".

Takuma flies back to the UK today with his manager and his girlfriend, following which he will spend some time resting in preparation for the Monaco Grand Prix. A decision will be taken tomorrow regarding his participation in the Grand Prix de Monaco Historique on 19th May. 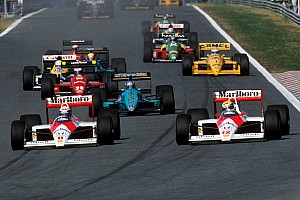 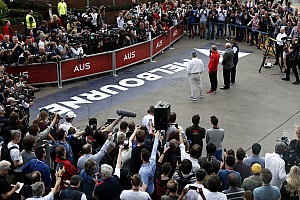