Apr.17 (GMM) Sao Paulo's mayor has dismissed reports Bernie Ecclestone is close to dropping Interlagos from the F1 calendar after 2013.

F1's chief executive was quoted by O Estado de S.Paulo newspaper as saying the city will not be on the 2014 calendar because long-promised renovations to the ageing circuit were not done. 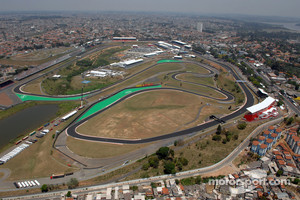 But mayor Fernando Haddad, the new mayor of Sao Paulo, told Agencia Estado news agency that the reports were "irresponsible".

"More than a month ago I sent a letter (to the FIA) committing myself to reform the racetrack," he said.

Haddad said reports Interlagos will not be on the 2014 calendar are therefore not true.

The magazine Motorsport said the race's founder, Chris Pook, is also interested in the Ecclestone deal, as is Zak Brown, the head of the leading F1 sponsorship agency Just Marketing.

"There's a lot of talk about a third (US) race on the west coast," Brown said. "I'm an advocate of F1 buying the Long Beach GP.

"I think I can facilitate that and I've been having those conversations."

Raikkonen not complaining about Pirelli

F1 must wait to bid for Long Beach race