Carlos Sainz insists he wants nothing "weird" to happen to Ferrari teammate Charles Leclerc in the Abu Dhabi Grand Prix in order for the Spaniard to beat him in the Formula 1 standings.

Norris gave himself a good shot at jumping Leclerc by qualifying third at Yas Marina, while Sainz will start fifth, and Leclerc seventh.

Although he has a two-place advantage on his teammate, Sainz insists that he's not concerned about his personal position, and is instead focussed on Ferrari's slim chance of overhauling McLaren for third place in the constructors' championship.

"I need something weird to happen, which I don't want, because I don't want any chance of McLaren getting ahead in the constructors'," he said.

"I just want to finish the season on a high.

"Today the homework is done with a strong qualy, and tomorrow with a strong race I will go to the winter break very happy independent of where I finish in the championship, because to be in the fight for P5 already with Lando and Charles, that is their third year with the car, and actually having a chance of beating them, already means it's a positive year.

"And I just need to focus and get in a good season finally to go into the winter break confident. And already today definitely helps." 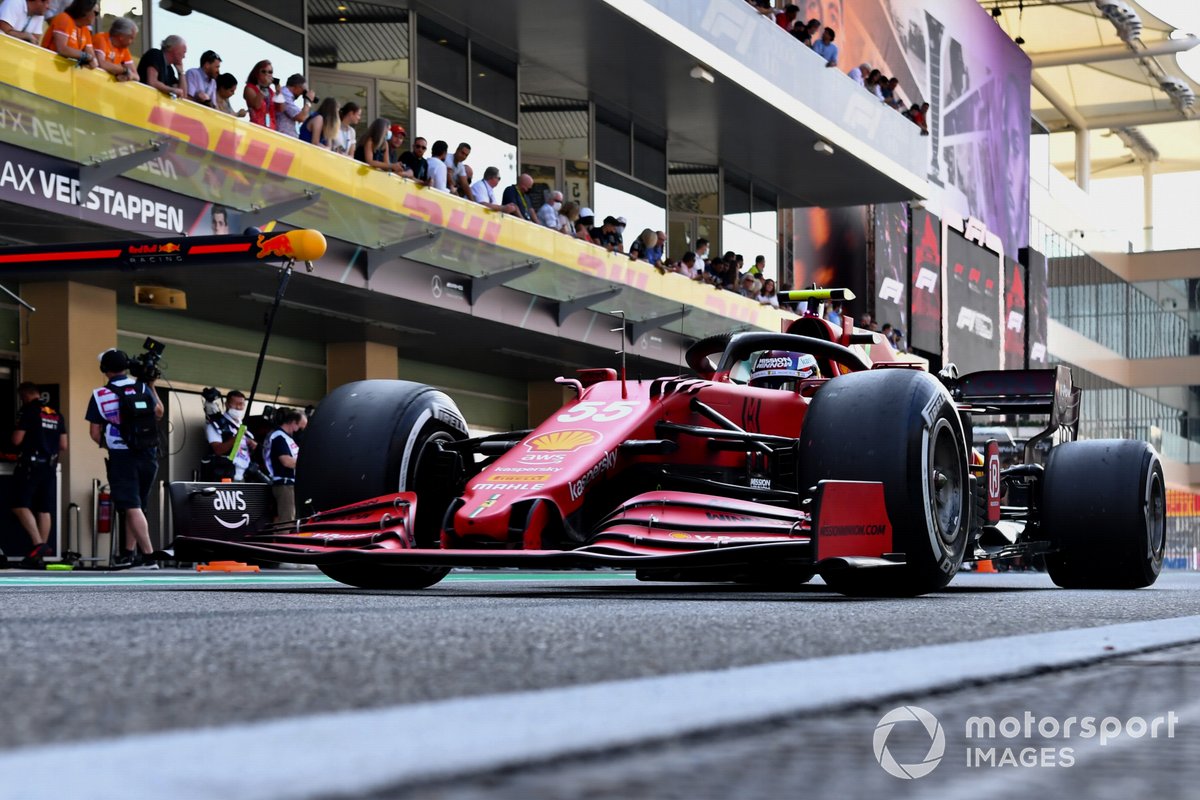 Sainz felt that Abu Dhabi qualifying was further evidence of the step that he's made recently.

"Particularly the last six or seven races I feel like I got the best out of the car in pretty much every qualy, and this is something that I managed to do at McLaren very often. And it was a bit of a lesson to be pushed in this last third of this season.

"To be honest, I have been up against strong qualifiers my whole career, with Max [Verstappen], Lando and Charles now, and I've never felt like I have anything to lose against them.

"I just think this last third I'm doing what I was doing in the McLaren and in the Toro Rosso when I was on top of it."

He was relieved to find performance when it mattered after a disappointing first day in Abu Dhabi.

"I was not at home for the first time in six or seven races on a Friday. I was really a bit lost and we couldn't understand why.

"Today we turned things around and I found a much easier car to drive and I could adapt myself so thanks to the team on that regard. It was quite a challenging qualy, still but we managed to put it together.

"How you treat the tyre was quite important, not only change the floor and the gearbox, put the race gearbox on definitely gave us back some performance.

"But the tyre was a big thing. In Q2 I was really pushing in Sector 1 and 2 and then in Sector 3 always struggling, and for Q3 I managed to change a bit my approach and put a very solid Sector 3 and go down into the 1m22s, that was the target for Q3."

The Abu Dhabi Grand Prix as it happened