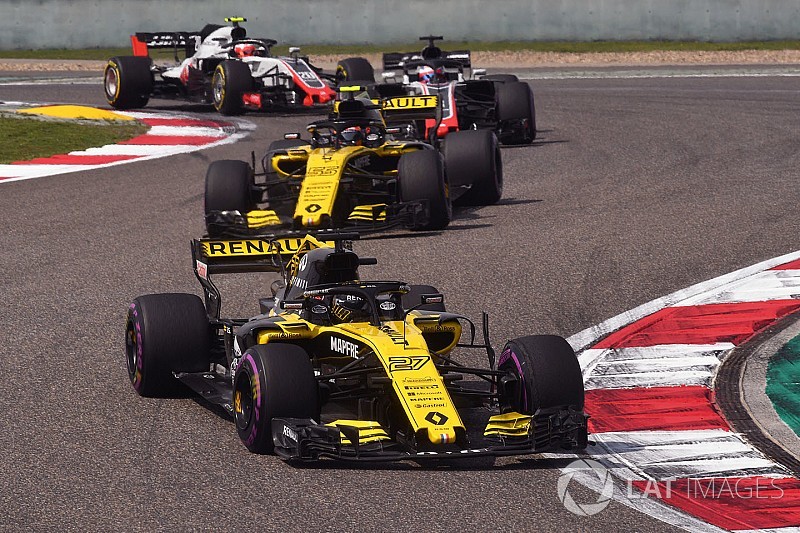 Renault believes the quality of Nico Hulkenberg's performances in Formula 1 this season is best exemplified by his teammate Carlos Sainz's previous form against Max Verstappen.

Sainz has been on loan at Renault from Red Bull since moving across from Toro Rosso late last year, and his stint in the energy drinks company's junior team included being paired against Verstappen for 23 races.

Though Verstappen outscored Sainz considerably in that spell, Sainz's qualifying form was excellent and he was often let down by poor reliability.

Renault Sport boss Cyril Abiteboul told Motorsport.com that was a good illustration of how impressive it is that Hulkenberg has beaten Sainz in each of the three grands prix this season and scored 22 points to his teammate's three.

"It's fair to say he [Sainz] has a bit of a margin compared to Nico, but that does give an indication of how strong Nico is," said Abiteboul.

"It's always interesting to follow the change of team for drivers, because by comparing one to the next you can establish an overall comparison between the grid.

"If you remember what Carlos was doing against Verstappen, that does give an indication of how strong Nico is actually."

Sainz was outqualified and outraced by Hulkenberg in the final three grands prix of 2017, after his Renault debut in the United States coincided with Hulkenberg suffering a grid penalty and then race retirement.

He was faster than Hulkenberg in the 2018 opener in Australia until the final part of qualifying, and Hulkenberg has been ahead when it counts ever since.

"He has a bit of a margin but there is absolutely no panic – both on Saturday and Sunday," said Abiteboul.

"I'm completely confident that he can, in our environment, in our landscape, continue to learn, continue to develop, and hopefully equal Nico.

"But he's also pushing Nico. The Nico we have this year is different to the Nico we had last year."

Hulkenberg has been the most consistent performer from the group of drivers battling behind Mercedes, Ferrari and Red Bull, and has qualified seventh for the past six races.

Abiteboul said he "definitely" deserves the title of 'best of the rest' and has been "frankly fantastic" in races.

"We will be in Baku next, where I remember he made a mistake, hitting a wall which maybe cost him a podium," said Abiteboul.

"That is really his target. I can feel this record of number of races entered without a podium [138] is not going to stand for long."

Asked by Motorsport.com to rate his own performances this season, Hulkenberg said: "I feel pretty confident and happy. With these cars, since last year, it probably favours me more.

"I do feel that with all the seasons I've done, the experience, I'm doing amongst the best driving I've ever produced. So far I'm happy, but don't praise the season too soon."

The contradictions that prevent a perfect F1