Carlos Sainz believes his clash with Daniel Ricciardo during Sunday's Formula 1 United States Grand Prix was "on the limit of legality" after picking up minor front wing damage.

Ricciardo managed to get the jump on Sainz in the opening stages after a close first-lap battle that saw the McLaren and Ferrari drivers go side-by-side.

Sainz had looked to recover the position by undercutting Ricciardo at the second round of pitstops, only for a slow service by Ferrari to allow McLaren to respond one lap later and keep its driver ahead.

Sainz managed to close on Ricciardo and tried to pass him around the outside of Turn 14, but as Ricciardo squeezed the Spaniard out wide, the two cars made light contact.

The move was not investigated by the stewards, but Sainz said over team radio that it "got a bit dirty" as he struggled with some minor damage on his front wing.

Ricciardo went on to finish the race fifth, while Sainz slipped behind Mercedes' Valtteri Bottas in the closing stages, leaving him seventh at the chequered flag.

"For me, honestly, I think it was on the limit of the legality," Sainz said about the clash after the race.

"Of course he did it on purpose, he wanted to leave me without room on the corner exit with the caveat that we touched. Without the touch, he would have done it, I think clean, perfect defending.

"Just that slight contact that we had made it a bit on the limit for me. If I was in his position, I would have done exactly the same. Obviously I wouldn't have tried to have contact, like we had in the end, but the guy on the inside has the right to run the car on the outside out of road.

"He was within his right to do what he did, just the little contact that he gave me I think was avoidable.

"That's what triggered my reaction on the radio, when we in an emotional situation. All the rest, it was a good, fun battle." 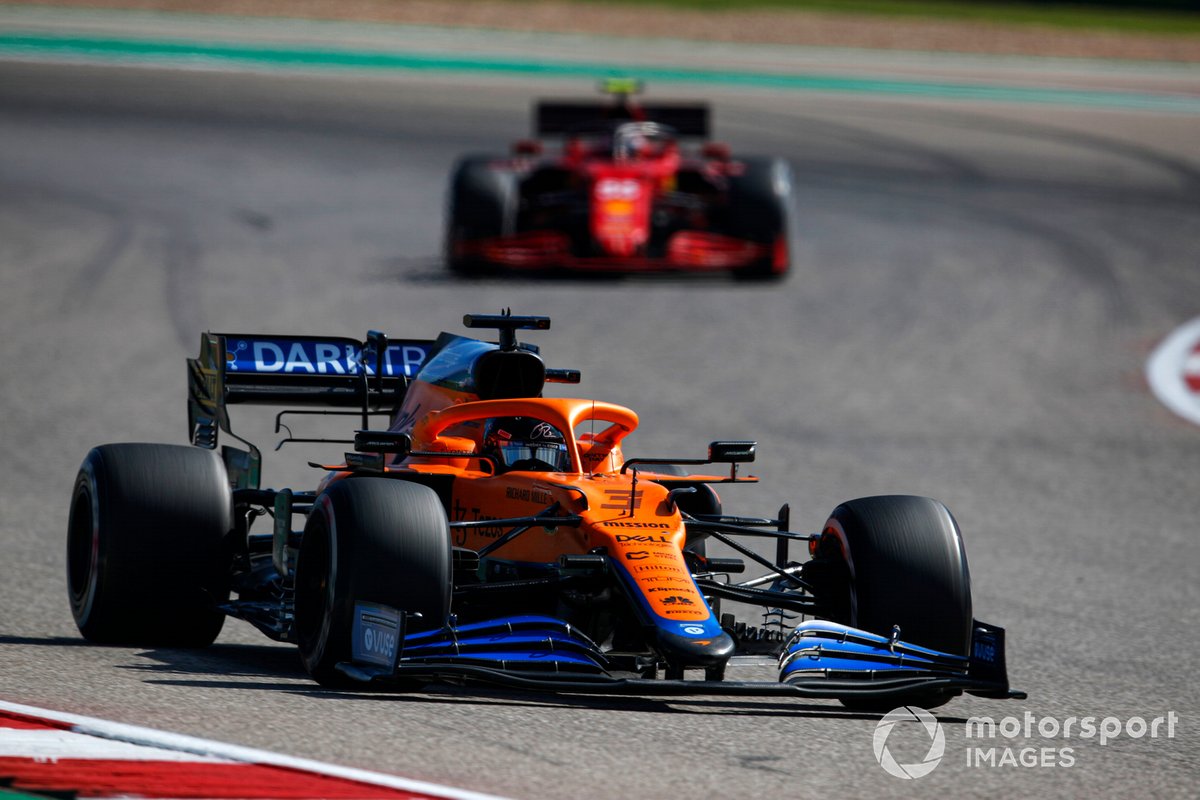 Ricciardo branded the move as "rubbing racing" after the race, and said he was "happy to be dirty" in response to Sainz's radio comment.

Despite losing out to Ricciardo, Sainz managed to finish ahead of Lando Norris in the second McLaren, helping Ferrari cut the gap to the British team in the fight for third place in the constructors' championship.

McLaren remains third, but is just 3.5 points ahead of Ferrari with five races to go this year.

"I think it's been super tight this year with McLaren, they've had the upper hand on some circuits," Sainz said.

"I think they will still have the upper hand in some of the circuits that are left this season, but the important thing is to put ourselves in a better position thanks to the effort back at the factory.

"Now it's allowing us to put ourselves in a position to take the fight until the last race.

"Maybe in Sochi and Monza, you would think they were the clear favourites to the end.