McLaren Formula 1 driver Carlos Sainz says his qualifying effort for the British Grand Prix “snowballed into a disaster” as he was consigned to 13th on the grid.

Sainz had finished in the top eight in five of the past six F1 grands prix, and was a creditable seventh-fastest in the opening segment of qualifying at Silverstone.

But while rookie teammate Lando Norris then progressed into Q3 and will line up eighth on the grid, Sainz went no further than Q2, missing the cut-off just under two tenths.

“It's been a bit of a difficult weekend for me, never feeling quite the rear end from the car,” said Sainz. “But apart from that Q1 was very positive, I was feeling like we could have a good qualifying, and then I just went slower with every set.

When the team told him of his final Q2 position on the radio, Sainz replied that he was “not surprised”.

Elaborating on this after qualifying, he said: “I just felt immediately when I went into Turn 3 I had no rear end in the car. I knew it was going to be a tough lap, and it just snowballed into a disaster.”

Sainz reiterated that he was at a loss as to why he felt his MCL34 lose grip with each run, describing this as a “strange pattern”.

“Normally you improve half a second from Q1 to Q2, but I managed to lose half a second. So it's difficult to explain, and no surprise because we definitely felt very tricky out there. But we need to explain why.

“Tomorrow should be better, but today I'm definitely not happy. Today it's time to analyse why today was such a disaster in terms of why the balance of the car was changing so much in qualifying - but also knowing tomorrow is going to be an interesting day and we can move forward.”

Norris, whose Q3 appearance was already the seventh of his rookie season, said he could be “reasonably happy” with eighth place - having taken on the upgraded Renault engine for Saturday's track action.

“The wind was making it quite tricky,” he said. “I think my best lap was the one I did in Q1 and I couldn't repeat it after that!

“It was a good lap but also the wind seemed to favour us a bit more. I think the wind changed halfway through, or between Q1 and Q2, and for some reason I seemed to struggle more with the car and couldn't improve as much as the others did.

“It's a bit frustrating from that side but I'm still happy with the P8 and it's been fun to drive here at Silverstone, especially in qualifying.” 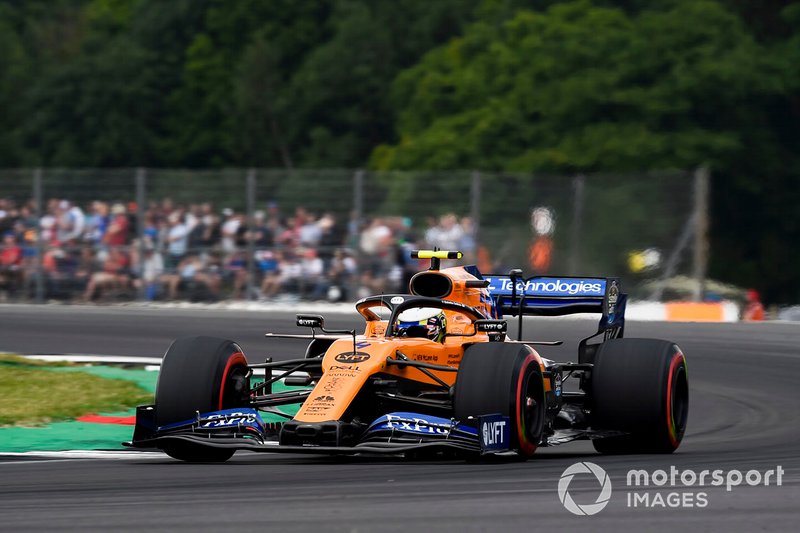