Carlos Sainz found it “difficult to believe” how new Formula 1 teammate Charles Leclerc was driving the Ferrari car before adapting his style and progressing through the season.

Sainz joined Ferrari for 2021 and linked up with Leclerc to help the team take third place in the constructors’ standings as it bounced back from its worst season in 40 years.

Sainz ended the year fifth in the drivers’ championship, 5.5 points ahead of Leclerc, and scored four podiums across the course of the season. Leclerc only finished on the podium once, but picked up two pole positions.

Both Sainz and Leclerc felt the had learned a lot from each other in their first year as teammates, but Sainz revealed he initially found it hard to believe how Leclerc was driving so quickly during pre-season testing.

“Since the moment I arrived to winter testing in Bahrain, I had a lot of things to learn from Charles,” Sainz said. “The way that he was driving the Ferrari in a particular way to be as quick and as fast as he’s being all year long, I’ve had to adapt myself [to it], I had to copy a lot of the stuff that I was seeing on the data.

“Sometimes it was difficult to believe that it was possible to do that, and it was so crazy quick that it was actually a bit shocking. But little by little, adapting and trying to learn from him, I managed to get to a good level.

“There’s still things that when we will go into the winter break, he’s much stronger than me in certain areas. We will exchange some information and we will try and both become better drivers learning from each other.” 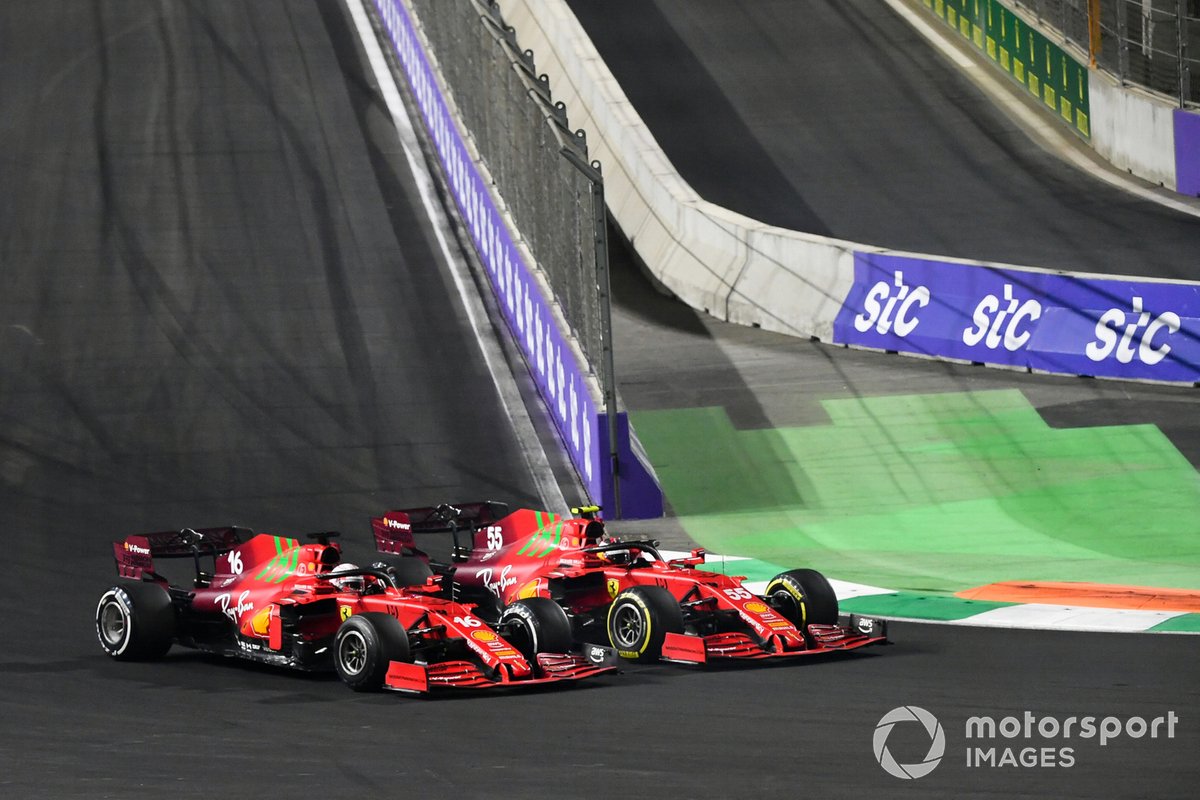 Leclerc and Sainz forged a close friendship off-track as well as on-track, coming as a boost to Ferrari as its on-track fortunes enjoyed an upward swing.

“We learned a lot,” Leclerc said. “As always, when you have a new teammate, you always learn, [such as] the new ways Carlos is approaching race weekends, the way he works, his talent, his raw speed also, the way he takes the corners.

“He’s had an amazing year, so he has obviously pushed me very, very much to try and perform better at every race and it’s just been extremely interesting.

“I think maybe one of the strong points of Carlos is the race management and tyre management, and that’s probably been my weakness in 2019. I’ve progressed a lot as a driver in 2020, and again this year, and part of this year is thanks to Carlos.”

Sainz and Leclerc finished one place apart in the race classification for four of the last five rounds of the 2021 season, and enjoyed a close battle for seventh place in Saudi Arabia.

Sainz felt confident that the close competition between him and Leclerc would take both drivers “to a better level next season, and it’s also going to benefit Ferrari.”

“It’s a great competition to have, and a great teammate to have, apart from being a super cool guy to have as a teammate,” said Sainz.