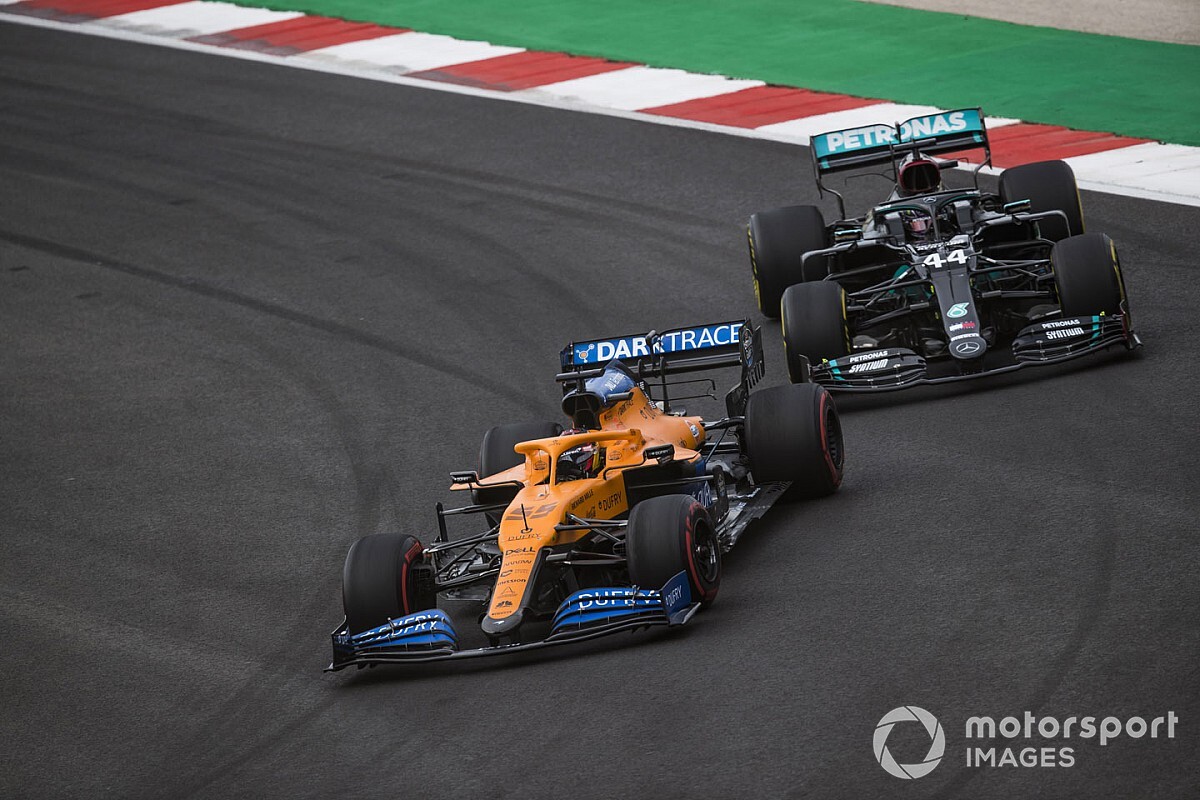 McLaren's Carlos Sainz believes few current Formula 1 drivers would be able to beat Lewis Hamilton at Mercedes, but that they would be able to win races with the car in the absence of the seven-time champion.

Hamilton wrapped up his seventh world title after one of his most dominant campaigns in his career, capped by a brilliant comeback win in Turkey.

Six of Hamilton's seven titles came in the V6 hybrid era, in which his Mercedes team has been the dominant force. That re-ignited the debate on the role both car and driver have played in Hamilton's record-breaking success.

Paddy Lowe, who was Hamilton's technical director at McLaren and Mercedes, previously told Motorsport.com that Hamilton's success is predominantly "down to his driving", praising the Briton's consistency and endurance across his career.

Hamilton's colleague Sainz asserted that "90 percent [of the grid] would not beat Hamilton at Mercedes", but that any driver on the current grid would be able to win races with the Mercedes W11 if the world champion were removed from the equation.

"As teammates, with that car, very few people would be able to beat Hamilton during a 20-race season," the McLaren driver said in Turkey. "But if you remove Hamilton, of the grid, any of the current F1 drivers would win with the Mercedes.

"That describes a lot what happens with current F1, but also that Hamilton, even if he has the best car, is one of the best or the best for a long time."

According to Sainz, Hamilton's ability to perform when it matters is one of the attributes that sets him apart.

"I look closely at how Hamilton performs under pressure," Sainz explained. "How in Q3 he always manages to do all the sectors well and take pole, even if it is by a small margin against [Valtteri] Bottas [in the second Mercedes].

"In Austria in the rain he took a second and a half from his teammate, he has things that you don't see everyone do."

Sainz, who will move from McLaren to Ferrari next year, added that he "would have to be Hamilton's teammate" to truly understand what sets the 35-year-old apart.

"Without driving the same car, it is impossible for a driver to know how good another [driver] really is," he added. "Hamilton seems to me to be one of the best drivers in history, and I know that without having been his teammate.

"I am very curious to know what it [would have been] like to have [Ayrton] Senna as a teammate, or [Michael] Schumacher, to learn from them, to know what they do to be so good."