Sainz "didn't leave an inch to the walls" fighting Verstappen

Red Bull's world champion Verstappen looked in control in the early stages of the race, but a late safety car for Yuki Tsunoda's off in Turn 1 spiced things up.

Sainz, who was still due a stop, used the safety car to slot in behind Verstappen for the restart on hard tyres that were five laps fresher than the Dutchman's.

While Sainz looked slightly quicker and managed to stay within Verstappen's DRS throughout, the Spaniard didn't quite have the pace to overtake Verstappen on Montreal's long straight due to poor traction out of the hairpin and Red Bull's top speed advantage.

Despite the DRS and optimising his battery deployment for the final sector, Sainz crossed the line in Verstappen's wake as the Dutchman celebrated his sixth victory of the season, with Sainz still chasing his first.

"But today, we just didn't have enough pace delta to get him close enough in the hairpin to then get him a bit out of line into the chicane.

"The positive thing is that we were quicker, we were faster all race. It was just that little bit more [we needed] to overtake around here." 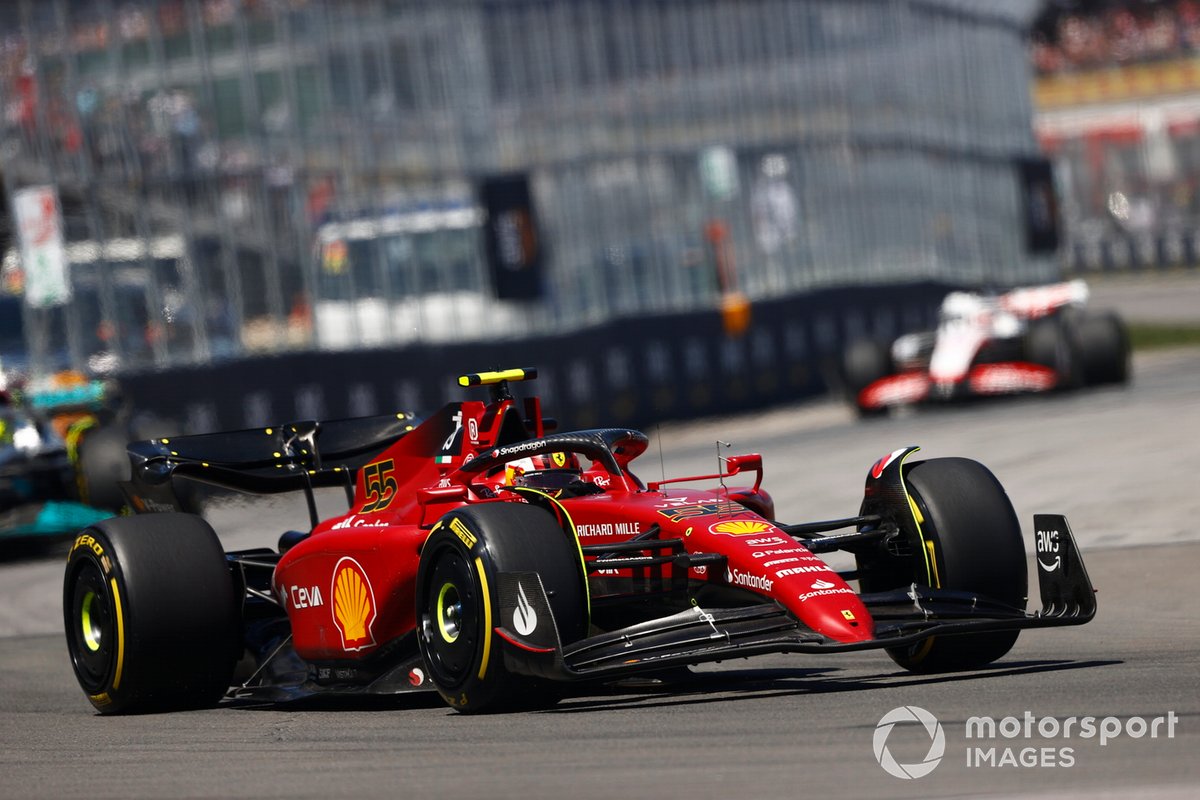 After a few races in which Ferrari tripped up with various mistakes, Sainz said it was good to see the Scuderia both had the pace and the race management to fight Verstappen until the last lap.

"Yeah, I'm particularly happy with the race pace, with the way we managed to put pressure on Max during the whole race, and the timing of the pitstops I think was right," added Sainz, who also grabbed the point for the fastest lap.

"Honestly, we tried everything, and we were very, very close to winning today. So I will take the positives and keep trying in the next one."

Verstappen said he would have "preferred attacking instead of defending" knowing how hard it was to follow other cars through the Circuit Gilles Villeneuve's first two sectors.

"The safety car didn't help," Verstappen said. "I think overall, they were very quick in the race.

"It would have been really tough for me to close that gap to the end, even on fresher tyres, but then of course, the safety car came out, so they had fresher tyres.

"I was like, well, I think I would have preferred attacking instead of defending, but luckily it worked out."

"Following is tricky around here, but I could see he was pushing, charging, pushing. So yeah, the last few laps were a lot of fun."

Verstappen now leads teammate Sergio Perez, who retired from the race with a suspected gearbox issue, by 46 points. Charles Leclerc follows a further three points behind after charging from 19th to fifth.