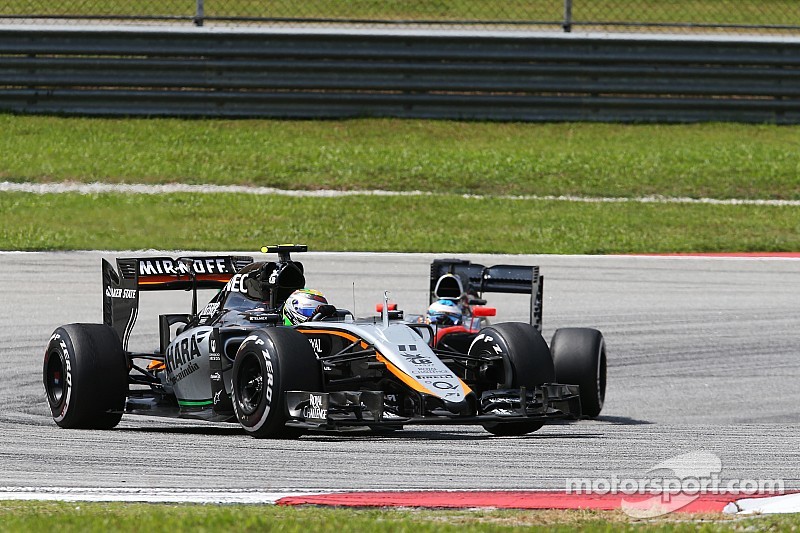 Sergio Perez (VJM08-02 - P13): “We knew ahead of the race it would be a big fight to get close to the points and it turned out to be just the case. I struggled with degradation in my first stint, on mediums, and that cost me a lot of time after the Safety Car. We had slightly better pace with the hard compound, but in the end it was not enough to get back in contention. The penalty didn't help us either; I felt I had nowhere to go and couldn't avoid contact with Romain. I thought it was a racing incident but it ended up costing us a lot. It's a disappointing result but at least we were able to learn a lot from this race and this will help us going forward.”

Nico Hulkenberg (VJM08-01 - P14 ): “It was a tough afternoon and I was always kept very busy with lots going on around me. I was really struggling with the general balance and the car was sliding around, especially as the tyres became older. We chose not to pit during the early safety car, which gave me good track position, but it was not an easy decision. We were trying to make the two-stop strategy work, but it just wasn’t possible with the degradation and so we switched to three stops. Perhaps it would have been better to commit to the three-stop earlier, but I’m not sure it would have changed the result that much. The penalty for the contact with Daniil [Kvyat] also dropped me out of the fight for points. I went a bit wide in turn one and chose to go back on the inside going into turn two. I was quite well alongside him, but he probably didn’t think I would try to come back at him.”

Robert Fernley, Deputy Team Principal: “It was a challenging afternoon for the team, although we were unlucky not to come away with at least a point. Both Checo and Nico gave everything in these conditions and featured in a lot of battles for the majority of the race. We seemed to have the measure of some of the stronger cars, but the penalties effectively cut us out of the fight for the top ten positions. We knew going into the race that we were lacking ultimate pace today and with a fully dry race there was not much that would disrupt the strategy or offer any opportunity to exploit. Now we need to regroup, continue our work back at base and come back stronger in the near future. Everyone is putting in a real effort to get us back where we belong quickly and it will be hugely rewarding when we are once more fighting closer to the front.”

Sauber do not score points in Malaysia