Safety in Formula One and NASCAR - There's always room for improvement

There's always places where you can make improvements in terms of safety; even in motorsports as safe as NASCAR and Formula One.

May 1st, 1994. February 18th, 2001. Those two dates are the last time a driver died during a Formula One and NASCAR race weekend. They are two forms of auto racing that should be very proud of the job they've done to make their respective disciplines safer for their participants.

Unfortunately, it took the tragic deaths of two icons for them to do anything in the first place. Since the loss of Ayrton Senna in Tamburello Corner at Imola and Dale Earnhardt in the third turn at Daytona, we've seen some terrifying accidents that drivers have miraculously walked away from.

You should never, under any circumstance, be content as a sanctioning body when it comes to safety though. That's when bad things happen. In NASCAR and Formula One, they always seem to have a reactive approach to safety. That goes for almost every single form of racing actually. 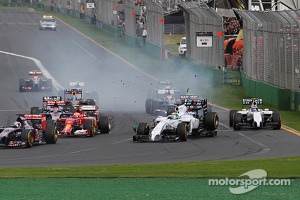 Kamui Kobayashi, Caterham CT05 crashes into Felipe Massa, Williams FW36 at the start of the race

There is always room for improvement, even when there doesn't seem to be. In F1, I'm still concerned about the lower noses that, as Adrian Newey said, will cause cars to submarine each other. We saw an example of that in the opening race of the season in Australia (pictured to the left). Kobayashi was lucky that it was gravel directly in front of them and not a wall. And how do we even protect against flying tires and other debris that might, and with dire consequences, find their way into a driver's cockpit?

In NASCAR, I just cannot comprehend why tracks as fast as Talladega and Daytona are not fully protected by SAFER Barriers. Daytona is in the process of a $400 million dollar upgrade to its facility, yet the addition of more SAFER Barriers is not part of the plan. Then there's the ever-present threat of a car getting launched into the catch fence. It amazes me how easily these seemingly invincible machines are completely torn to shreds after impacting a catch fence and reduced to nothing more than a smoldering pile of twisted metal and carbon fiber.

Last year at Auto Club Speedway, Denny Hamlin crashed into an unprotected wall and suffered a compression fracture in his lower back. Eric McClure suffered fairly major injuries a couple years earlier after hitting a wall at Talladega; one that was actually protected. What if that soft wall wasn't there?

The worst thing we can do is fool ourselves into believing that something tragic won't happen. Now, I'm not one to over hype something so let me make this clear. I know for a fact that the chances of a driver losing their life in a crash in these two motorsports is very, very low. The chances of even getting injured are low. But 'chance' is a dangerous term. Chance is the idea that something won't happen, but could.

NASCAR and Formula One have done more than most motorsports, and I applaud them for that, but there's always ways we can make it better. Death will always return to the race track whether we want it to or not. We have to be prepared to take every precaution necessary to protect the racers with the technology we have.

There are always subtle warning signs before tragedy. Things we overlook and disregard until it's too late. Those little things look so obvious in hindsight. I'm seeing little, seemingly insignificant red flags right now. They may mean nothing, but they could mean something, so let's take some initiative before they ever mean anything.

I also want to quickly address the contingent that believes the lack of danger and death is hurting ratings. You know what, you're right. Fatal accidents and cars barrel rolling never fails to earn the most attention and intrigue. Does that mean we should dumb down the safety of the sport to add more risk though?

How about you go look the four year-old son of Jason Leffler, Dan Wheldon's wife Susie, or Sean Edwards' mother in the eyes, and tell them that. I bet you can't, but if you could; well you should go reevaluate what kind of human being you are.

If that improbable and dark day actually comes and we lose another driver, we only have ourselves to blame. No matter how many soft walls you add or how secure you make a cockpit in death's wake, you can't get back what you lost the day these two titans fell.