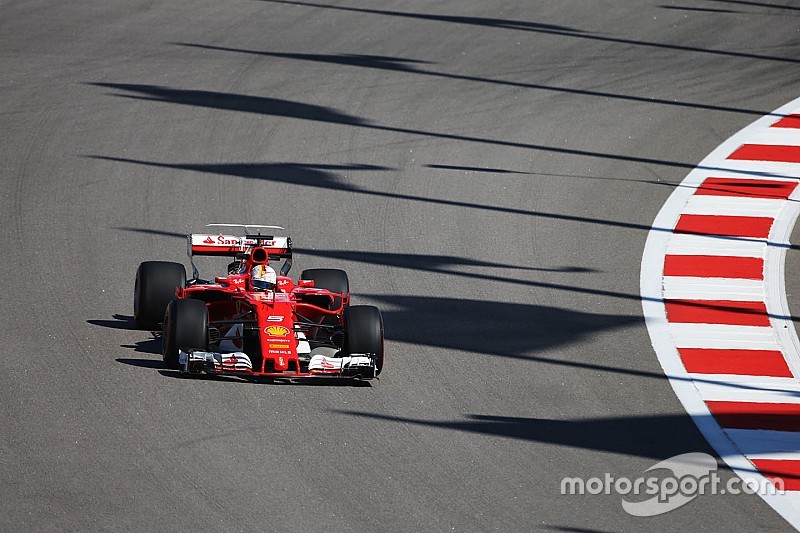 Sebastian Vettel continued Ferrari's dominance at Sochi as he set the pace in final practice for the Russian Grand Prix.

The German clocked a 1m34.001s on the ultrasoft Pirelli tyres, 0.337s quicker than teammate Kimi Raikkonen.

Ferrari and Mercedes headed out on the ultrasoft tyres early in the session as they battled to understand how to use their tyres in the most effective away ahead of qualifying.

After the first runs, Hamilton was quickest, 0.105s quicker than Vettel with Bottas third, a further tenth-and-a-half adrift.

With 20 minutes to go, Mercedes headed back out first, with Bottas going quickest with a 1m34.681s on his second timed lap, having done a build-up lap to get heat into the tyres.

Hamilton was on course to go quicker, using the same warm-up strategy, but made a series of mistakes in the final sector.

Raikkonen then put Ferrari top with a 1m34.338s before Vettel clocked the fastest-ever lap at Sochi with a 1m34.001s.

The German was on course to go even quicker and break the 1m34-barrier, but lost two tenths in the final sector.

Both Mercedes drivers improved on their second flying laps, but they stayed in third and fourth respectively.

Red Bull's Max Verstappen was best of the rest in fifth, but he was 1.451s off the pace, a few thousandths clear of Felipe Massa.

Verstappen's teammate Daniel Ricciardo, who momentarily stopped on track in the closing minutes of the session before getting going again, was seventh ahead of Renault's Nico Hulkenberg.

Toro Rosso's Carlos Sainz and Kevin Magnussen in the Haas completed the top 10.

Jolyon Palmer was the only driver who failed to set a time, with his Renault team deciding to change his engine ahead of qualifying.

That came after Renault's mechanics worked well into the night to complete a precautionary chassis change for the Briton after an exhaust leak on Friday.