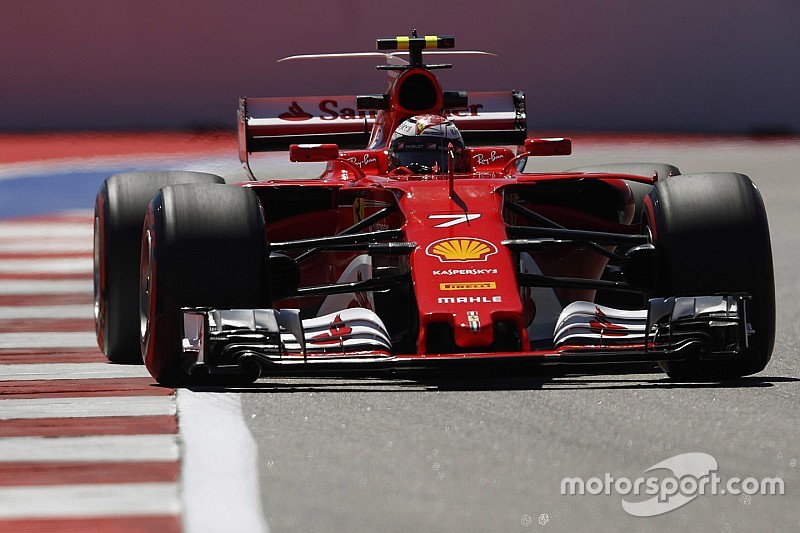 Kimi Raikkonen set the pace for Ferrari in the opening practice session for the Russian Grand Prix on Friday.

The Finn used Pirelli's supersoft tyres to post a 1m36.074s, outpacing Valtteri Bottas by 0.045s as Ferrari enjoyed another strong start following its victory in Bahrain.

Lewis Hamilton finished down in third, over sixth tenths of a second off the pace, after going off track several times during the 90 minutes of running.

Red Bull's Max Verstappen finished fourth ahead of championship leader Sebastian Vettel, who also had a less-than-perfect session as he ruined his flying laps on supersofts.

Daniel Ricciardo was sixth in the second Red Bull. He was followed by Sergio Perez in the Force India, and Williams drivers Felipe Massa and Lance Stroll.

On a day with clear skies and 34 degrees Celsius on track, it was Bottas who registered the first time of the session at the 10-minute mark following installation laps from all drivers.

Local hero Sergey Sirotkin had his first practice outing of the year with Renault - the Russian replacing Nico Hulkenberg alongside Jolyon Palmer - but his session was over before it's really begun as he stopped on track right as he started his out-lap.

Despite attempts from Renault to help Sirotkin on the radio to get the car restarted, the Russian driver had to be pushed off the track by the marshals and would not return for the rest of the session.

As the track was cleared, Hamilton moved to the top of the times with a 1m39.558s in his first run on soft tyres, over three tenths ahead of Bottas.

Vettel posted his first time of the day nearly 25 minutes into the session, the Ferrari driver going quickest with a 1m38.709s.

Vettel didn't last long on top, however, as Bottas used the supersoft tyres to outpace the German by over 1.3 seconds with a 1m36.998s. The Ferrari driver stayed on track and improved his best to reduce that gap to around seven tenths.

Before the 30-minute mark, Hamilton moved into second in the supersoft-shod Mercedes - six tenths behind his teammate - but Bottas went even quicker on the fourth lap of his run to set a new benchmark of 1m36.119s.

First Ricciardo, and later Bottas fell victim to the slippery track surface, both running off track. Hamilton had a bigger scare, however, as he became the first driver to hit the newly-installed speed bumps at Turn 2 after overshooting the braking point.

As the 40-minute cut-off arrived, only the Mercedes drivers and Toro Rosso's Carlos Sainz had completed a lap with the supersofts, the rest of the field having only run with the softs.

After some 15 minutes without any action on track, Kevin Magnussen broke the silence in the Haas, the Dane followed by several of his rivals.

With 30 minutes to go, Perez jumped up to third place in the Force India thanks to a run with supersofts, as Raikkonen went quickest with a 1m36.074s, the Finn also using the red-marked tyres.

The session was red-flagged with 25 minutes to go after Esteban Ocon lost the engine cover of his Force India under braking for Turn 2. The action resumed just a couple of minutes later after the debris was cleared.

Vettel was one of the first drivers to leave the pits as the action resumed, the German starting his first lap on supersofts. A mistake on his first flying lap at Turn 13 meant he failed to improve, however, despite setting the quickest time in the middle sector.

His second attempt did not go to plan either, the Ferrari driver spinning at Turn 16 after running too aggressively over the kerbs. The German managed to keep the car off the wall and rejoined the track after a quick stop in the pits.

Moments later it was Hamilton who went off at Turn 13, also avoiding the wall.

Verstappen improved late in the session to move up to fourth, the Red Bull driver jumping Vettel with a run on supersofts.

Stoffel Vandoorne's day came to an early finish when he reported "no power" a few minutes before the chequered flag.