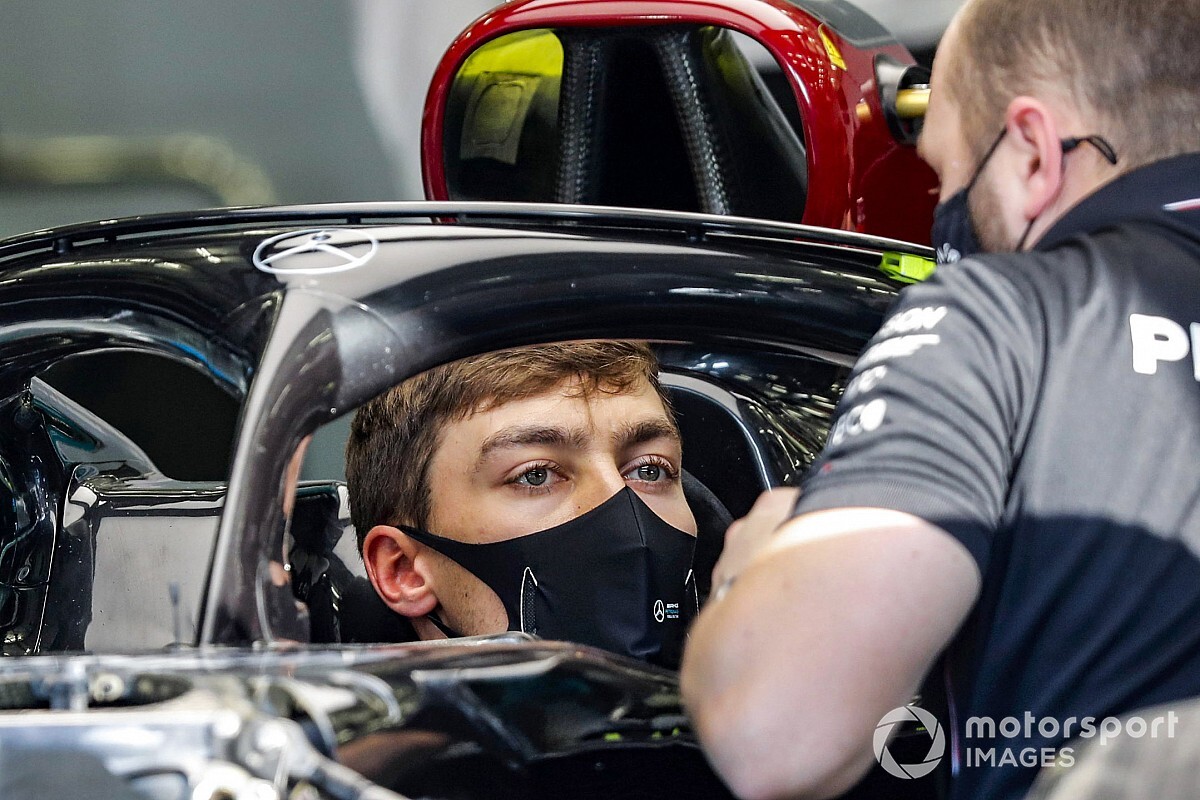 George Russell first heard he might replace Lewis Hamilton at Mercedes for Formula 1's Sakhir Grand Prix via a 2am phone call from Toto Wolff he took in the bathroom.

The Williams driver, a Mercedes junior since the start of 2017 - the year he won the GP3 title as a rookie - will drive alongside Valtteri Bottas after Hamilton tested positive for COVID-19 after winning last weekend's Bahrain GP.

His deal to compete in the race that will take place on the Bahrain International Circuit's high-speed, short 'outer loop' layout was announced the day after Hamilton's positive test was revealed on Tuesday.

When asked when he first became aware he might be switching teams for this weekend's race, Russell said: "I got a phone call from Toto at 2am on Tuesday morning.

"He said: 'Unfortunately, Lewis has caught COVID. He's doing well, he's healthy and feels fine, which is most important, but we want you to drive'.

"[I went:] 'Right, OK'. And then obviously a bit of a sleepless night.

"We just sort of made it happen throughout the following day. And I counted yesterday, I had 64 phone calls on Tuesday – pinging between so many different people.

Russell revealed that he was "very anxious" as he waited to find out "if we could strike a deal with Williams".

He added: "I need to say a massive thank you to them for allowing me this opportunity.

"And here we are, it feels strange to be back with Mercedes as obviously I spent two years there [as] test/reserve/simulator driver, so I know all of the guys, which makes things a lot easier to get back into the team.

"[I'm] just being bombarded with information at the moment to learn [and get] ready for the weekend ahead."

Russell explained that Mercedes had set him no special targets for his race debut at F1's dominant squad, saying his aim was to "do my best, as it always is".

"It's going to be incredibly difficult," he added. "Valtteri has been pushing Lewis a huge amount over the years. I know it's not going to be an easy task coming in.

"Any driver when you're in the groove, you're integrated into the team – I know the level I was at Williams, just having spent two years in the same car with my same engineers, same mechanics and, changing suddenly is [tough].

"So many new things to learn, so I've got no expectations, no targets. Just build up to it over Friday, learn as much as I can. Enjoy it. And just do my best."