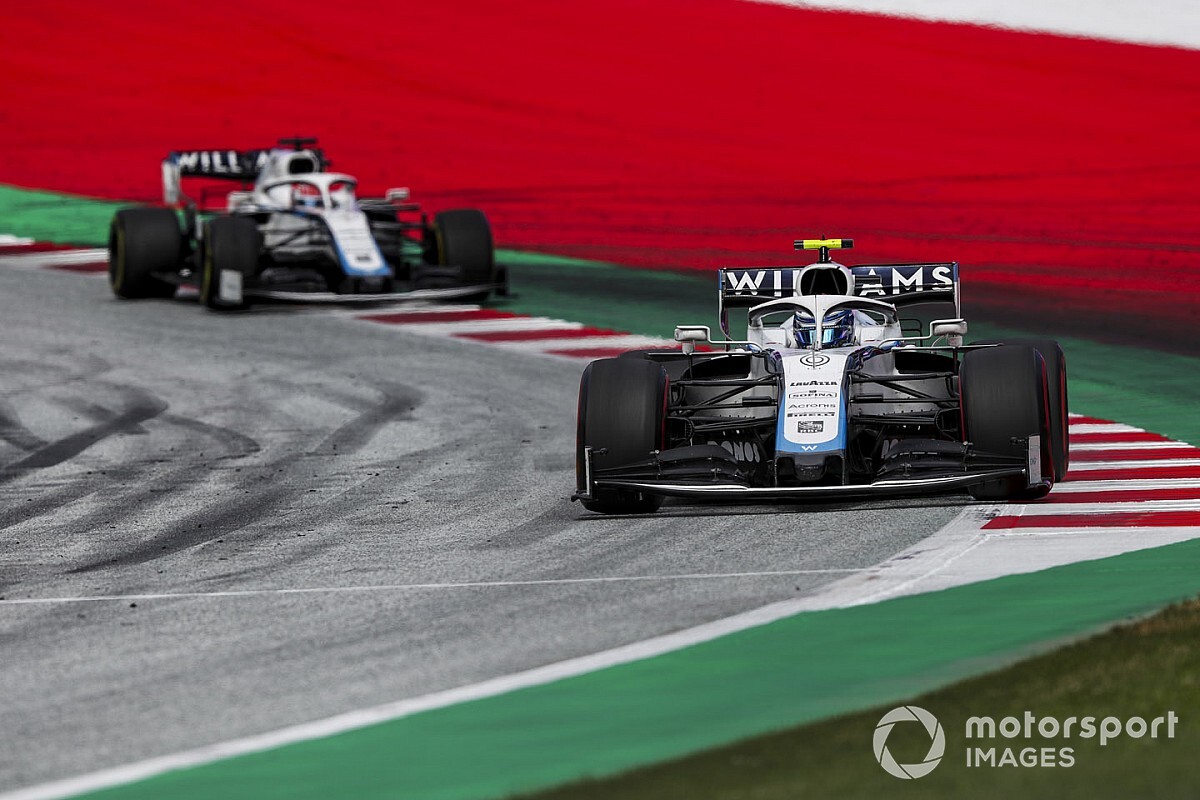 George Russell says Williams has been surprised by its lack of pace in race trim compared to qualifying in the two Formula 1 races at the Red Bull Ring.

The British driver qualified a career-best 12th for the Styrian Grand Prix after shining in the wet conditions and started one place higher following a penalty for Ferrari's Charles Leclerc.

But after running through the gravel at Turn 6 while battling Kevin Magnussen - which he accepted was "a complete driver error" - Russell dropped to last and finished two laps down in 16th position, one place ahead of teammate Nicholas Latifi.

Russell said afterwards that "we probably would have ended up in the same position had I not gone off" due to the FW43's lack of pace in race conditions.

"I completely hold my hands up for that, it wasn't good enough from my side but nevertheless it was a very difficult race from then on in with a huge lack of pace in comparison to our qualifying speed," said Russell.

"We approached the weekend thinking we would struggle a bit more in qualifying and then have a better race pace in comparison, that's what we learned in testing, it's actually also what we learned on Friday of Austria round 1.

"Yet both races and both qualifyings have been the complete opposite. We've had strong pace in qualifying and we've really struggled in all honesty in the race."

Latifi that he was disappointed the Williams cars couldn't compete with the Haas cars on race-pace.

The Canadian finished 11th on his grand prix debut in the attritional Austrian Grand Prix, but felt he "did a lot better job than I did the race last weekend".

"Obviously the result doesn't show that but we got that finishing position as a result of a lot of luck and just staying on the track," he said.

"It was difficult, we were not as quick as we thought we would be. I think we expected we would be able to at least have a chance of being able to fight with the Haases, but obviously it didn't turn out to be that way."

Russell said the Williams is a "relatively quick car in clean conditions", but "feels very sensitive from an aero perspective" in traffic.

"We're still learning the car obviously as are other teams and I hope that the aero department can go away and understand the issues and make some small changes just to give us a bit more of a stable platform when following other cars," he explained.

Russell added reaching Q2 for a second time in next week's Hungarian Grand Prix "has absolutely got to be the aim".

"On paper I'd say the car suits Hungary slightly better than it does here, which is a positive," he said.

"We do still have a very draggy car but in Hungary, the drag factor and the power unit side doesn't make such a huge difference."